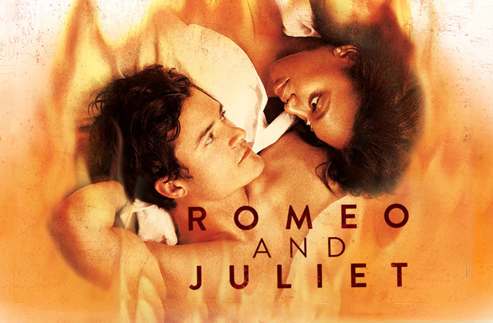 Orlando Bloom (Pirates of the Caribbean, The Lord of the Rings) and two-time Tony Award® nominee Condola Rashad (Stick Fly, The Trip to Bountiful) are turning tradition on its head as Broadway’s hottest, cutest, rule-breaking, heart-aching couple, Romeo and Juliet.

If West Side Story could change the classic tale of star-crossed lovers into a battle between rival gangs of Sharks and Jets, then this take on Romeo and Juliet sets the story as one between two rival families, one black, one white. Can true love conquer all?

In the Berkshires we have seen Romeo and Juliet many times over the years from Shakespeare & Company and others. But at New York’s Richard Rodgers Theatre it is, for the first time in over 36 years, it is actually on Broadway in a stunningly modern production from five-time Tony® nominee David Leveaux. In addition to Orlando Bloom and Condola Rashad, the cast of 25 includes Tony Award® winners Brent Carver (Kiss of the Spider Woman), Chuck Cooper (The Life), two-time Tony® nominee Jayne Houdyshell (Follies) and Christian Camargo (All My Sons).

So now that it has opened for a limited run (September 14 – November 24, 2013), the question is whether it is worth a trip to see. To help you decide, here is a selection of what the critics have said.

Ben Brantley, The New York Times: Mr. Bloom, in a first-rate Broadway debut, and the gifted Ms. Rashad exude a too-fine-for-this-world purity that makes their characters’ love feel sacred…Yet, while the production features stunning columns of flame as part of its eclectic mise-en-scène, it never acquires the fiery, all-consuming urgency that “Romeo and Juliet” should deliver…Good as she is in the early scenes, Ms. Rashad doesn’t yet have the vocal heft and variety to take Juliet into the echoing halls of tragedy…On the other hand, Mr. Bloom, famous for being handsomely heroic in the “Lord of the Rings” and “Pirates of the Caribbean” franchises, keeps surprising. For once, we have a Romeo who evolves substantively, from a posturing youth in love with love to a man who discovers the startling revelation of real love, with a last-act descent into bilious, bitter anger that verges on madness.

Joe Dziemianowicz, New York Daily News: Bloom throws himself thoroughly into the role of the lovestruck Italian – ticket-holders get to see him shirtless, climbing walls and flexing his gymnastic abilities. More importantly, he speaks Shakespeare’s poetry capably. But he lacks the gravity to really grab you. Together, he and Rashad are warm, not hot. If Romeo and Juliet don’t blaze, why bother?

Elisabeth Vincentelli, New York Post: The most mesmerizing of the lot is Christian Camargo. As Romeo’s disenchanted, provocateur pal, Mercutio, he languidly delivers his razor-sharp lines. It’s as if the character was fatigued by life itself – yet he energizes the stage whenever he’s on. And he doesn’t even need to ride a motorcycle.

Simon Saltzman, Curtain Up: What a winning and attractive pair Bloom and Rashad are as the lovers who are as blind to the hatred between their families as they are wide-eyed by the one and only emotion that really matters. Leveaux continues the tradition of moving the oft-transported and transplanted star-crossed lovers to a time and place remote from Shakespeare’s Renaissance, Italy.

The revving of a motorcycle is heard and into the fray rides Romeo. In equal measure, to the delighted squeals from many of the young women in the audience, was the muted laughter from others as Romeo smiles and removes the black helmet from his head to reveal his curly hair. But it’s the obligatory hoody and jeans shredded at the knees, and particularly those snazzy oxblood boots, that set him fashionably apart from his peers.

Britisher Bloom, who is best known for his film roles in The Lord of the Rings trilogy and in The Pirates of the Carribean, is not only making his Broadway debut but allowing the role of Romeo to validate his talent as a trained actor. He’s good-looking and trim, with enviable abs. He’s athletic to boot, as demonstrated by an impressively acrobatic flip off the edge of Juliet’s balcony in the famous morning-after-the-night-before scene. Bloom proves himself much more than your typical, self-impressed teenager, making a convincing case for suffering and angst while also grappling with the part’s histrionics.

Mark Kennedy, Associated Press: Credit David Leveaux with trying to make Shakespeare cool, even if this uneven production sometimes misses the mark by falling in love with its visual effects…Bloom and his Juliet, the rising star Condola Rashad, sometime seem out of synch emotionally, but both give it their all, the stage veteran Rashad emerging better than her opposite, a relative theatrical novice…Bloom, a matinee idol, too often appears like a squinty, aging boy band member, while Rashad embraces a coltish, youthful impulsiveness. They are terrific when they kiss, and they do so with a frequency perfectly in synch by their characters’ savage love. But when they’re apart, the weight of these roles seems to push them down.

Terry Teachout, The Wall Street Journal: Would that Mr. Bloom’s big entrance led to something interesting, but this “R & J” is a slick, weightless assemblage of modern-dress trickery (Romeo wears a hoodie and jeans) whose conception is as stale as its been-there-seen-that décor and TV-movie music. From the low-impact knife fight to the brutally abridged tomb scene (what happened to Paris?), it proceeds systematically along its overfamiliar way, never missing a chance to be obvious. When the star-crossed lovers paw one another lasciviously at their first meeting, you can almost hear Mr. Leveaux assuring himself, “That ought to thrill the kiddies.”

Marilyn Stasio, Variety: The kids are all right. That’s the takeaway from “Romeo and Juliet,” with movie heartthrob Orlando Bloom and ingenue stunner Condola Rashad as Shakespeare’s star-cross’d lovers. The interracial casting of the feuding Montague and Capulet clans sounds bold, but has surprisingly little dramatic impact. The tragedy also survives its gimmicky update to modern-ish times. Bottom line: This enduring love story stands or falls on the appeal of its lovers, and the young stars bring a sweet passion – if no ear whatsoever for romantic poetry – to their immortal roles.

David Rooney, The Hollywood Reporter: The poster shot of Orlando Bloom and Condola Rashad for Romeo and Juliet, clad in purest white and lost in each other’s eyes on a bed of snowy linens, could be a perfume commercial. Let’s call it William Shakespeare’s Obsession. But the dreamy intoxication that such a heady fragrance might transmit is largely missing from David Leveaux’s snoozy modern-dress production, along with poetry and heat. Bloom is the big name on the marquee and he makes a confident Broadway debut, roaring onto the stage on a motorcycle no less. But such contemporary trappings never quite amount to a distinctive edge.

Elysa Gardner, USA TODAY: Bloom is without question a graceful stage performer, and still looks pretty youthful at 36. But the gap between his suave Romeo and Rashad’s breathless, girlish Juliet is glaring. They bring to mind less a couple of kids defying a harsh world than a really nice rock star and his groupie. Incidentally, in this staging, the Montagues are white and the Capulets black. Leveaux doesn’t overtly make race a factor in the family feud, but there are subtle nods — as subtle as anything here, anyway — to cultural differences…for all its style and bluster [Romeo and Juliet] fails to produce a compelling connection between its stars or with the audience.

Michael Dale, BroadwayWorld: Regrettably, it’s the stage-long row of flames that rises from the floor and makes the occasional dramatic cameo that provides any kind of heat in director David Leveaux’s soggy production of Romeo and Juliet. Despite the presence of some fine actors who manage to light some sparks here and there, this gimmicky rendering of Shakespeare’s tale of adolescent lust gone tragic is curiously lacking in tension, passion, romance and, for some cast members, clear diction.