“Accomplice” at Shakespeare & Co is smart, funny, sexy and well worth seeing 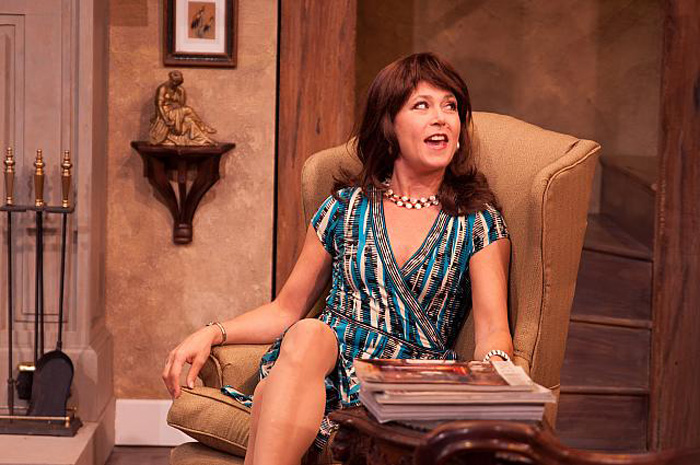 “Accomplice” at Shakespeare & Co is smart, funny, sexy and well worth seeing

ABOVE: The montage of scenes from Accomplice only hints at the complexities of this show’s many twists and turns. Photos by Enrico Spada.

How do you write a review of a comedy/thriller with a plot so convoluted and hilarious that even listing the names of the actors would give away important plot points? A show where, at the curtain call, the cast swears the audience to complete secrecy? Well, you start by saying that this production of Rupert Holmes’ Accomplice at Shakespeare & Company, directed by Stephen Rothman, is smart and funny and sexy and well worth seeing. The cast, who I may not name, is very good. A slightly stumbling performance by an old favorite is balanced out by a nice turn from a newcomer. Patrick Brennan has designed a nifty set which, abetted by James W. Bilnoski’s lighting and Ian Sturges Milliken’s sound design and score, is almost as full of surprises as the script

Accomplice was the third theatrical outing for the fearsomely prolific and multi-talented Holmes, who had already won multiple awards for his first show, Drood (1985, formerly titled The Mystery of Edwin Drood). Holmes took home is his second Edgar Award from the Mystery Writers of America for this 1990 opus, which holds a special place in Rothman’s heart (he has directed it twice before.) Rothman saw a good fit between this script and some of Shakespeare & Company’s core actors, and he was right. I am not telling tales out of school when I say that it gives Elizabeth Aspenlieder another star turn as the Company’s leading comedienne.

If you love a good whodunnit, you will adore this show. It is not only a whodunnit it but a who gets done. Just when you think someone’s dead as doornail, they’re not. In his program notes Rothman offers to buy dinner for an audience member who, having never seen or heard anything about this play before (that would be cheating, folks), can correctly guess at intermission how the show will end. I certainly couldn’t claim the prize!

If you enjoy seeing attractive ladies in various states of undress, you will like this show. I could grumble that there is no collateral eye-candy for those of us who like to see attractive men scantily clad, but that is often the way of the world. Just be warned that Accomplice contains adult situations and language including partial nudity, explicit language, and gunshots.

If you delight is clever wordplay and fresh, hilarious jokes (along with a few gloriously bad old groaners as well), you will have a ball at Accomplice. Holmes is a very sharp writer with an ear for the various genres he is spoofing here. I think this production does clock in at about a laugh a minute, while also being suspenseful and gripping, which is a neat trick.

This one might be a little racy for the very young and uber-uptight, but otherwise it is a lovely fall treat full of thrills and laughs. Its the kind of show I would even see a second time.