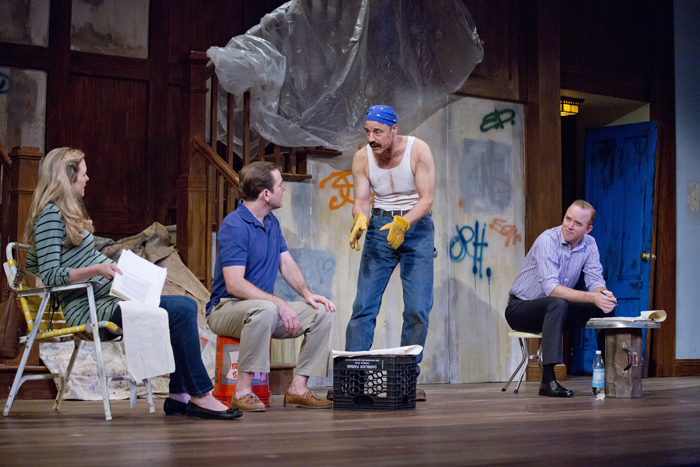 Gail M. Burns: Clybourne Park is a continuation of Lorraine Hansberry’s iconic 1959 play A Raisin in the Sun. There we watch the black Younger family’s struggle to escape from the ghetto by buying a home in the all-white Clybourne Park neighborhood in the near northwest of central Chicago. The first act of Clybourne Park takes place in 1959 in the home the Youngers are trying to buy, showing the backlash against the white owners by the same Karl Lindner who attempts to buy the Youngers out of their contract in Raisin. The second act takes place 50 years later, in 2009, and contains some fascinating parallels in both character and plot, even though none of the characters from Act I recur.

Larry Murray: It’s about as daring a play as I have ever sean, a searing evening of theatre that lingers long after the final curtain. It deals honestly with racial issues, and just how scared and uncomfortable some people get just talking to one another about it. It is a hot button topic, but some people just freeze at the mention of the subject. Under the cover of entertainment, this play is very subversive in that it skewers us all for dancing around subjects we are less than comfortable with.

Gail: In exactly two hours playwright Bruce Norris manages to have his cast of seven touch on every uncomfortable human prejudice – race, of course, but also physical and mental disabilities, mental illness, war and veterans’ affairs, religious differences, class warfare, you name it!

Larry: As a play it is incredibly well constructed, with everyone in the cast playing two different roles. And an incredible Kevin Crouch played three, as a matter of fact. That makes the acting a real challenge, especially with such clearly delineated characters, don’t you think?

Gail: Norris’ jumping off point was imagining what was happening to the white family that owned the Clybourne Park home the Youngers were buying. So he has invented Bev (Carol Halstead) and Russ (Remi Sandri), their black housekeeper, Francine (Lynnette R. Freeman), and her husband, Albert (Andy Lucien), their neighbor and pastor Jim (Kevin Crouch), and the story of the suicide of their son Kenneth (also Crouch), a Korean War veteran, out of whole-cloth. It is a compelling story, and, just like the compelling family saga Hansberry created, into the middle of it all crashes Karl Lindner (Greg Jackson) of the Clybourne Park Improvement Association, this time accompanied by his deaf, pregnant wife, Betsy (Clea Alsip). In both cases Lindner’s persistent racist and classist demands and threats upset an already delicately balanced family dynamic.

In the second act Halstead plays Kathy, the lawyer for Steve (Jackson) and and his pregnant wife Lindsey (Alsip), the prospective buyers for the now derelict house. They are meeting with Lena (Freeman) and her husband Kevin (Lucien), representing the community association, and their lawyer, Tom (Crouch), ostensibly to discuss and reach a compromise on the nonconforming aspects of the new home Steve and Lindsey plan to build on the property. Outside Dan (Sandri), and his construction crew are preparing the property for the demolition the following day. A chance discovery during the removal of a dead tree brings the story full circle.

Larry: All the actors just floored me with the authenticity of their characters. I know that the real credit comes down to the words which Bruce Norris wrote for the play.

Gail: It won the Pulitzer Prize for drama in 2011 followed by the 2012 Tony for Best Play. Norris, who is white, wrote Clybourne Park in response to A Raisin in the Sun, and now Kwame Kwei-Armah, a black British playwright/director, has written Beneatha’s Place in response to Clybourne Park. CenterStage in Baltimore, where Kwei-Armah is the Artistic Director, mounted all three plays as The Raisin Cycle about which PBS will air a documentary on Friday, October 25 at 9 pm.

Larry: Having been fresh out of high school in 1959 I lived through what was called “block busting” by many in the white community and the horrendous charges and counter-charges that people used to justify their feelings that the “coloreds” were getting to uppity and out of hand. I heard the discussions of my parents and neighbors, and they were not pretty. Norris accurately captured many of the same threads I heard first hand, and Clybourne Park portrays the clash a lot more politely and with a great deal more humor than what I remember, especially the first act.

Gail: It is the entanglement of race relations with real estate/money that sets off the firestorm in both 1959 and 2009. In the second act we see what happens when a white couple wants to buy, and demolish, the house at 406 Clybourne Street to build a “MacMansion” in what is now a predominately black, working class neighborhood. The community association is now fighting gentrification and the process of being priced out of their own neighborhood.

Larry: The second act sure captured the multi-tasking, off-topic and unfocused discussions that pass for local politics today. Endless debates about the capitol of Morocco and formal statements about the meaning of neighborhoods take place all the time instead of delving into the real issues. Back in the late 1980’s I was involved in one preservation cause that debated not whether buildings should be preserved , but rather restored to when YOUR people lived there, or MY people lived there. That’s the kind of question that really makes you stop and think about the whole concept.

Gail: Director Giovanna Sardelli returns to Barrington Stage, where she has previously directed The North Pool, Lord of the Flies and this season’s Muckrakers. She is a resident director at the Dorset (VT) Theatre Festival, which co-produced this production. It actually opened in August up in Vermont, and you and I debated seeing it then rather than waiting until it came to Pittsfield in the fall. As residents of northern Berkshire County, we are about 50 minutes south of Dorest and 40 minutes north of Pittsfield. While I am all in favor of co-productions, and I can clearly see how BSC Artistic Director Julianne Boyd, DTF Artistic Director Dina Janis, and Sardelli share a similar theatrical vision, I wonder if these two particular companies don’t serve overlapping audiences.

Larry: Sardelli is certainly very good at what she does. She managed to line up seven people across the stage so that we could see and hear all of them, yet it never looked stagey at all, She broke the actors into family/couple groups and arrayed them on packing boxes and furniture in the first act, improvised and collapsible seating in the second, with people moving flowing around the house as they took phone calls, arrived and left. It has a real natural flow to it.

And I just loved the house itself, the set by Narelle Sissons.

Gail: I cannot imagine the set we saw at BSC fitting on the Dorset stage. I commented that I thought the proportions were off-kilter, and suspect that was the result of the effort to retrofit it on to the BSC Union Street stage. The set, which represents the sitting room of the Clybourne Park home, has a ceiling – punctured in a few places to allow for lighting – and an attic. The last set I remember seeing with those unique elements was the set for A Raisin in the Sun at the Williamstown Theatre Festival in 1999 [Review]. That did much to tie the two plays together for me visually.

Larry: I just love “method” sets and “method” props as you know, and this monster of a house even had an attic and a cutaway under the house of the floor joists. That kind of attention to detail makes me go all wobbly in the knees, perhaps because I spent so many years building and prepping sets myself. My only complaint is that the items stored in the attic did not change at all from 1959 to 2009. Stuff goes up there and is forgotten, I guess. What kind of marks do you give the overall production/technical aspects?

Gail: Both Dorset and Barrington Stage have high production standards, so I was not at all surprised that this show looked great. The costumes by Barbara A. Bell were spot on, capturing perfectly what real people wore in daily life in the two distinct eras. Kudos also to Michael Giannitti, who must have been challenged to light a set designed for a different stage. Both acts take place in “real time” between 3-4 pm on a September Saturday, and both the lights and costumes felt right.

Larry: I was impressed by the workman’s wife beater shirt and its sweat stains which you can see in the photo montage above. Gritty details like that and the aging of the storage truck always work for me.

Perhaps that’s why the music/sound track is so important too. I knew I was in familiar territory when I first sat down when I recognized every song playing before act one began, and even found myself singing along to Jambalaya. Funny how things stick with you. Is this a play for just those who lived through both periods, or is it also a bit of a history lesson. Who should see it, and given some of the second act jokes, are there any cautions?

Gail: Well, Norris does touch on many, many hot button issues in both acts, and yes, the “jokes” in Act II are tasteless and offensive. I loved when one of the characters says that she hates a joke not because of its blatantly racist, but because it isn’t funny. There’s something to offend everyone here, but that is part of the point the playwright is making.

Barrington Stage always selects its fall show with educational opportunities for school groups in mind, and I think Clybourne Park would provide an important and eye-opening lesson for high school juniors and seniors and for college students considering careers in community planning or social services.

Larry: I think every one of my friends and family should see this, it would open up some areas of discussion they tend to be – like the characters in the play – a bit squeamish to explore, partly for fear of saying something politically “incorrect”. But the thrust of the second half of the play is not so much the race issues, but the zoning and economic constraints that are employed to remake old neighborhoods. And that is the genius of this play: while we were all thinking, talking and debating race, the economic opportunists were having a field day while we were dithering.

That’s what makes this play so wonderful, it is not just about race, bur rather a mirror turned on all of us, and how we so often get caught up in the wrong issues when planning our futures.

Gail: It is important to remember that Hansberry based Raisin on her own family’s lawsuit (Hansberry v. Lee, 311 U.S. 32, [1940]) which disputed a racially restrictive covenant, set during an earlier legal battle in 1934, that barred African Americans from purchasing or leasing land in the Washington Park neighborhood of Chicago. Lorraine Hansberry wrote in To Be Young, Gifted, and Black: “That [law suit] also required our family to occupy disputed property in a hellishly hostile ‘white neighborhood’ in which literally howling mobs surrounded our house… My memories of this ‘correct’ way of fighting white supremacy in America include being spat at, cursed and pummeled in the daily trek to and from school.” The home the Hansberrys bought in 1937 was given landmark status by the Chicago City Council’s Committee on Historical Landmarks Preservation in 2010, but the fight continues…