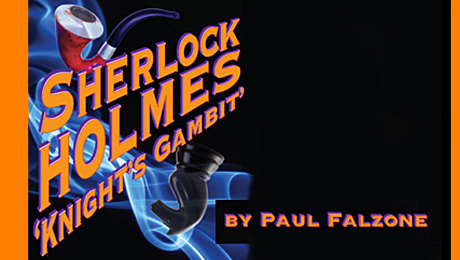 Larry Murray: Early in the development of Paul Falzone’s Sherlock Holmes – Knight’s Gambit we heard that Nigel Gore was going to play Holmes, and we were both pretty excited in seeing this brilliant actor – often Tina Packer’s onstage partner at Shakepeare & Company in Lenox – in a very different role. But as Oldcastle’s director Eric Peterson explained before the performance began, Gore had to bow out and open auditions were held for his part in New York City on Friday, September 13, a mere two weeks before the original opening night. Rehearsals were delayed, and the opening was pushed up a week as Nick Plakias took the title role at the last minute.

Gail M. Burns: I understand that Gore’s mother fell ill, requiring him to head home to Great Britain. Of course we wish her a speedy recovery and look forward to welcoming him back to New England soon, but a real life crisis like that creates problems of a very different nature for a theatre company. Significant income from fall productions come from school groups, and postponing or canceling those bookings can be devastating for finances and community relations.

Larry: Plakias and the cast which included Richard Howe, Scott McGowan and Bill Tatum first appeared on stage as if nothing untoward had happened, but it wasn’t too deep into the first act when Plakias liberated his script from under the chessboard and began to refer to it in quick glances, as if to be sure of his next cue. It was clear he knew the script – or at least 95% of it – but was not yet on solid ground.

That got me thinking about how amazing actors and theatre companies are when faced with the adversities of life. We don’t think of actors as people who get indigestion or the blues, have family members who get sick, or worse, and while there are understudies for major shows on Broadway they are not at all common in regional or community theatres.

“The show must go on” is perhaps the most familiar phrase in theatre, and in the case of Knight’s Gambit, I took the opportunity to watch this production to see how the veterans at Oldcastle coped with the sudden change, and so my view of the play was not as a critic but as a detective myself. If a line was flubbed, I watched for signs that the other actor(s) visibly reacted. (They didn’t.) And when a line was said and the cue was not picked up, again the techniques used to mask that came into play.

In the end I thoroughly enjoyed Knight’s Gambit as an example of how a cast and company respond to adversity, too little rehearsal time and the pressure to get on with the show

The actors on stage were less polished than the the wonderful set and technical aspects of the production, which were up to the usual Oldcastle standards which are very high. I am still in awe of their Cinerama style set design by Carl Sprague, which, without a proscenium, makes for a totally immersive theatrical experience.The lighting by Keith Chapman was top notch, too.

Gail, I seem to have spent my time on the story behind the production, so I better shut up and let you tell everyone about the play itself which is a “new” Sherlock Holmes mystery by one of Oldcastle’s founding members, Paul Falzone.

Gail: Sherlock Holmes is “hot” once again – not that he has ever really been far from the popular consciousness since Sir Arthur Conan Doyle created him back in 1887 – but new film and television versions starring big box office stars like Robert Downey, Jr., Benedict Cumberbatch, and Jude Law have brought a new generation of rabid fans to the franchise, and their huge success proves that there is nothing wrong with reimagining and updating the exploits of the most endearing male duo since Cervantes conjured up Don Quixote and Sancho Panza.

Falzone has done just that. He has created a new Holmesian adventure, based on the principles of the game of chess. What he has failed to do is align his Holmesian world with the basics set down by Conan Doyle. The play clearly takes place during the 1901-1910 reign of Edward VII, and I would have guessed that it took place later in that time frame since the early warning signs of World War I are alluded to, but Professor James Moriarty “died” in 1891, ten years before Edward VII took the throne! Inspector Lestrade doesn’t appear in a Holmes tale set after 1902. And after 1904 Conan Doyle has Holmes retire to a small farm on the Sussex Downs where he takes up beekeeping, while here he is still living and working as a detective at 221B Baker Street in London. These slips will cost Falzone the respect and patronage of most serious Holmes fans.

During a curtain speech for the Oldcastle production of Fox on the Fairway, Peterson assured the audience that Knight’s Gambit would be an “old-fashioned Sherlock Holmes, Arthur Conan Doyle’s Sherlock Holmes.” Falzone’s version is old-fashioned, but it is not Conan Doyle’s. Falzone harks back only as far as the mid-20th century Hollywood films starring Basil Rathbone and Nigel Bruce. Those films showed an older, humorless Holmes and a positively doddering Watson, much closer to Cervantes’ Sancho sidekick model than to the lithe, athletic medical professional Conan Doyle created.

Larry: With a run of just three weekends, I suspect that things will be flowing much more smoothly by this coming weekend. And as long as you are not a Conan Doyle purist, this handsome production will be well worth a visit to see what Holmes, Watson and Moriarty are up to this time. Moriarty is only mentioned in two of the 60 mysteries, but seems to have become an idée fixe for writers who want to continue the storyline.

Gail: Sherlock Holmes: Knight’s Gambit had its premiere just a few weeks ago at the Cider Mill Playhouse in Endicott, NY. http://www.cidermillplayhouse.com/ In fact that production is still playing as this second iteration opens at Oldcastle. If Cider Mill had matinee performances I would be tempted to take a road trip to compare the two productions. I suspect that I would see a very different play, unless the endless script changes alluded to by Peterson are being replicated in real time in Endicott too. It really isn’t fair to actors or audience to keep tweaking a script while the show is up. If that is what has been occurring it is no wonder the actors are struggling frantically to remember what their lines and cues are, last minute cast changes aside.

But once the curtains fall in Bennington and Endicott, I encourage Falzone to keep writing, possibly even to consider setting the play in Holmes bucolic post-retirement apiary. The possibility for word play between chess queens and queen bees (Conan Doyle has Holmes pen a book entitled Practical Handbook of Bee Culture, with some Observations upon the Segregation of the Queen) abound!