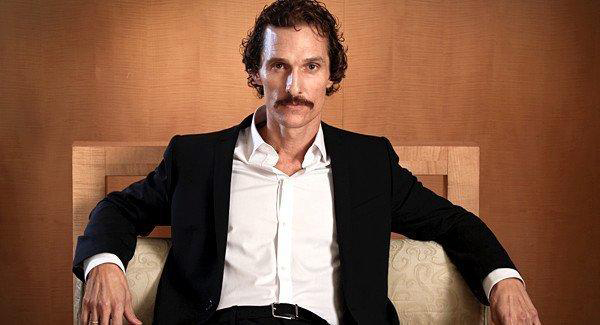 It played at theatres in the Berkshires in November. It has been talked about ever since. I think it is one of the must-see movies of the year. Here’s why.

In the early days of the AIDS crisis perhaps the only person angrier and more motivated than Larry Kramer of AIDS Coalition to Unleash Power (ACT UP) was the super macho, homophobic rodeo bull rider, con man, womanizer and substance abuser Ron Woodroof. The film Dallas Buyers Club has been criticized for not focusing on the gay elements, but that is because it is inspired by true events surrounding Woodroof (Matthew McConaughey) and his battle with the medical establishment and pharmaceutical companies after being diagnosed as HIV-positive in 1986. He finds the AZT trials flawed, gets his own supply from Mexico and then overdoses on the toxic drug. He decides it is not the only answer, and in fact, not even a good one. (Back then they gave patients far too much of the stuff, actually destroying their immune system, rather than helping it.)

He then begins his search for alternative treatments. At first wary and contemptuous of anyone gay he refuses to attend self-help groups that proliferated in the early days of the disease. Eventually he teams up with a transvestite, Nylon (Jared Leto). Together they figured out a way to provide HIV-positive people the drugs that were illegal in the US. These were the terrible days of an FDA under Ronald Reagan and a AWOL medical-pharmaceutial cartel. Everyone seemed to drag their feet on allowing drugs proved hopeful elsewhere to be sold here.

From the President of the USA to local doctors, the entire establishment seemed to be hostile to any fresh and innovative thinking, Eventually McConaughey’s character wins over Dr. Eve Sacks (Jennifer Garner) and some of his speechifying and legal wrangling eventually helps to speed up the testing and approval of drugs that today are able to treat most of the symptoms of AIDS.

For the film both McConaughey and Leto went through months of dieting to lose huge amounts of weight so they would appear gaunt and ill.

When they form a partnership to provide helpful drugs to other HIV patients, it makes for one of the oddest couples ever thrown together in a film. In fact, Rayon’s understanding of the macho McConaughey usually enables him to keep the brooding hothead out of jail and court. But his own ongoing addiction to drugs and sex diminishes the effectiveness of the drugs and shortens his life in the end.

The roundabout method for selling these helpful drugs was actually simple. They charge members $400 a month to belong to the Dallas Buyers Club. Member privileges include unlimited access to experimental and non-FDA approved prescriptions. Rayon is the recruiter for these memberships who mostly come from the ranks of the very self-help groups set up to deal with the medical establishment and lack of home care support.

The film is brilliantly written by Craig Borton and Mellisa Wallack and directed by Canadian Jean-Marc Vallée. The film has Oscar potential too. I think there is reason to consider Matthew McConaughey and Jared Leto both for Oscar nominations, and if one measure of that is popularity, then the box-office receipts have been surprisingly high for its limited release. And it scores high at Rotten Tomatoes.

UPDATE 1/16/14: As it turns out, the film has drawn six nominations for Oscars this year (Best Film, Best Actor (Matthew McConaughey), Best Supporting Actor (Jared Leto), Original Screenplay, Film Editing and Hair and Makeup), the DVD release is starting to get some buzzz. Here’s a sneak preview of one of the bonus features that will be included in the DVD, scheduled for release on Blu-ray and DVD on 2/4/13

Some critics have objected to the “straight hero” in this story about AIDS, but the point is that HIV is not “the gay disease.” You may find the film extraordinarily compelling since the outrageously straight guy was anything BUT predictable. Even so, the film ignores the fact that it was Ronald Reagan who was President, and it relegates the AIDS activists like Larry Kramer to a few seconds of screen time on a television set that Woodruff glances at and then ignores. The AIDS crisis has always had many complications to it, and no one film can cover them all. A film could be made on the devastation it caused to the Hemophiliac community, and the unnecessary stigma it placed on Haitians, too. It is the terrible disease that just keeps on giving.

If you lived through the AIDS crisis, took part in ActUp and lost friends, this film will reconfirm the ugly truth that it took a lot of us to get the helping professions to actually help. If you were born after those horrid years, you should see it too, since it applies to the resurgence of AIDS among young people who mistake the palliative drugs for a cure. None has been found for this exceptionally labyrinthine and tenacious disease once it takes hold. Each year, 50,000 new cases of HIV are reported. What literally makes my heart ache is that one-in-four of those who are diagnosed are under the age of twenty-four. On the bright side, there is an FDA approved prevention drug – Truvada – and many people mistakenly think it avoids the necessity of using protection during sex.

The film does not get up to speed on the current state of treatment and prevention, but as history through the Hollywood lens, it’s one fine story, with some Oscar-worthy acting and writing in a year that has relied far too heavily on CGI special effects and formula franchise features to entertain us. This is a real drama, with real suspense. Seek it out.

Larry Murray is a member of the Gay and Lesbian Entertainment Critics Association which votes on the Dorian Awards each year. This film is under consideration for the 2013 nominations.