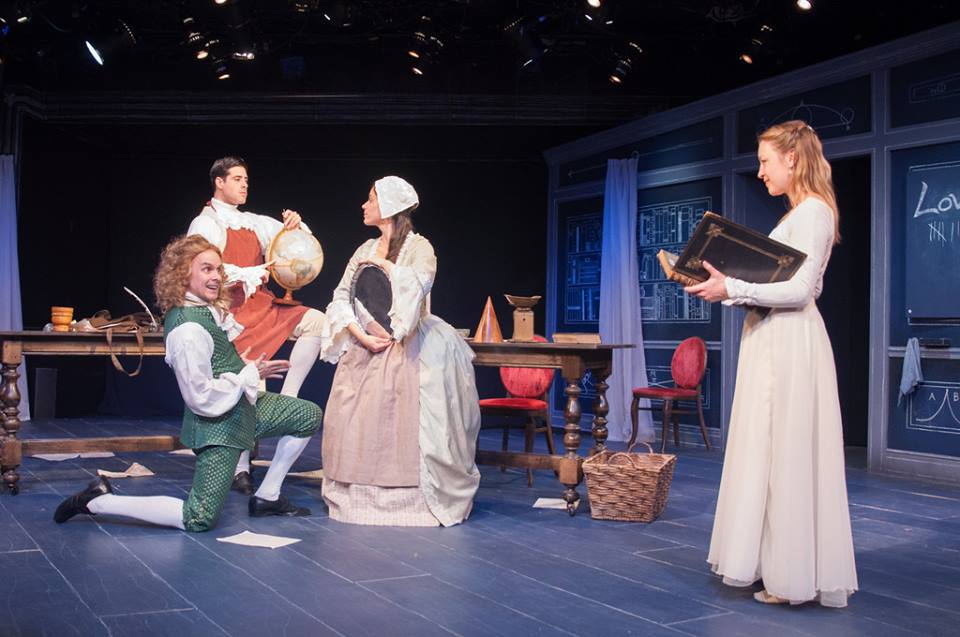 Review and Discussion by Gail M. Burns and Larry Murray

Gail M. Burns: I am a sucker for the story of a remarkable woman well told, and that is exactly what Lauren Gunderson has done in her ponderously titled Emilie: La Marquise Du Châtelet Defends Her Life Tonight about the life and work the titular lady, who lived from 1706-1749. She was a mathematician, a physicist, an author, a wife and mother, and the lover of Voltaire (ne François-Marie Arouet, 1694-1778).

WAM Artistic Director and the director of the production, Kristen van Ginhoven, reports that she got chills the first time she read the script. She has transferred that initial excitement into a fine production, beautifully designed by three more talented women – Juliana von Haubrich (sets), Govane Lohbauer (costumes), and Andi Lyons (lights) – and performed by a cast of five (three women, two men) anchored by a heartbreakingly perfect performance by Kim Stauffer in the title role.

Larry Murray: I gave up on male writers trying to fathom the mind of a woman a long time ago. But this Emilie gave me one of the best looks inside a woman’s mind to date. What the playwright Lauren Gunderson has done – through her near stream-of-consciousness script – is make it clear that when the clash of the sexes takes place, with Emilie it was her heartfelt desire for truth that led her to break society’s rules, while with Voltaire, it was ego and desire to protect the established order that led him to undermine her. And as it turns out this is a good topic for entertaining theatre.

Gail: Gunderson’s Emilie is a very modern woman, but her story is a remarkably modern one too. Until very recently few women had the opportunity to be educated in math and science, let alone practice in either of those fields. And the few that did were seldom listened to or taken seriously by the male establishment. That Emilie was accepted into the Republic of Letters and won a prize from the Academy of Sciences is astonishing. She published in several fields, and her translation of Isaac Newton’s Principia Mathematica is still considered the standard version in French. Women didn’t get to do these things, but she did, and did them remarkably well.

Larry: In our culture women are often portrayed as caricatures, but in Emilie I was astounded at how fully formed she was. If anyone was reduced to a cartoon, it is Voltaire whose characterization reminded me of the young Mozart in Amadeus. While Emilie was thinking out loud and doing her calculus on the blackboard, she was clearly thinking with her brain in logic mode. When Voltaire was engaging her, he was often thinking with his penis. As one wag said, no man has enough blood to use both his penis and his brain at the same time, and that does seem to explain a lot. The evidence for this is in Voltaire’s writings which include this passage: “All the reasonings of men are not worth one sentiment of women.” The source was the penis. He also wrote that Emilie is “a great man whose only fault was being a woman” which was written with his ego.

Gail: Gunderson does a fine job of integrating Emilie’s sexuality into her everyday existence, as would have been the case in 18th century France. American culture still clings to its Puritan roots when if comes to sexual expression of any ilk. In France sex has always been accepted as a normal part of life and personality. Emilie was lucky to have a husband who accepted both her extramarital affairs and her academic activities, but of the two, it was the math and science that was remarkable, not the sex.

Larry: Watching the play was a little like watching a cuckoo clock. Each segment of the story went along in normal theatrical fashion with dialogue, and then as a new scene was about to begin, a little bit of dance and slapstick would break the serious mood and deliver a visual summary of one of the points that Emilie was making, the actors darting on and off stage like some ancient clock on a Bavarian wall. There is only one way to describe these changes of pace, delicious.

Gail: Gunderson’s conceit is that Emilie is dead and returns to us, to this theatre, to “defend her life.” Here she is not costumed like the other actors, who are resplendent in their 18th century pannieres and periwigs, nor can she physically touch them. But she can relate to the intellectually, and a surrogate is appointed to be “Emilie” in scenes requiring physical contact. On the occasions when she does touch “the living,” light and sound effects enhance the disruption this act clearly causes in the time/space continuum. There is no attempt to tell Emilie‘s story realistically, we are watching one woman grapple with the meaning, if any, for her own existence.

Von Haubrich’s set also does a nice job of creating a wispy limbo world in which Emilie moves as her story unfolds. Three parallel panels of gauze curtain section off both time and space to carve the St. Germain Stage into distinct playing areas. Both the walls and the floor are chalkboard and can be written on and erased, and Brad Berridge’s projections also allow writing to appear on the curtains as well. There is a neat trick to the bookcases draw on the chalkboard that I loved, watch for both Voltaire and Emilie to utilize this deft bit of stage magic.

Larry: Kim Stauffer’s Emilie was astonishing not only for the clarity of her depiction, but for also being able to convey her innate and most appealing sexuality. Her personal battle was to decide which was stronger, love or philosophy, and she kept score on one of the stage’s blackboards. As her affair with Voltaire, and later the soldier-poet waxed and waned, her thinking was taken over by both, sometimes at the same time. The dense complexity of the script requires a lot of the audience to keep up with the shifting balance, and the reasons for them.

Gail: Stauffer is stunningly beautiful in a seemingly effortless and artless manner. Of course she’s wearing make-up, but the overall look that van Ginhoven and Lohbauer have created for her is simplicity itself. Stauffer is the very definition of womanliness without any of the artifice society layers on in the name of beauty, then and now.

Larry: The St. Germain stage was the perfect venue for this play with its delightful intellectual challenges, and especially what was, in essence, a battle between the Marquise Émilie du Châtelet and the great Voltaire. There is a battle of the sexes from the Enlightenment period that echoes down history to this day. Emilie’s F-mv² was right on target, leading to Einstein’s E=mc² several centuries later. Emilie’s was about kinetic energy and Einstein’s about atomic energy. Earlier you mentioned her translation of Newton’s Principia Mathematica into French and it we learn in the play that this is the one that is considered the best ever done, even today.

Gail: Gunderson establishes right at the start that this is NOT Voltaire’s story. This is the story of a woman as herself, not as defined by her relationships with men. Not that Emilie is free of that necessity – had she not been nobly born, married well, and married to a man who allowed her to be independent on his dime she could not have done what she did.

Her closest analogous contemporary would be Hillary Clinton, an intelligent, well-educated woman who could never have risen to the national prominence she has today if the man she married hadn’t become the President of the United States. Both women combined their natural talents with the entré into the patriarchal power structure afforded them by both birth and sexual liaison, and made the most of their opportunities.

I thoroughly enjoyed Oliver Wadsworth as Voltaire, an historical figure about whom I know shockingly little. Here we see him as we usually see women portrayed, solely in his relationship to Emilie. Wadsworth is not the picture of masculine pulchritude, and he is costumed and wigged to emphasize his physical imperfections as compared to the glorious Stauffer, but he engaged me emotionally and I truly believed in the loyal and loving relationship between the two characters.

Larry: Emilie is a fascinating play for those whose interests go deeper than the fluff so often served up today. For characters who have depth, feeling and intelligence, there’s no better evening of theatre that I can think of . What about you?

Gail: WAM has a dual mission to produce top-notch theatre, using the talents of female artists whereever possible, and supporting the work of agencies at home and abroad which work with women and girls. This production both will certainly empower and enrich the women and girls – and men and boys – lucky enough to see it, and 25% of the proceeds will go to the Rite of Passage and Empowerment Program for Girls, founded by Pittsfield community leader Shirley Edgerton. So no, there is no better theatre to be found because it both gives to you and allows you to give back to the community.