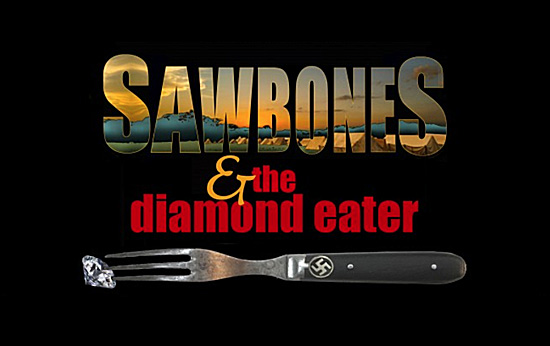 Sawbones and The Diamond Eaters pull away the romantic veil of war
Theatre Review by Milo Jordan, New York correspondent

When a war is fought, the emphasis is often put upon what was won; what the war accomplished that was positive. For morale purposes, the losses and sacrifices are usually glossed over unless a particularly heroic death can be used to demonstrate those qualities admirable in a soldier. Sometimes the failure to save a life is because of medical inadequacy. At others, the life at stake is counted as inconsequential or unworthy of being saved. The casualties of war are blamed on the enemy rather than our own shortcomings.

In two new plays by Carrie Robbins, Sawbones and The Diamond Eater, what has been won is put aside for what those victories cost, both to the individual and in the larger scheme of things.

Robbins is an accomplished costume designer and indeed there are beautiful period costumes populating both pieces, not a hair or thread out of context. Ms. Robbins has put the same care and considerations into the stories being told as the costumes, and both Sawbones and The Diamond Eater complement each other admirably as they consider the human cost of war.

In Sawbones golden wheat and blue skies welcome the audience to a beautiful and touching tale set in a Union Field Hospital in 1862 during the Civil War. Setting the scene from the first is an original, haunting melody played by a most appropriate instrumentalist – celebrated Saw player Natalia Paruz. The story is told first through the eyes of Jebediah E. Wall, a freeman and medic during the war (played by the jovial and engaging Gregory Marlowe) then by Miz Cora (Erika Rolfsrud), the proprietrix of an aging war doctor’s favorite saloon. A young man is shot in the leg three weeks after signing up for the Confederate army and found by union recovery medic Jebediah E. Wall. His arrival in to the union hospital is hotly contested by the Sergeant Rupert McElwain (Alexander Salamat). The doctor-on-call shuts down McElwain’s protests that they do not owe a ‘Johnny Reb’ any medical treatment. The counter argument is that he is merely a boy, and that it is their responsibility to save as many lives as they can.

The good Dr. Cordell Cutteridge (Wynn Harmon) and Jebediah – who steps in to assist when no one else is available or willing to assist a surgery on a confederate soldier – are ultimately unable to save the boy when gangrene sets in to the amputated limb, and they discuss whether or not it is God’s plan that they might save a man by cutting off a limb.

Once the war is over Dr. Cuttaridge migrates to a small town out west called Black Gulch where he serves as the town’s doctor and attempts to live out his life. There he meets the acquaintance of Miz Cora. He remains close to her until his death at the hands of a disgruntled amputee whose life he had saved (but whose leg he had took) during the war. Miz Cora takes center, right, and left stage as she recounts letters of thankfulness from the doctor’s patients. A letter from Jebediah carries the news that he is now studying medicine in Edinburgh, thanks to Dr. Cuttaridge’s insistence that he had a knack for the trade.

The performances by Gregory Marlowe and Erika Rolfsrud are nothing short of excellent. They embody characters often neglected by the tales of the Civil War and turn them into truly memorable, real people. Throughout each touching memoir the audience is brought to consider the difference one man can make, and sometimes, that a life cannot be saved, that there is nothing to be done except to try to carry on after the loss..

In contrast to the homely and warm storytelling of Sawbones, a cold harsh reality sets in after the intermission as The Diamond Eater takes over the stage. Set in a concentration camp at the end of World War II the bleak specter of death hovers over the protagonists. Where the set of Sawbones features picturesque rows of wheat against the backdrop of an endless blue horizon The Diamond Eater set is stark, clinical, cold, and foreboding. We are led into the camp by an elderly Jewish doctor named Dr. Kutterman (Timothy Roselle), kept alive for the sole purpose of treating German soldiers who fall ill.

Fashioning himself something of a medical expert himself, the squad leader of this camp Oberschaarfuhrer Dietz (Tony Naumovski) believes that you cannot take the organs of someone from an inferior race and grow them inside the body of a superior race like the Aryans. But he does consider the possibility of taking an organ from a Gypsy and transplanting it into a Jew. Would the Jew survive? He poses the question to the Jewish doctor who is appalled at the notion, yet he reluctantly agrees to the proposal. The alternative is sure death.

But the Squad Leader does not know everything and Kutterman devises a plan to trick Dietz and possibly save at least one life in the horror of a daily rising body count. Avraham Millstein, a jeweler, (played by Eric Kuttner) enters as one of the specimens chosen. He knows his survival is unlikely but still clings to a last hope. He has managed to smuggle in fifteen diamonds to secure his fortune should he ever step foot outside the camps again. Given the play’s title, you may be able to guess how he has bypassed the ruthless searches the Germans performed on any meager belongings the Jews have brought with them.

During the procedure Dr. Kuttermann discovers Millstein’s secret. Only a handful of the fifteen diamonds have survived the dysentery that has plagued Millstein’s efforts to keep his diamonds safe within his body. Removing the diamonds from Millstein’s bowels, he then sews them into a flap of skin to keep them safe and make their future removal far more simple. The catch is that Millstein has to survive until the Americans liberate the camp, at that point just a hopeful rumor, but a glimmer of hope nonetheless.

Everything about The Diamond Eater is a spectacular showcase of storytelling, both in the writing and the execution of it. The poignancy of each individual situation is mixed fluidly with the harsh reality of an incredibly dark period in time. Millions lost their lives. The performances all feel natural and profound. Fleshing out the tale with stellar performances are Roselle, Kuttner, Naumovski, Wynn Harmon (who plays Dr. Kuttermann’s ailing anesthesiologist Dr. Polsky) and the supporting actors. Complementing the poignant and well-crafted play by Robbins and her cast is the crew who pull the story together to create a truly superb performance. Each detail of the set, lighting, and musical score is designed to underscore but not overpower the stories being told.

Sawbones and The Diamond Eater provide remarkable contrasts and differing ideas about the less discussed sides of war. There is a terrible cost to the individuals who fight and die in them. In human terms, this pairing gives us two knockouts in one evening. Ms. Robbins shows us how intelligent historical writing can evoke emotional responses while not romanticizing the history. Yet every detail of this production brings us into the two moments in history, from the spot on costumes to the sets and music. In the end the plays combine to form two distinct cohesive units, with one message. War is Hell.