“The Other Place” a riveting 90 minutes of suspenseful theatre 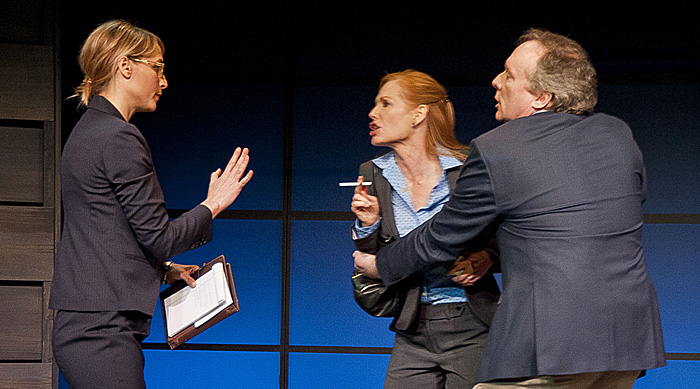 “The Other Place” a riveting 90 minutes of suspenseful theatre

Marg Helgenberger takes us to The Other Place at Barrington Stage Company
Theatre Review by Gail M. Burns and Larry Murray

Gail M. Burns: The Other Place is a riveting 90 minutes of suspenseful theatre, a challenging mystery play in which we try to piece together just what is happening to eminent scientist Juliana Smithton (Marg Helgenberger), and why.

Larry Murray: As we watch the play unfold our minds race to comprehend what’s gong on. Not until the final monologue do we really come to grips with that, and the last ten minutes were so forceful that our expectations completely shift. When I left the theatre, I felt like the world had changed.

Gail: Like a treasure map, the program for The Other Place – which opens the 20th Season of Barrington Stage – Director Christopher Innvar provides the key to open this puzzle box when he quotes the playwright, Sharr White:

“A particular feature of the very smart people in my life is that they think their sheer intelligence can keep them from all manner of harm. It’s a beautiful, yet very vulnerable form of arrogance…[Juliana] is by any measure one of the smartest people on earth: witty, sharp, sexy, aggressive and self-assured. And yet because so much of herself hinges on her estimation of her great mind, she also exists in a terrible state of vulnerability. Take her mind away – even a little bit of it – and what does she have left?”

This is also a play about loss and how we cope with it. Innvar states in his Director’s Note that he perceives this an ensemble piece about family: “What happens when one member is set adrift, lost at sea? Only by admitting that we are lost can we be found, and with luck, discover the pieces of ourselves that we thought were lost forever, and arrive safely home.”

Larry: In many ways, the stars were aligned to give us this play in the Berkshires. The first play of every season seems to give us food for thought.

Gail: The Other Place (2010) CLOSED in New York just a year ago, after successful and award-winning runs off and on Broadway. Julianne Boyd must have pounced quickly on the regional rights and not just because this is a brilliant piece of writing by a playwright on the rise, but also because it presents such an exciting challenge for the 50-something actress in the central role. There was no doubt BSC would be able to attract a star with name recognition for the role.

Larry: And they did! The remarkable Marg Helgenberger plays the lead, she is on stage every minute from start to finish which makes her performance a marathon. As she plays the self-confident and successful scientist now touting a new wonder drug that was created from her research, she begins to unravel. She has what she calls “an episode” during her talk to medical colleagues at a conference on St. Thomas. All of a sudden she sees and fixates on a girl in a yellow string bikini in the audience. (There is lovely water imagery throughout the play, listen for it.)

Gail: This is her first major clue that something is wrong, and she assumes that it is brain cancer, a “safe” assumption for her since her husband, Ian (Brent Langdon), is one of the top oncologists in Boston. But no tumors are found. Instead, Ian arranges for her to see his colleague, Dr. Cindy Teller (Katya Campbell), a neurobiologist.

Larry: Those of us who share Juliana’s fragile arrogance of intelligence, are often the last to know what is happening to us. She knows something is not quite right about her but then goes into denial, others see it as a bit of paranoia, or an obsession.

Gail: Because White tells much of the tale through Juliana’s eyes at the start of the play, we understand how real she perceives her experiences to be, unaware or unable to accept that what we call “reality” is only one mode in which our brains function.

Larry: As the play unfolds, Juliana changes from a smart, strong woman I admired into a contentious. confused and self-absorbed antagonist. As the story rushed to its conclusion she melted and became as vulnerable a human being as anyone has ever met. Helgenberger accomplishes these changes with a restrained technical finesse that film and television actors have such mastery of. Of course, bigger can be better in theatre. A little more acidic dismissiveness would have sharpened her exchanges with her shrink and the beginnings of panic would make her more human in the scene where she was trying to find her wedding ring. Juliana almost always had everything under control, and was hard to warm up to, but perhaps that was the playwright’s intent. Those that rely on their intellect often shortchange their emotional bona fides.

Gail: I was reminded of the book My Stroke of Insight, by neuroanatomist Jill Bolte Taylor, which tells the true story of her own encounter, as a scientist, with the less well documented abilities of the brain. And The Spiral Staircase, the autobiography of theologian Karen Armstrong, which details how she came to realize through her experience with undiagnosed epilepsy that religious ecstasy is highly dependent on brain chemistry. Juliana is less open to the concept of their being other places within her brain and that inner conflict drives the plot.

Larry: The flashbacks, earlier medical talk, and memories are made visible through lighting (Scott Pinkney), sound (Anthony Mattana) and projections (Brian Prather, who also designed the spare and enigmatic set), and the technical artists have to really be on their toes as the play proceeds. One missed cue would derail the rapidly progressing story and destroy the illusions that accompany it.

Gail: White took some biology classes at a junior college in Southern California and had thoughts of becoming a biologist because his father, who he mentions as an example of a person with the kind of intelligence and the vulnerability that he strove to embody in Juliana, is a biophysicist and physiologist.

Larry: Never before have I witnessed the total loss of someone’s being on stage. With Innvar’s fluid direction, it happens with iron-clad realism, too. That is because the supporting cast – especially Langdon and Campbell – were in perfect orbits around the show’s star. Without them, this drama where protein folding is a major plot point would be hard pressed to become as grippingly human.

Gail: I was impressed also with Campbell’s performance in the three roles she is given – first as Dr. Teller; then as Juliana and Ian’s daughter, Laurel; and finally as the woman who now owns Juliana’s childhood summer home on Cape Cod, referred to in the family as “The Other Place.” The scene late in the play between Juliana and this unnamed and harried homeowner is magnificent in its reality and tenderness.

Langdon does fine work as Ian, getting in his emotional fireworks midway through the narrative when his character nearly cracks under the fear and confusion of dealing with a loved one who is changing into a stranger before his very eyes.

Having grown up with four sisters and only one brother, White creates far more interesting roles for women than for men. The fourth member of the cast, Adam Donshik, is saddled with the thankless task of bringing two poorly developed and barely necessary characters – Juliana’s post-doc research assistant Richard Sillner and a private nurse named Bobby – to life. He does so with grace and humility.

Larry: There’s a meticulous layering of relationships as Juliana comes to grips with her other place, and its a performance that makes the familiar star of film and television a new force on the stage.

Gail: While The Other Place has a happy and hopeful ending, it is a rough ride to get there. This is a strong and often harrowing play about the other places in our life journey we prefer not to think about, let alone go to. But for the dazzling brilliance of the writing, acting, and directing, this is a theatrical journey well worth taking.