Kristen Wold makes a tour-de-force of “Shakespeare’s Will” 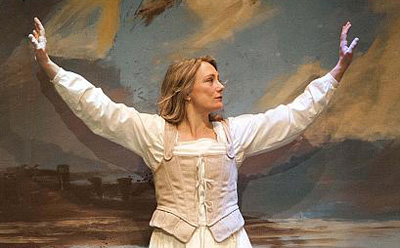 Kristen Wold makes a tour-de-force of “Shakespeare’s Will”

Larry Murray: Shakespeare’s Will has everything going for it except the truth. And the details that would inform us about the life of Shakespeare, and those closest to him, are essentially unknowable. While Kristen Wold who plays Anne Hathaway is absolutely convincing on stage, we saw what was in essence, a gossip play.

Gail M. Burns: We should make it clear that we are discussing Anne Hathaway (1555/56– 6 August 1623) who was married to William Shakespeare, not the Academy Award-winning actress who is alive today. Like most women of her time, we know nothing about her except for what she did through the church and the legal system, and what men she “belonged to.” We know that she was baptized, married, her children were baptized, and she was buried. We know who her father, brothers, and husband were and what property they owned. We know that she and the children lived in Stratford, in Warwickshire, England, while her husband lived for many years in London while he worked in the theatre. At the time of their marriage Shakespeare was 18 and Hathaway was 26 and pregnant.

Larry: As a playwright, one of the things you have going for you when you write about a dead person is the inability of the deceased to come back and challenge your assertions. Far more people claimed to have sex with James Dean and Marilyn Monroe after they died than when they were alive. And I suspect that Shakespeare was far less randy than the playwright Vern Thiessen has worked into his play, Shakespeare’s Will.

Gail: Or more so. Mores where very different back then, and it would be interesting to learn more about how married but separate couples like Hathaway and Shakespeare were expected to comport themselves.

I think the thing that bothered me the most about Vern Thiessen’s script is the complete lack of effort to make it historically accurate and informative. Yes, Anne Hathaway was in many respects an Elizabethan Everywoman, and her experiences of love, lust, pregnancy, childbirth, motherhood, joy, jealousy, anger, frustration, etc. are universal and undoubtedly have not changed one whit in the intervening centuries, but how she perceived those emotions, and how her actions were perceived by society at large would have been very different.

Also, Vern Thiessen plays fast and loose with several indisputable facts. Hathaway’s father was a farmer, not a sailor, and he died the year before she became pregnant and married. Her son, Hamnet, didn’t drown. He most likely died of the Bubonic Plague, which was ravaging Stratford during the year of his death. It is one thing to imagine what we don’t know, but it is another to muddle the few facts we do.

Larry: There is another side to this authenticity issue and, and that is despite the debate we could have over the truth of Thiessen’s Anne Hathaway, the playwright, to borrow your phrase, hath a way with glorious theatricality. Together with the director Daniela Varon, they have created an evening on stage that propels Kristen Wold into the most challenging role I have ever seen her undertake. Her performance is sometimes soft and subtle as when she yearns for a return to the sea. At other moments she is shouting at the top of her voice as she recreates the frustration of her own father. She sings. She dances. She mimes. And Varon has her cover every inch of that stage, moving about like a pinball, careening from bed to desk to chair and back, pausing only to look the audience in the eye and speak the truth that is in her heart. Much of the movement can be credited to Susan Dibble. Taken together, It is Kristen Wold’s tour-de-force.

Gail: Wold has been strong member of the Company for the past 25 years, which is hard to believe since she looks about 35. I have enjoyed her in a variety of roles over the years and it was high time she was given a crack at a solo show. I am just sorry that her talents and Varon’s are wasted on such a weak script.

Larry: Technically Shakespeare’s Will is a show that demands a lot as well. Between the numerous light and sound cues, it’s a very complicated show. A group that arrived late included someone whose cellphone or mp player was playing classical music similar to the show’s. At first the backstage crew thought it might be something in their system, and the show was stopped briefly. While investigating the cause it stopped.The owner figured out it was them, and turned it off. The show resumed.

Gail: Never had something like that happen before, their audiences are very attentive. And they always have the highest production standards.

What was less than ideal was the awkwardness of one of Govane Lohbauer’s costume pieces. At one moment a piece intended to ensure Wold’s modesty rode up higher than it should during the removal of an upper layer. She made a swift adjustment, but a performer should never be sent out on stage in fear of wardrobe malfunctions. Wold has plenty to worry about without that!

Larry: Yes, it was a close call on that wardrobe snag, but it also made me realize that beyond Wold’s delivery of words and billiard-ball staging, she also was coordinating all of her own costume changes to go with each period of her life that was portrayed. And the deceptively simple set by Patrick Brennan was subtle and delicate, yet capable of surprise.

Gail: I enjoyed some of the set surprises, but overall the endless tweaks of set, costume, and props and the constant motion and emotion Varon has required of Wold felt like too much to me.

Larry: Clearly a great deal of love and hard work has been poured into Shakespeare’s Will but in the end what do we come away with?

Gail: Fine work by a talented actress, director and technical team wasted on a play barely worth producing. Worth seeing for Wold’s performance, but certainly not a valid portrait of the real Mrs. William Shakespeare.