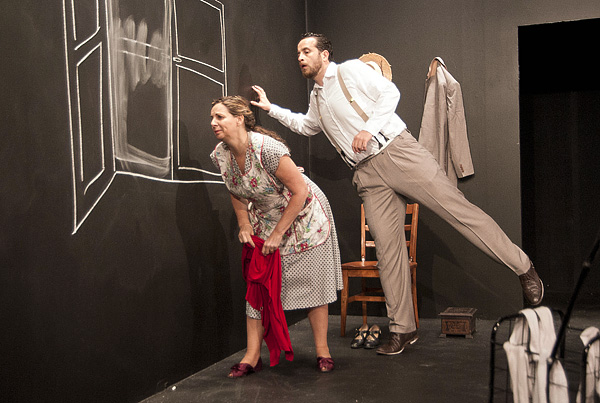 Larry Murray: Take away the claustrophobic sets and piles of clutter that mark the film that Working on a Special Day is based on, and lurking in its core is a remarkable story well suited for the stage. I’m trying to think of a word that sums up the essence of this very unusual 74 minute play that has both charm and substance.

Gail M. Burns: It is achingly simple, both in style and story. It gets at the very root of human need – for companionship, affection, and physical intimacy.

Larry: Exactly, and The Play Company and Por Piedad Teatro have wrought a perfect distillation of the overwrought 1977 Italian film Una giornata particolare which was directed by Ettore Scola and starred Sophia Loren and Marcello Mastroianni. It captures the essence of two human beings whose lives are suffocating although in completely different ways. From the first moments, with the house lights still on, it begins in a deceptively simple and creative way.

Gail: The actor/director/translators – Antonio Vega and Ana Graham – started the show in their street clothes, sharing the welcoming speech with BSC Artistic Director Julianne Boyd, and then chatting with the audience as they changed into their costumes and prepared the stage. This is a rare time when Barrington Stage has “imported” a production on to their stage, in this case literally. Por Piedad Teatro is based in Mexico City and has as its mission: “…to promote the dialogue between two cultures – Mexican and American – so close to one another and yet so different, through cutting edge contemporary theater.” Previously the company’s only American performances have been in New York City, so it is exciting to have this production join the international offerings of the Berkshire Fringe in downtown Pittsfield this summer.

Larry: Recently play cancellations have been in the news due to directors changing scripts without permission. For Working on a Special Day the owners of the film rights gave permission to make this play with the condition that not one word was to be changed from the film, and as the evening unfolded, it was clear to me that they lived up to the bargain. In the opening moments, when Antonietta (Graham) wakes her six children and husband, the hub-bub of a large Italian family living in cramped quarters is simply perfect. The two actors provide all the voices, sound effects and the show’s sound designer adds the street noises as Hitler arrives in town during the early part of WWII.

Gail: I loved the sound design, most of it, as you say, generated by the actors themselves. Sometimes they did it so surreptitiously that you couldn’t immediately identify the source of the sound, and other times they used their body language to exaggerate the jarring effect of a ringing phone or doorbell.

Larry: Graham and Vega worked on the English translation from the Italian film with Danya Taymor and are the directors as well. The flats are painted grey and except for a couple of chairs and tables as props, the audience is asked to not only suspend disbelief but to use their imagination to create the world in which they exist. That world is a total exercise in theatrical imagination supplemented by a couple of pieces of chalk and an eraser. The photos show how little they had to work with. And they act as their own stage manager – didn’t you see some silent cues as each scene began?

Gail: From the soft start of the show you see these two signaling their readiness, or lack thereof, through subtle but silent cues. Theatre is a team sport, but the audience isn’t always privy to the teamwork. Here we see the actors hug each other in support and solidarity before and after the show. But the time I clearly noticed their on stage communication was after the most emotional and physical scene of the play. They effectively debriefed through eye contact and discreet hand signals to allow each other time and space to breathe, wipe away tears and sweat, and compose themselves emotionally and physically to move on to a less strenuous scene. Fascinating to see.

Larry: To me the most interesting thing about both the movie and play is that the two leads are the opposite of a romantic couple. Graham’s Antonietta is as frumpy and ragged as an overworked housewife can be with little appreciation from a demanding brute of a husband, while Vega’s Gabriele finds himself a gay man in Fascist Italy on the day that Hitler comes to town to rally the troops. His fate – a concentration camp, possibly death – is staring us in the face as the hours count down to his incarceration. In those unlikely circumstances, compassion, if not love, surfaces in a moment that is more human than tragic.

Gail: Unlike you I have not seen the film, and I confess a shameful ignorance of life in Fascist Italy, but the dialogue of the play hinted at aspects to life in that time and place that prompted me to do some simple research. Mussolini launched four economic “battles” at home – the Battle for Grain, the Battle for the Lira, the Battle for Land, and the Battle for Births. This last initiative, launched in 1927, offered loans to married couples, with part of the loan canceled for each new child, and any married man who had more than six children was made exempt from taxation. Bachelors were taxed increasingly, and by the late 1930s, the civil service began recruiting and promoting only men who were fertile and married, while women were increasingly prohibited from working outside the home at all. These policies extended to private industry as well, with the majority of companies reserving promotions for married men.

Antonietta, a very loyal Fascist, proudly announces that she has provided her husband with six children and is hoping for a seventh to reach the tax exemption. Conversely, Gabriele has lost his job as a radio announcer and has had to pay the bachelor tax. It is easy to see how this policy encouraged discrimination against gays and lesbians. As a police prefect in the Sicilian city of Catania, determined to halt the “spreading of degeneration” in his city wrote at the time: “…such a sexual aberration offends morality and is disastrous to public health and the improvement of the race. This evil needs to be attacked and burned at its core.”

Larry: It is amazing how successful fascist regiemes can be at getting the public to go along with wholesale discrimination and even death using taxes and talk of patriotism as their hammers. Antoinetta was just as trapped as Gabriele.

Gail: Antonietta and Gabriele know that they are being watched. Why does she have a strange single man in her house while her husband and children are off at the rally? Why is he single and unemployed? He knows “they” are coming for him soon, very soon… They both are so alone. Their time together makes this a “special day” in a private way that goes far beyond the political puppet show being carried out in public.

Larry: The play’s raison d’être is as simple as its production, that we must never be afraid to reach out and trust our hearts, that no matter how mad the world around us, we are all living life the best way we know how. Even in our isolation, we can find love from another in the most unexpected places.

Gail: This is not a play about love, or sex, but about the very deep need we all share to connect, to be heard, to be held, to be valued and enjoyed, to laugh together. This production is delightful and moving in its simplicity as it reaches across time, language, and cultures to touch our hearts. Vega reminded the audience at the curtain call how lucky we, and they, were to be able to share this time and this story together. Lucky indeed!

Note: While this play touches on Il Duce’s efforts to eradicate homosexuals is a core element of this play, most of us are unaware how just how homophobic Italy was, and still is.