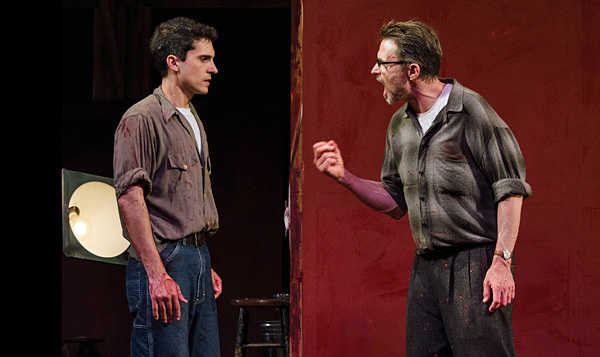 A splash of “Red” with Tim Daly at Dorset Theatre Festival
Theatre review by Gail M. Burns and Larry Murray

Gail M. Burns: As the lights come up on Red at the Dorset Theatre Festival, Mark Rothko (Tim Daly) is staring intently through the fourth wall looking, not at the audience, but rather at some imaginary painting he has just finished, and asks: “What do you see?”

Larry Murray: For me, those words signify the beginning of a wonderful excursion into the mind of the artist, as imagined by playwright John Logan. As we take our seats that incredibly detailed set by John McDermott and the classical music playing in the background told me a lot about Rothko and his life as an artist.

Gail: It is a marvelous set, very realistic. I love creative spaces, they tell a lot about the artist, which is exactly what McDermott and director Adrienne Campbell-Holt intend. There are existing photos of Rothko in his studio at about this time – the play is set in 1958-1959 when Rothko was at the verge of waning as an artist – which show a less cluttered space with more natural light than either this set or Logan’s script describe, but they also show how enormous Rothko’s canvases are. Everything had to be scaled down to fit on the Dorset stage.

Larry: In many ways this was an expedition into the mind of an artist, a trip stimulated by Logan’s visit to the Tate in London during a film shoot where the Rothko Seagram paintings were. Created for the Four Seasons Restaurant, the writer was smitten by them and they in turn prompted him to write the play. “I thought about the way the colors in the paintings vibrate back and forth,” he said, deciding “it would be a great two-hander because it sorta represents and mirrors his work. Once I came up with the idea of Rothko and his assistant, everything fell in place.” And as theatre it works as the device to get us to learn about his art. Tim Daly as Rothko and Charles Socarides as Ken are able to answer that question, not once, but again and again.

Gail: The major drawback to Logan’s script is its wordiness. Rothko talks endlessly about how he paints, why he paints, what he thinks about his paintings, what other people think about his paintings, what he thinks about other artists, how 20th century art is evolving…and the character of Ken is really there just to give him an excuse to talk, although ironically we learn much more about Ken’s back story than about Rothko’s.

Larry: The only real action on stage takes place when Rothko and Ken apply the base paint to a large canvas.

Gail: The challenge for the actors and director are to bring human interest to the script, to make it a play and not just a TED Talk about abstract expressionism. The team at Dorset does a good job at this, and the matinee audience we attended with seemed genuinely open to the dense and esoteric dialogue.

Larry: In the play Rothko encourages his employee to get close to the painting, to let the colors fill his field of vision, and once immersed in its color field, to allow it to overtake the mind until you are almost drowning in it. He painted in vivid colors like red, and in blacks, and yet other colors lie in wait under his surfaces or peeking out from under an edge. Have you ever experienced that in a painting, looking at it not for a few seconds or minutes but for a good long time, and finding layer after layer of meaning? It is hard to imagine an abstract painting doing that, but it happens. Online versions of paintings don’t have the same effect, you have to go one on one with them. I have seen several Rothko’s over the years and what eventually catches your eye is the brush strokes, and the little rivulets of paint which are pulled toward the floor, sometimes revealing the subtle colors underneath. A seemingly black painting has shades of colors under the black, similar to the way a scrim hides 99% of the detail going on behind it. And all the while we are learning about the artist as a person. As a character, what did you see?

Gail: As theatre critics we are in the business of asking ourselves exactly this question with every show, and the beauty of this dialogue approach we have developed is that we can offer two angles on every experience. But the difference is that visual art (with the exception of kinetic art) and film are always the same, it is the viewer’s response that changes. Performing arts are alive, ever-changing, and ephemeral. So yes, you can look at a painting and see it in endless different variations as the light, your viewpoint, and your intellectual and emotional aspect change, but the painting itself never changes.

In the end it all boils down to that story I told you about the young mother presented with a piece of artwork by her 4-year-old son. “Its beautiful, honey. What is it?” she asked. “Its paint, mommy,” he replied.

Larry: Rothko (1903-1970) only lived to be 66, and his Four Seasons commission came in 1958 when he was about 55. I don’t think Daly looked that age, and since he was plagued with illness and depression in has last years, that is hinted at in the second half of the play. Socarides as Ken gets ever more self-assured in his opinions, while Daley’s Rothko seems to slow down, having second thoughts about some of the things his assistant brings up. It’s a subtle shift, and Campbell-Holt clearly guides the duo into this territory in a subtle and convincing manner. Though the play ends well before Rothko’s suicide, the harbingers are there.

Gail: He doesn’t look it, but the handsome and boyish Tim Daly is 58! But my problem with Daly in this role was that he didn’t present Rothko as the impressive force of nature Logan obviously intended. I listened to an excellent WAMC Round Table interview with Daly about this production and he spoke of the obvious differences between himself and his friend Alfred Molina who originated this role in London and New York. Molina actually bore some physical resemblances to Rothko, which Daly does not. And, although I have seen Daly play some chilling bad guys, the aforementioned handsome boyishness makes him look like the good guy. Logan intends Rothko to be an intellectual bully to Ken, and I didn’t get that from Daly.

But he and Socarides make a good team and I enjoyed them together more than I enjoyed Daly’s portrayal of Rothko alone. Ken is a thoroughly fictional character, and is therefore more interesting. With Rothko Logan had to stick to the facts. With Ken he could ask questions and explore. Socarides did a fine job of keeping Ken both subservient and sympathetic.

Larry: Wiki claims he secretly resolved to create “something that will ruin the appetite of every son-of-a-bitch who ever eats in that room.” Observing the restaurant’s pretentious atmosphere upon his return from a trip to Europe, Rothko abandoned the project altogether, returned his advance and kept the paintings for himself. The play’s retelling of this makes me think that it was the trip to the Four Seasons that convinced Rothko to not only abandon the project but to also lose faith in people.

At the Four Seasons, I believe some Jackson Pollacks were on the walls while they waited for Rothko’s works to be finished. The diners depressed Rothko, instead of searching for meaning in the art on the walls, people were simply chomping on food and making inane chitchat. They never bothered to see what he called the “inner light” of the artwork that was present.

And it led him to despise most collectors of art.

Gail: The relationship between artist and audience is always fraught with tension. The artist wants his work to be seen, it must be seen to be valued and validated, but he agonizes over the reactions of his public. We meet this all the time as critics. We are suspect. We cause artists pain, whether that is our intention or not. We have been called “rats in the theatre.” Yet the only difference between us and the rest of the audience is that we openly reveal our opinions. At the Four Seasons Rothko abhorred the fact that the audience might literally not even notice his art and therefore have no opinion at all. Which is the more painful – the critical response, which can be had for the asking, or the lack of attention?

Larry: Back in 1943 Rothko published a manifesto in the New York Times in which he said: “”Art is an adventure into an unknown world, which can be explored only by those willing to take risks” The same could be said about this play, which is not an easy one to see, its subject is complex, the characters hard to warm up to. But it is a great workout for those who have a knack for observing detail and thinking deeply. “What do you see” has as many answers as there are people. Did we see the same things in this play or did I focus on one aspect while your observations went in another direction?

Gail: While our responses as professional critics to the play were similar, I would bet that our personal, emotional responses were very different. I was intrigued by the exploration of our emotional response to color. You have mentioned your experience of color as you viewed Rothko’s paintings in person. I was pondering color, and particularly the color red, which literally saturates the stage, the clothing, and the skin of the performers. Red is a very powerful color. The color of blood and therefore the color of both life and death, and yet Logan speaks of black and white as the death colors…

What it boils down to is that this is a thinking person’s show and not your average summer theatre offering. If you are looking for fun fluff just wait a few weeks and Dorset will be serving up some David Ives and Agatha Christie. Red is ninety minutes of intellectual exploration of the relationships between the artist and his work, his audience, his place in history, and his inner self.