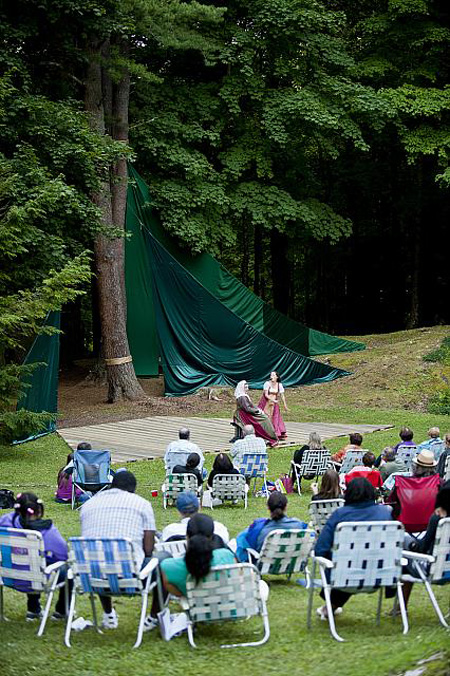 Shakespeare & Company’s Romeo and Juliet in the Dell at The Mount
Theatre Review by Gail M. Burns

Nostalgia sweeps over me as I sit in The Dell, one of many sylvan glades on the campus of The Mount, and watch six actors present a lively and stirring pared down version of Shakespeare’s Romeo and Juliet. This is how it all began for Shakespeare and Company ñ young and eager performers using the natural beauty of the Berkshires as the back drop for innovative productions of the Bard ñ and those of us with enough Berkshire Blood in our veins remember it well. Now a new generation has an opportunity to watch Shakespeare at The Mount, and I for one am delighted.

This is the second year the Company’s non-union Northeast Regional Tour production has made The Dell at The Mount its final stop, after performing at approximately 60 schools this past winter and spring. This is a bare-Bard style production using a system the Company devised over three decades ago, which typically features 6-13 actors playing multiple roles in a pared-down, incisive and fast paced production with minimal sets and costume elements. The fast pace is well-suited to school schedules and to capturing wandering young minds. As Tina Packer herself said of her similarly shortened production of Julius Caesar (currently running at the Bernstein Theatre): “You are always in the ëmoney shot. There are no boring bits.” (Review)

Romeo and Juliet is not a tedious show to begin with as the impossibly young lovers dash from first kiss to their untimely deaths in less than a week. Jonathan Croy’s direction focuses on the passion, the humor, and the fights. Just changing costumes and characters keeps this cast in constant motion. There is no time to be bored!

Croy, a Company member for 28 years, is one of their most talented actors, directors, and educators who can be relied upon to produce exciting, hilarious, and/or moving productions and performances. If his name is on the program, you want to buy a ticket!

Many of the young cast, four men and two women, have come up through the Company’s education program and are now paying it back to the next generation, as well as providing an excellent advertisement for the training they have received. All play multiple roles, many crossing age and gender barrier, and all are excellent. Mary Readinger’s simple and flexible costumes, Croy’s concise direction, and the acting ability of the cast keep characters straight and the plot moving forward. I am not going to single the actors out for individual praise because this is a true ensemble – a team sport, if you will – and that is to be applauded along with each player’s individual efforts.

Every time you attend a performance of a Shakespeare play new words, ideas, moments come forth to greet you. This time I heard Friar Laurence’s line to Romeo in Act III, scene iii:

A pack of blessings lights up upon thy back;
Happiness courts thee in her best array;
But, like a misbehaved and sullen wench,
Thou pout’st upon thy fortune and thy love:
Take heed, take heed, for such die miserable.

Of course if the star-crossed lovers would only take heed of Friar Laurence’s words, if they would only stop, think, wait, and not rush headlong and passionately ahead their fate would be very different. But they will not, cannot. They are too young and so they cannot see the pack of blessings with which they are, and could be surrounded. This foreshortened version of the script brings those truths tragically into sharp focus.

Croy and his cast really give their all to the fight scenes, which are fast-paced and terrifyingly realistic. They are guaranteed to either captivate or terrify the youngest theatre-goers, I saw evidence of both reactions at the performance I attended.

The set consists of a wooden stage in front of three impressive pine trees, from which enormous green fabric sails are strung between the tree trunks and the ground. Juliet’s balcony is a little fence set atop and natural hillock adjacent to the trees. The natural forest forms the backdrop, and actors often race about the ample sloping lawn on which the audience sits.

The Dell performance space is just behind The Stables at The Mount, which means it is close to the parking area and the entrance to the property off of Rt. 7, but there were only muffled rumbles to announce the passing of a tractor-trailer, and even the cheerful chatter of visitors walking to and from the mansion itself (paths pass on either side of The Dell) was softened by the vegetation. The actors, with the exception of Calkins, are all loud enough to be heard throughout the woods. There is an evocative soundscape and score, composed by Reed, which I believe is recorded, but its is possible that some of the drumming is performed live.

Performances are scheduled at 12:30 and 6 pm so natural light is used and picnicking is encouraged. There are folding chairs available, but it is recommended that you bring your own. Rain does cancel the show, so keep an eye on the weather forecast!