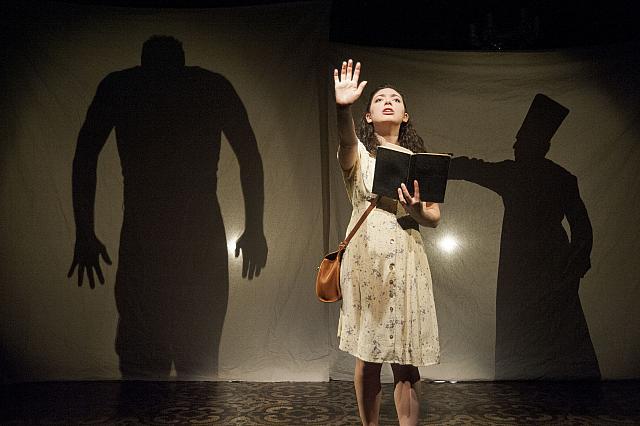 The Golem of Havana is a timeless story of family unity
Theatre review by Gail M. Burns and Larry Murray

Larry Murray: The creators of The Golem of Havana deserve to light up some nice big Cuban cigars, because they have a lot to celebrate following the world premiere of their smash new musical. And those associated with William Finn’s Musical Theatre Lab should be popping some champagne corks over at Barrington Stage right about now. They have told a complex story exceptionally well.

This tale of a Hungarian-Jewish family living in Batista’s 1950’s Cuba conflates history with a legendary protective golem. The combination sets up all the drama one could ask for in a musical, a story replete with good fortune and deadly reversals as Fidel Castro brings revolution to the Frankel family. To dramatize the story, the company uses everyday realism mixed with nighmarish surrealism; and the memories of a bright and imaginative young girl mixed with the mysticism of Jewish and Santeria traditions.

Gail M. Burns: This is an original story, based on the composer and lyricist’s personal experiences in Venezuela. The American media keeps us so very ignorant of events on the whole South American continent that the creative team was wise to move the story to Ricky Ricardo’s pre-Castro Cuba, not only for us Ugly Americans but also, as I understand, for their own political safety as artists.

Larry: What I most liked about The Golem of Havana is the music itself, and when it is brought to life in songs that move the plot along it has me singing its praises. Much of it is delivered in snippets, as when first Laszlo and later Yutka sings; “I had no choice, I bear no blame, I had my family, You’d do the same” Or when Teo laments “Rich Men’s Sons, Poor Men’s Sons.” Written by Salomon Lerner, the music is a colorful tapestry of sounds, often distinctly Cuban and Caribbean, and at others clearly Jewish with Klezmer influences. The scene dictates the style. It is at its best when the two meet, sort of in the middle, and the songs become a blend of the two cultures. Lyricist Len Schiff wastes no time in finding words to the winsome melodies that either express the characters feelings, or advance the plot, sometimes both at the same time.

Gail: The music is lively, melodic, and beautiful. And eminently danceable. Choreographer Marcos Santana blends the dancing seamlessly into the characters’ movement. He is likely also responsible for the striking shadow work that opens the shows and which helps anchor the ancient tale of Rabbi Loeb and the Golem of Prague in its time and place.

Larry: Julie Benko plays the 14 year old Rebecca Frankel, an incredibly important role since she is the key to the story, both as our narrator and as the artist who has created a golem to protect her extended family. She draws comics, and in them she incorporates the family’s history as she sees it, and often doesn’t understand it. What she draws often ends up giving her nightmares, some of which we see on stage.

She sets up what is to follow by asking: What can you take with you when you can’t take anything with you?

Gail: And she answers her own question saying Only your stories. This is mine. Of course, The Golem of Havana is not just Rebecca’s story. We learn about her parents Yutka (Jacqueline Antaramian) and Pinchas Frankel (Gordon Stanley), Jewish refugees from Hungary; their maid Maria Rondon (Rheaume Crenshaw) and her only child, Teo (Ronald Alexander Peet); and their friend, Arturo Perez (Danny Bolero) who happens to be a ranking member of the military intelligence. Even the real-life figure of El Presidente, Fulgencio Batista (Felipe Gorostiza), figures in the plot.

Pinchas is anxious to realize his father’s dream of opening a tailor shop, but, although he is a gifted tailor, he has little money and even less business sense. Arturo persuades Pinchas to invest in a scheme of his, causing Yutka and Rebecca angst, but the widowed Maria is under real stress knowing that Teo’s life is in danger because he has joined the revolutionary forces under Fidel Castro. Meanwhile Yutka and Rebecca suffer nightmares over the death of Yutka’s only sister, Olga (Gabriel Kadian) at the hands of the Nazi’s .

Rebecca copes by writing and illustrating what we would now call a graphic novel about a golem who saves her family from all their trials, past and present. Still embracing magical thinking Rebecca is also intrigued by Maria’s Santerian deity, Yemaya, who requires the ocean side offering of a watermelon before answering prayers. Those scenes contain some of the most beautiful music and dance sequences of the show.

Larry: For a musical, this has a very focused book, written by Michel Hausmann who is also the director. What is striking about his dialogue is its earthiness. There are no monologues or places where the actors can show off. It’s a script that is strictly business in terms of keeping things moving. The most striking hallmark of his style is the wall-to-wall production itself where everything was cleared from the playing space, and actors pretty much remaining on stage, on the sidelines. Sometimes they made the sound effects, and sometimes it was time for their character to reappear.

Gail: Set Designer Edwin Erminy has pushed the action right to the walls of the St. Germain Stage. The playing space is open, with minimal furnishings carving out and defining interior spaces. Transparent burlap hangings cordon off the very edges of the space, and actors often sit there on chairs or benches watching and providing non-musical sound effects. This is reminiscent of Joe Calarco’s staging of Breaking the Code, currently on the BSC Main Stage, but here the actors do not interact or react with the action center stage.

This is quite an inclusive cast, too. It is a real treat to see a cast the majority of whom are NOT tall, thin, young, and white. People outside those narrow media-proscribed parameters are also attractive and talented, as this production amply proves.

Larry: That realism of the cast also brought a certain honesty to the tale being told, since The Golem of Havana smashes the truth against fantasy to make its point. I also think the diversity, coupled with the clever use of stage shadows and surrealistic scenes mixed with realistic ones, are in many ways the theatre of the future, the way it seems to be evolving.

I asked William Finn if this was the largest production that his Musical Theatre Lab has put together since it began, and he said it was. With 13 in the cast and 6 in the orchestra, I am sure it has put some heavy demands on Barrington Stage to accommodate its budget. The six musicians made a glorious sound under the direction of Jason Yarcho, and the Musical Theatre Apprentices added real depth to the proceedings. We don’t often mention the generous people who provide financial help to allow BSC to do such excellent work as this. So here’s my digital round of applause for Carrie and David Schulman who sponsored the production along with Drs. Judith and Martin Bloomfield & Norma and Sol Kugler. Without them we would never have had the chance to see this Pan-American effort.

Gail: This is such a unique show, truly representing new voices and ideas. And it is the perfect combination of provocative, intelligent theatre and top-notch musical theatre that represents the best of Barrington Stage.

Larry: I might add that tickets for The Golom of Havana are almost gone, with 14 of the upcoming performances completely sold out and only a few tickets left for the other six. They won’t last long. This musical, while about the past, is very much a look at the future of musicals too.