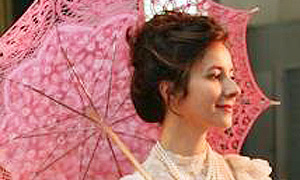 The Bear (of the Berkshires) & The Rembrandt at Pythagoras Theatre Works
Theatre Review by Gail M. Burns

Do not get confused and go, as I initially did, to the building the town of West Stockbridge, MA, currently uses as its town hall. The 1854 Town Hall is located on Main Street directly opposite the Public Market, and parking is abundant, although often cleverly concealed, nearby. Like most assembly halls of the 19th century, the public space is on the second floor above the office or retail space at street level which provided free heat for the upper level, although the thimble for the stovepipe is still visible on the side of the chimney upstairs. The hall features a tiny stage whose enormous windows (yes, there are windows on the back wall of the stage) attest to a time when natural light was necessary for most gatherings and performances.

In this slightly shabby space – the West Stockbridge Historical Society is investing first in modernizing the building and bringing it up to code – the newly formed Pythagoras Theatre Works is mounting their inaugural season featuring a pair of one-act plays – The Bear (of the Berkshires) by Anton Chekhov and The Rembrandt by Edith Wharton – both adapted and staged by Artistic Director Michael Burnet. Do not allow the modest sets, lack of theatrical lighting, or the choice of public domain material to fool you – these are talented, Equity actors who choose to live, and often work, locally. And this is a low-key but auspicious launch for this group, with the newly-revitalized downtown of West Stockbridge as the perfect setting.

As you enter the hall, you are treated to Jonah Thomas playing his original compositions on the cello. The acoustics are excellent and Thomas’ music is evocative of both time and place. (Is there any instrument more Chekhovian than the cello?) Presently Leonard, the butler, (Scott Renzoni) appears to berate his mistress, the widowed Elena Winterbottom (Diane Prusha), for her prolonged and maudlin mourning and self-imposed isolation for her late husband, the philandering Nicholas. It has been seven months since his death, why won’t she leave the house?

Their bickering is interrupted by the forceful entrance of a neighbor, Gregory (Chuck Schwager) to demand immediate payment of a debt Nicholas owed him. Mrs. Winterbottom cannot pay until the day after tomorrow. Gregory refuses to leave her house until he receives the money. Tempers flair. A duel with pistols is proposed. Leonard falls down the stairs. And Chekhov’s trademark dark and deadpan humor runs rampant through the single-minded and self-unaware ramblings of these unwitting fools.

I know there are people who hate Chekhov, but this is one of his short farces (he referred to it as a “stupid vaudeville”) which many will find significantly easier to enjoy than his full-length works. Burnet has set the action in West Stockbridge in 1901 (the original was written in 1888 and set in Chekhov’s native Russia) and added some cheerful local references. Prusha is positively winsome as the clueless widow, Schwager is doggedly deadpan as he endlessly announces, but rarely displays, Gregory’s emotions, and Renzoni provides amusing comic relief as the disobedient manservant.


After a brief intermission Edith Wharton returns to her old stomping grounds in central Berkshire County. The Rembrandt was first published in her 1901 collection of short stories entitled Crucial Instances, and Burnet has kept the setting in New York City in 1900. Thomas (Biggs), a curator at the Metropolitan Museum of Art, lives in terror of his pretty and socially ambitious young niece, Eleanor Copt (Jamie Greenland), who is always using his social and intellectual prestige to hoist herself up the rungs of society’s ladder.

She drags him off to see her new friend, Mrs. Fontage (Prusha), a widow on the brink of destitution, whose one hope for renewed financial stability is to sell her “Rembrandt. An unsigned painting of dubious provenance (actually a charmingly mediocre work by Bill Greenland) – and certainly NOT a Rembrandt – Thomas sees at once that it is worthless on the art market, but its value, both sentimental and financial, to Mrs. Fontage is enormous. To tell her the truth will rob her of what little hope and dignity she has left.

The way Thomas deals with this dilemma, and how his niece handles the aftermath, make for the kind of gentle comedy of manners for which Edith Wharton was famous. Along the way an impecunious bank clerk, Mr. Jefferson Rose (Renzoni), and Thomas’ persnickety Assistant Curator (Burnet) get involved and a happy and satisfactory ending is reached for all.

Biggs is all gentle smiles as the tender-hearted older curator, while Burnet brings the business-like bustle of the new generation of museum management. Renzoni is the picture of wet-behind the ears earnestness, and Greenland is beautiful and clever as the manipulative Eleanor.

Kathleen Doyle has created fine costumes for both shows. The audience is very close to the actors so every detail of costume construction is evident and some short-cuts have been taken, but they recede in the pleasure of the overall period look achieved. I was particularly fond of the Glen plaid suit Renzoni sported in The Rembrandt, and the handsome military attire of Schwager in The Bear.

While those who pine for the salon setting of Shakespeare & Company’s Wharton adaptations of the late 20th century will have to wait for the Thanksgiving week return of The Wharton Salon, this is the next best thing. The period aura of the old Town Hall and the obvious pleasure these performers – some of whom performed in those ShakesCo productions and with the Salon – take in Wharton’s work recreate the charm and intimacy of those experiences.

What I loved most about this whole experience was that nothing is plugged in. Everything is live and natural – sunlight, voices, music – just people using their talents to share art with others. Twenty dollar tickets and performances at 11 am and 6 pm make it easy to tuck a visit to West Stockbridge, along with a little shopping and dining in that delightful village, into your busy Berkshire itinerary. This is the quintessential Berkshire summer experience.