Small, quirky and fun: “Gutenberg! The Musical!” at the Theater Barn 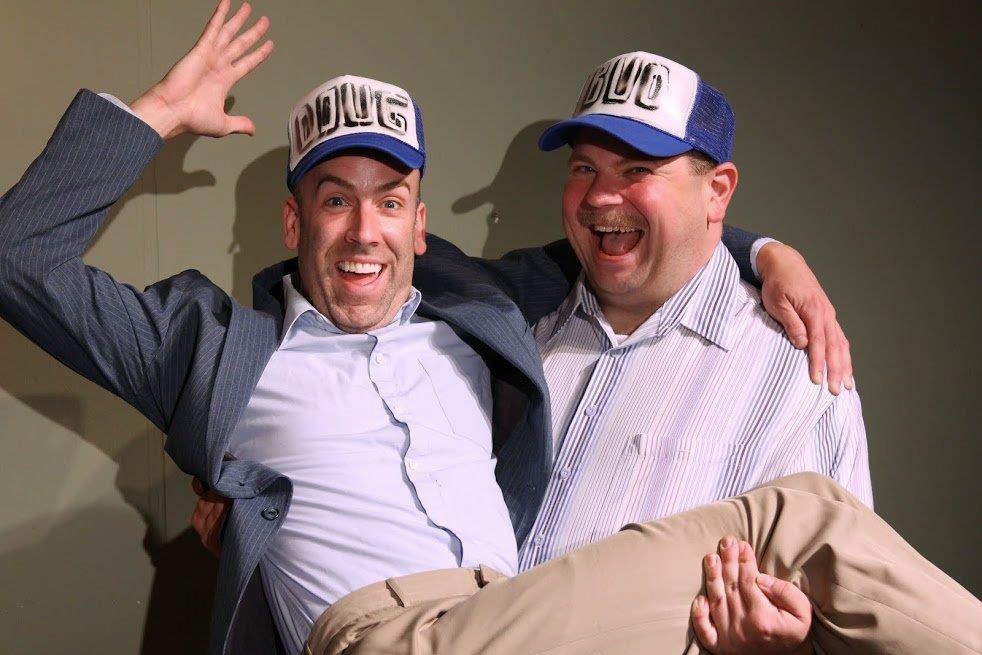 Small, quirky and fun: “Gutenberg! The Musical!” at the Theater Barn

Gutenberg! The Musical! at the Theater Barn
Theatre Review by Gail M. Burns and Larry Murray

Gail M. Burns: Gutenberg! The Musical! is the kind of small, quirky musical that the Theater Barn does extremely well, and that their audience just loves. And with just two actors, one pianist, and virtually no sets or costimes it also suits their small space and modest budget requirements

Larry Murray: I am always amazed at how the Theater Barn finds these little musical gems to keep us amused. And coming back for more. Anthony King and Scott Brown who wrote this two man show were also in it originally, when it ran just 45 minutes. Later it was expanded to two acts and had a significant 2007 New York production directed by Alex Timbers (Bloody, Bloody Andrew Jackson and The Last Goodbye) that starred our Williamstown favorite, Christopher Fitzgerald, and Jeremy Stamos.

Gail: The show is presented as a Backer’s Audition, a theatre ritual in which the creators of a musical do a concert version of their work before an audience of potential investors/producers. If the show involves proven talent, say Stephen Sondheim or Jason Robert Brown, stars interested in appearing in the production participate in the audition, but that is at a higher level than these two guys – a caregiver at a nursing home and a senior barista at Starbucks – have achieved.

Larry: Dominick Varney and Shaun Rice play Doug and Bud, an aspiring words and music team peddling their musical very loosely based on the story of Johannes Gutenberg (1398-1468), inventor of the printing press. Their comic timing and energy levels are remarkable, and Varney’s lithe and rubbery body is pretty amazing to see in action. Rice keeps up, barely, his strong suit being his amazing range of voices. He uses them to portray many of the dozen plus characters in this musical. Both use a variety of imprinted hats to indicate which role they are playing at the moment.

Gail: Hats, hats, hats! Specifically cheap blue and white baseball hats. At times, when they need to play many characters in succession, they stack them high on their heads, like the peddler in Caps for Sale. A lot of mental energy must go into getting the hats in the right order.

Larry: Allen E. Phelps direction was simple and snappy as the pair of Broadway wannabes sang and danced through 15 songs and a zillion gags about the invention of the printing press and the characters that inhabit the little German town of Schlimer, a happy and cheery place except for the fact that the town is horribly dirty and depressing and no one except Gutenberg and a monk in a nearby monestary can read.

Gail: Illiteracy was the common state back in the 15th century. Really, only clergy could read, and Doug and Bud make Gutenberg’s nemesis an evil monk who wants to keep the townspeople in ignorance so that he can make the Bible say whatever he wants it to say.

Larry: The music comes in a variety of styles with Mason Griffin at the keyboard which alternates piano and organ effects with other synth sound. As you know, Gail, I hate this sort of accompaniment, and the songs were the musical equivalent of emoticons, but in all fairness the score was delivered directly and accurately, although devoid of any real color or feeling due to the nature of its artificial origins.

The problem with the sounds created can be explained this way. Harmonic content changes over the course of a musical tone, and this contributes to the instrument’s timbre. In particular, the very beginning of a note from a musical instrument is crucial to how you identify it. When a piano hammer first touches a string, or vibrating air is propelled into a metal or wooden tube, very complex harmonic activity occurs. This complexity decreases very quickly, but without it, musical tones sound dull and far less interesting and distinctive. Half a century ago I spent a year working with MIT in Cambridge to develop artificial sound, and for all the “attack, decay, sustain” elements we created, we could never get those complex harmonic parts right, there were millions of variations depending on how hard you tapped a piano key, the release and the effects of pedaliing. These commercial machines try, but they are high fructose corn syrup to the real honey of genuine sounds.

Gail: I am pretty immune to modest accompaniment, but I was surprised at how unmemorable the tunes were and how insipid the lyrics. Even a spoof of a musical can be clever and tuneful – The Musical of Musicals: The Musical which the Barn staged back in 2008 comes to mind. I was going to buy the cast album, but now I can’t think of a good reason to.

Larry: My personal quibbles aside, Gutenberg! The Musical! is a harmless evening of light entertainment, one that could be a good choice for a family looking to do something fun and different with the extended family that is not too challenging, yet entertaining.

Gail: The success of any production of this show REALLY depends on the cast, and here Dominick Varney and Shaun Rice are very good, but they fall just short of amazing. It they just had that extra bit of sparkle this production would be a must-see. As it is, it is an enjoyable little piece of theater for a reasonable price.