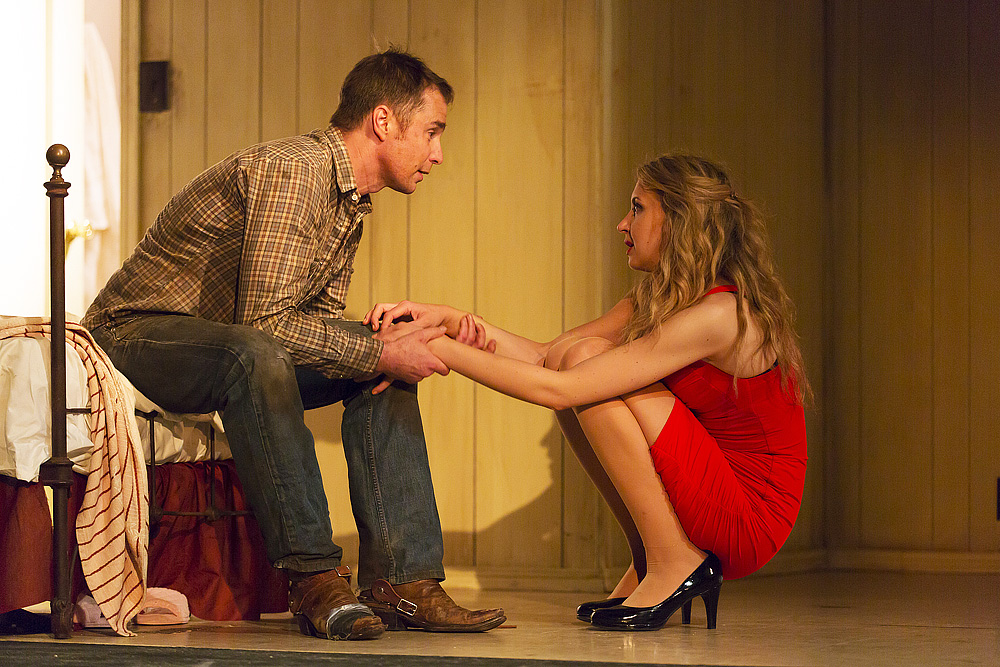 Nina Arianda and Sam Rockwell in Fool for Love at the WTF
Theatre review by Gail M. Burns and Larry Murray

Gail M. Burns: Playwright Sam Shepard says that his own experience of being in love inspired the aptly titled Fool for Love, now on the Nikos Stage at the Williamstown Theatre Festival. He wrote: “”[Falling in love is] such a dumbfounding experience. In one way you wouldn’t trade it for the world. In another way it’s absolute hell. In the play May and Eddie (Nina Arianda and Sam Rockwell) are both trapped, dumbfounded, in their own mutual hell of love.

Larry Murray: Their relationship hit the rocks ages ago, yet something still binds them together. This passion is at the core of Shepard’s raw and emotion-drenched drama. Like watching a catastrophic storm destroy the foundations of our lives, we watch the two lovers cling to each other like life rafts even as they try to flee from the tumultuous waters of their own unpredictable relationship.

Gail: And we discover the brutal roots of their affair over the brisk, intermissionless 75 minutes of this production. Eddie and May are more than lovers, they are half-siblings whose mutual father kept two wives and families secret from each other until after his unwitting offspring had fallen in love in high school.

Larry: Fool for Love was written three decades ago, yet like so much of Shepard’s work it still holds us in its thrall as the pair confront their passion for each other, and the inevitable pain that May will feel when Eddie’s wanderlust kicks in again. The script is at times subtle with much to read between the lines, a masterpiece of understatement and allusion. But as with Sam Shepard plays, the words escalate into explosive action, the actors tearing at each other like mortal enemies. Everything happens in May’s seedy motel room while Eddie practices his lasso tricks, swigs beer and cleans his shotgun. When Eddie isn’t looking, she packs her suitcase in order to make a quick getaway. As a story, how do you feel this 1983 play has held up?

Gail: Shepard’s plays are timeless in the way Greek tragedy is. Both are about the deep core emotions of humanity, not the bells and whistles of topical references or technology. Love, sorrow, anger, joy, jealousy – these emotions have not changed over the millennia.

Larry: Fool for Love is being performed for for the first time in Massachusetts and is directed by Daniel Aukin, whose staging is alternately down to earth and yet often edgy and experimental as the characters go for a heightened reality.

Gail: Shepard is a deeply theatrical writer, able to command the stage with a monologue was well as with explosive action, and Aukin fully understands this. The scenic design by Dane Laffrey imprisons Eddie, May, and May’s hapless date Martin (Christopher Abbott) in a sordid shoebox of a motel room, positioned off kilter stage right. Close by the stage left wall of the room, where the motel room door is situated, sits The Old Man ( Gordon Joseph Weiss), Eddie and May’s father. Is he dead or alive? It doesn’t matter. They can’t see or hear him, although he is always with them, but he can see and hear them. They tell their story, his story, and he adds bits or disputes their versions. Finally, he becomes so enraged that he enters the motel room and rants at them – to no avail.

While Rockwell and Arianda are at the center of the play, Weiss and Abbott are also vital to the telling of the tale. I found Abbott breathtakingly inert, literally nothing but the unwilling audience May and Eddie require to allow them, and their stories, exist. Weiss communicates clearly the blind self-absorption that has allowed The Old Man to ruin so many lives and emerge unscathed physically and emotionally.

Larry: The technical crew adds depth to the play. For example Ryan Rumery’s sound design surprises us by amplifying the finality of slamming doors. Justin Townsend’s lighting morphs at times from a bland motel room to sensuously crepuscular lighting. Sometimes the light changes mean everyone is in silhouette except the storyteller. Also impressive is the multi-dimensional effect of auto headlights. These integral effects enhance the hyper-reality that Shepard is so famous for. Even the stage set is elongated, like a Cinemascope screen, perhaps to pay homage to all those John Ford westerns that used to fill our lives.

Gail: The look of this production was just as dramatic as the play itself. This is one of those happy theatrical events when every aspect of the production – script, direction, acting, set, lighting, sound effects, costumes – came together and amplified each other to create a coherent whole.

Larry: I was disappointed when Chris Pine and Lauren Ambrose bowed out of the original cast, but having had a chance to see award winning Nina Arianda and the elusive Sam Rockwell more than made up for it, don’t you think, Gail?

Gail: I was never as excited as you were by the original casting, but was thrilled to learn that Arianda was coming to town. Her visceral and committed performance did not disappoint and I can see why she has been so immediately acclaimed as one of the best actresses of her generation. Rockwell was every bit her equal and they made a dynamic couple. I hear they really enjoyed working together and with Aukin on this production, and it shows.

Larry: Fool for Love has hit all the right notes for me, and is one damned fine evening of theatre, don’t you think?

Gail: This is Theatre with a capital T. Shakespearean in scope but compact by design. I cannot imagine a finer production.