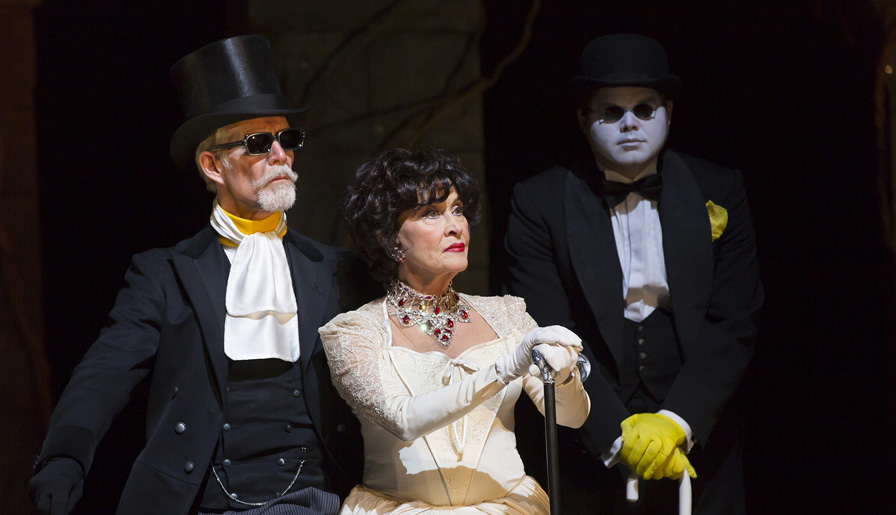 ‘The Visit’ exacts a terrible price
as the richest woman in the world returns home
Theatre Review by Gail M. Burns and Larry Murray

Larry Murray: From the moment you take your seat at the 62 Center where the Williamstown Theatre Festival performs, you know you are in for a special evening. Soaring into the flies on stage is Scott Pask’s single set that will contain the evening’s performance of The Visit. This tuneful John Kander and Fred Ebb musical has been trying to get to Broadway since 2001. With a book by Terrence McNally and Chita Rivera in the lead role as Claire Zachanassian, it could be well on its way. The WTF production is directed by John Doyle, who knows how to showcase the darker side of human nature, the rich manipulating the poor, and it couldn’t be more timely.

Gail M. Burns: This is billed as Kander and Ebb but since Fred Ebb’s death in 2004 Kander and McNally have formed the creative team. Doyle made many changes for this version – cutting the show from two and a half hours and two acts down to a 95 minute one act form – so the lyrics have obviously been changed since Ebb wrote them.

Larry: The 2001 production was put together at Chicago’s Goodman but 9/11 killed its prospects when New York producers were unable to fly in to see it. The Signature Theatre in Arlington, VA staged a workshop production in 2008 and now in 2014 it looks like the Williamstown team has put together the definitive version. Earlier productions were a bit top heavy having incorporated far too many characters and details from Friedrich Dürrenmat’s 1956 satirical play about greed and revenge Der Besuch der alten Dame.

The tightening up of the show has worked well, and only a few songs have been lost – the Chorale that opened Act 2, Claire’s “Confession” song, and the reprise of “Winter” by a Young Adam. Other songs have likely been shortened a bit to keep things moving swiftly. They were not missed, since the story is still delightfully rich, full of detail. (See the complete Kander-Ebb song list for The Visit Williamstown – which was not printed in the program – below.) With a large cast and luscious ten piece orchestra under David Loud, this Williamstown production fully conveys a dark parable about what desperate people will do when faced with a financial payoff.

Gail: If killing one individual will benefit society at large, is it worth it? The answers over the millennia has almost always been yes, or at least those are the stories history has preserved for us. There may have been just as many times when opposite decision was made, but they have not bee deemed worth re-telling.

Larry: Everyone wants to know how an 81 year old veteran of the stage like Chita Rivera does in this musical, and the answer is that she is simply spectacular. And she has spent the last 15 years working on this role.

When Claire Zachanassian was a young teen in the small town of Brachen – somewhere in central Europe – she fell in love and got pregnant, The town decided she was a whore and she left, leaving behind a young Anton Schell (Roger Rees) whom she loved, but who turned on her. She returns the richest woman in the world and is planning her revenge. As Claire, Rivera carries herself regally, even as she explains her loss of limbs and infirmities acquired during a life of endless striving. When she returns she reunites with Anton, now married to Mathilde (Judy Kuhn) and the father of two grown children – Karl (Jude McCormick) and Ottilie (Melanie Field).

It was frustrating that the WTF only listed the characters’ names in the program, and not their occupations. Their names were hard to catch while their societal roles were clearly conveyed by their costumes. Without considerable effort, a familiarity with some of the actors, and access to captioned photos – something the average theatre-goer would not have – I would not have been able to piece together who played who.

Larry: Because of Claire’s infirmities this is a musical that doesn’t lend itself to much dancing, though Rivera did take a couple of minor turns during the course of the play. Much was left to Michelle Ventimilla as Young Claire and John Bambery as Young Anton to portray the younger, more vivacious aspects of the two older lovers.

Gail: Claire has a false leg and arm. Rivera is 81. But people want to see Chita Rivera dance! And choreographer Graciela Daniele finds some subtle ways for this terpsichorean legend to demonstrate her showmanship.

Larry: The tale takes a macabre turn when Claire offers the town billions of marks if the destitute townspeople will kill Anton. Claire, as it turns out, has brought a casket with her for his remains, along with her her loyal butler Rudi (Tom Nelis). The two blind eunuchs were named Lenny and Benny in earlier productions, but in the WTF show are referred to as Louis Perch (Matthew Deming) and Jacob Chicken (Chris Newcomer). Counter-tenors who sing in the upper range many term the “falsetto” voice, hey are dramatically costumed all in black and white with bright yellow shoes and gloves. Their identities and gruseome ties to Brachen and to Claire and Anton’s history are revealed later in the show.

Gail: Doyle doesn’t give that coffin a significant entrance, so I think it’s important to point out that it is on stage continuously following its early entrance with Claire’s luggage. It is sat upon, stood, upon, danced upon, lain upon – it follows Anton and the townspeople of Brachen just as surely as death dogs our heels throughout life.

Another poignant moment in the show which McNally and Doyle gloss over without sufficient explanation comes at the end when the town votes on Anton’s fate. The three women do not vote yet the verdict is deemed unanimous. That is because in Switzerland women did not obtain complete suffrage until 1991! Only the men can vote. Claire tries to vote but is scolded by the Mayor, but no explanation is given, leaving a modern American audience in the dark.

Larry: In recent years musical theatre seems to have developed a dark side, don’t you think?

Larry: Exploring the human condition has always been one of theatre’s great traditions, and Williamstown has taken great risks taking on this seemingly cursed musical. But with the guiding hand of John Doyle – and his close collaboration with Kander and McNally – I think they have pulled off a truly remarkable evening of musical theatre, one that is filled with lingering images and melodies. Songs like “You, You, You” which start off so sweetly end up being the intro to Claire’s deadly plan. When the townspeople don “Yellow Shoes” bought with money that can only come by killing Anton, they stand in as a metaphor for their cowardice to simply stand up to Claire and say no.

Gail: But this brings us to the dichotomy we discussed between the show’s sound, its look, and its source material. I have always considered mid-career Kander and Ebb shows like Cabaret and Chicago to be safely Americanized versions of the biting and iconic scores Kurt Weill created with Bertolt Brecht and others. Writing a decade later Dürrenmat acknowledged the influence of Brecht and his theory of Epic Theatre. So there is a real Brechtian look to this production – especially in the costumes by Ann Hould Ward and hair and wig design by Paul Huntley and the uncredited make-up designer – but Kander is through imitating anyone, even the great Weill. The music is all John Kander and it has a distinctly American Broadway sound. Just because we have come to expect a certain sound to accompany a certain look on stage doesn’t mean it has to always be that way. I wasted too much time waiting for Kander’s music to sound “Weillesque” before I realized that it wouldn’t and it didn’t have to!

Larry: The Visit is a fast 95-minute intermission-less whirlwind that very quickly swept me off my feet and kept me hanging on every word and note until the curtain calls. It ís another “don’t miss” production from the WTF.

Gail: I agree this is a great show, and my favorite part of the evening was the unscripted, unrehearsed radiant smile of joy on Chita Rivera’s face as she and Rees stood together on stage for their solo curtain call. She loves the theatre, she loves this show, and she was just plain thrilled to be alive in that time and space. It brought tears to my eyes. A Grande Dame indeed!

For more on The Visit, check out our preview article which features interviews with the principals and several video clips of earlier productions.