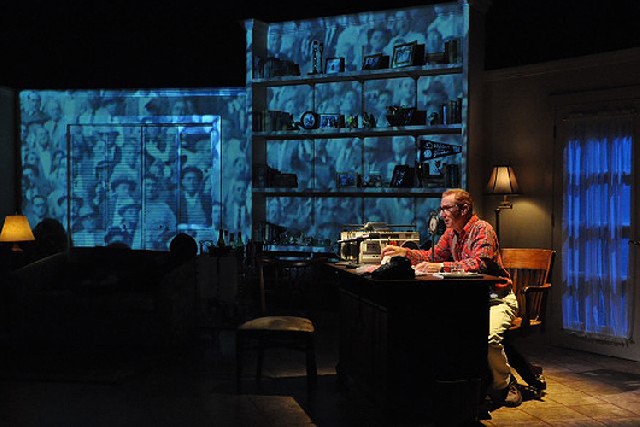 Red Remembers is a home run for the Berkshire Theatre Festival. This one man show is based on the life and career of Red Barber, a famous radio sportscaster who detailed the plays of the Brooklyn Dodgers when they were at Ebbets Field, and later for the New York Yankees. He was a familiar voice in my youth, and Dave Garrison has nailed down the essence of it. It is said that when the game was on the radio, you could walk down any street in Brooklyn and not miss the play by play. He was as ubiquitous in those days as the long departed Brooklyn Eagle newspaper, another legendary part of daily life before television.

In taking hold of the subject of baseball, playwright Andrew Guerdat grasps the essence of the sport, following the ball itself and the players it touches on its often convoluted journey from pitcher to catcher. The players and statistics change all the time, but the game changes hardly at all.

The game is fascinating, and has lasted through the decades because of both its simplicity and complexity. As a sport, it is more like chess than anything else. The odds are against the players because nobody, not even the most gifted hitter, gets it right more than 35% of the time. This concept is outlined during the play by Red Barber, played by the incredibly versatile actor David Garrison. But many of the underlying themes are the ones deduced by the writer from the limited information about the life of a simple man who became a constant companion to millions of baseball lovers, and to his loving wife.

Speaking with the playwright before the performance, it was instantly apparent that he was smitten with America’s summer pastime, as is Kate Maguire, who admitted that her love of baseball led her to decide to give this new play the full treatment, off season, in the Berkshires. Guerdat said that his work had the benefit of several staged readings, both in Los Angeles where he lives, and in New York City.

What has ended up on stage is handsome, clever and nostalgic. A living room with Red’s desk, a lush garden outside, a wife in the last stages of Alzheimers in an adjacent room. We never see her, but do hear her drop things during the course of the play. It is a time long after his career has ended. Still NPR wants his services as their on-air personality to add color to their sports coverage. David Garrison has one amazing scene where, the phone stretched to its limit, he is babbling away about some long-ago play while getting his wife to take her medications. The moment was almost balletic in nature – if only he were not facing his own problems of advancing old age.

Garrison delivers a long and colorful stream of anecdotes, opinions, Biblical quotes, a passage from Heminway’s Old Man and The Sea and even a few notes of an aria during his time on stage. In flashbacks we see him at the microphone, retelling some of the great plays in baseball history. These segments arrived complete with the illusion of stadium lights from the geniuses who designed the set. Clever, awesome, “method” set design, all too rare in these frugal times.

Once in a while, as the tale unfolds, the lights dim as the memories go deeper and projections supplement the narrative. These are lovely moments when we are transported to Ebbets Field, Yankee Stadium, the Metropolitan Opera, or the glittering surroundings of Manhattan in an earlier time.

There is another moment recalling the old days when some radio stations had to cease broadcasting at sunset. Back in those days we would hear stations not by twisting a dial, but by readjusting the position of a thin needle on a small crystal to try to find another station. I did that as a kid.

Overall, this new play brings memories back for those of us who have been around a while, and so there are likely to be tens of thousands of baseball fans who will love hearing the wonderful tales of Joe DiMaggio, Jackie Robinson and the other great players of the 40’s and 50’s. There is even a story of Marilyn Monroe and Joe DiMaggio taking a shower together, one quite unlike those in ballpark locker rooms.

There are many funny moments too. Red Barber was a keen observer of human nature, including his own character defects. So Red Remembers is not just a baseball story for veteran observers. It is far more. His story becomes that of one man’s love for his ailing wife, and his inability to imagine life without her. His daughter insists it is time for him to face reality. Sadly, she is in the third stage of Alzheimers, dementia. Red slowly, begrudgingly, packs her bag for the inevitable trip to a long term care facility. This play, more than any other that I have seen, illuminates the pain of this quandary. Red is torn by this dilemma. He finds momentary solace by returning to his familiar baseball tales. These short flights from the painful reality of his life to the happier memories of the past are the touchstone of Red Remembers.

As the story reaches its final scene, Red Barber Remembers what is truly important and does the right thing. That scene turns out to be the finest moment of the Berkshire theatre season of 2009. And you should not miss it. Red Remembers. See it. Feel it. You’ll remember it, too.

This review first appeared in Berkshire Fine Arts on September 13, 2009