Berkshire Fringe: ‘SOLO: a two person show’ and ‘The HunchbackS of Notre Dame’ 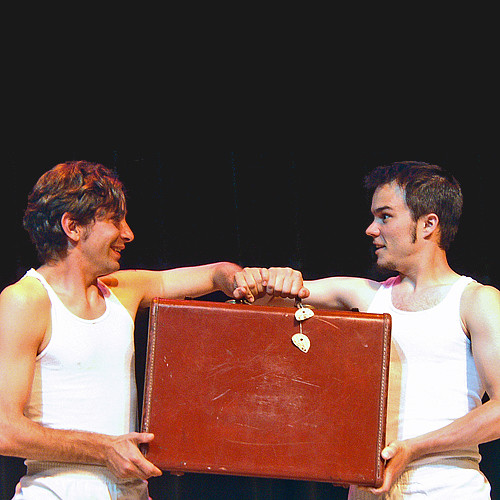 Berkshire Fringe: ‘SOLO: a two person show’ and ‘The HunchbackS of Notre Dame’

Under the Table ensemble is relentlessly imaginative
Theatre Review by Gail M. Burns and Larry Murray

Gail M. Burns: Now in its tenth season, Berkshire Fringe Festival never fails to surprise me. Every summer, I look forward to their annual presentation of the latest in innovative theatre. So what caught your interest this year, Larry?

Larry Murray: Not having attended as frequently as you, I really liked that they brought back their most popular artists, many of whom I had not seen before. For example, Under the Table surprised me with their versatility since SOLO and HunchbackS were so very different in both concept and execution. Because it was based on the relationship of two brothers, SOLO is alternately a touching and ironic send-up of fraternal relationships even as brothers Matt Chapman and Josh Matthews were climbing mountains, fighting overgrown jungles, and dealing with the devil.

Gail: Let’s not forget the evil mountain goat! I just loved SOLO, which makes its point about sibling love and rivalry in delightfully subtle ways. And the physical humor is fearlessly creative.

Larry: The Berkshire Fringe Festival is hosting the world premiere of HunchbackS of Notre Dame in a totally fraudulent reimagining of the famous Victor Hugo tale. While SOLO utilized traditional physical comedy, mime, acrobatics, dance and puppetry, HunchbackS offered something really fresh and new. It was a cross breeding of what might be called clown theatre with the home shopping channel and cartoonish characters that came to life. The laughs were generated mostly by the clowning, too. That traditonal form has been going through a lot of changes to keep up with the more sophisticated audiences of today.

Gail: All three performers – Chapman and Matthews are joined for HunchbackS by Sarah Petersiel, who also helped create the show – have trained at the Dell’Arte International School of Physical Theatre www.dellarte.com and worked as clowns for the Big Apple Circus. They each have well developed clown personas, but we had concerns for their safety on what appeared to be a rather rickety rented scaffolding.

Larry: As in European cirque, the performers interacted with the audience before they began the performance. At HunchbackS Johann (Matt Chapman) was trying to sell the audience trinkets while Paul (Josh Matthews) handed out papier-mâché “rocks” to the audience. He seemed to pay special attention to you, too.

Gail: I got at least 17 loud double-cheek kisses (Mwah!) and four rocks from Paul, but who’s counting?

Larry: I was in turn taunted and tempted by the great seductress Hilda Hunchinson as Esmeralda (Sarah Petersiel) but our flirtation was suddenly broken off as the show continued. I often shrink from the commonplace audience participation routines, but at both Under the Table performances they were so clever and interactive it was impossible not to join in.

Gail: Well we were sitting in the front row so we were prime targets. Also the Berkshire Fringe is an intimate setting, even more so this year in their new venue at the Shire City Sanctuary in Pittsfield. There was less separation between backstage, onstage, and the house, so there was more opportunity for performers and audience to interact throughout the evening.

Larry; Mixing highly skilled physical dexterity with music and improv and solid basic scripts makes for a delightful – and unpredictable – evening at the Fringe. Both SOLO: A Two Person Show and The HunchbackS of Notre Dame gave this company a chance to show the range of their creativity and physical dexterity, and I would recommend it for anyone with an active imagination coupled with an appreciation for slapstick comedy.

Gail: I would recommend HunchbackS as a cartoon-like family- friendly romp (well, Hilda does get a bit out of hand from time to time, just don’t let your young sons copy down her phone number), while SOLO is more thoughtful, theatrical, and physical. But both are engaging – offering fresh perspectives on theatre and clowning.