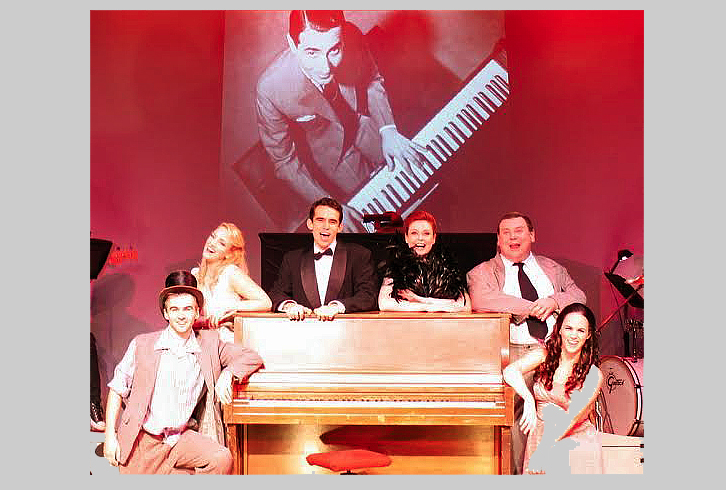 At the Theater Barn: “Irving Berlin’s I Love a Piano”
by Gail M. Burns

Irving Berlin’s I Love a Piano is a revue of songs by the inimitable Irving Berlin, but creators Ray Roderick and Michael Berkeley have crafted a pleasant evening with a singular flow and have avoided one of the major pitfalls of the revue-sical genre – too much exposition painfully forced into dialogue.

You really don’t need to know that Irving Berlin (1888-1989) was born Israel Isidore Baline in Russia, emigrated with his family to New York City in 1893, dropped out of school at age eight to become a newsboy and discovered that he could sell more papers if he added a little song to his sales pitch in order to enjoy this show. Chatty critics like me can tell you all of that, and there are plenty of good biographies of Berlin out there too. You just need to know a good song, well sung, when you hear it.

And they are all good songs, well sung, by a young and talented sextet under the smooth direction of Trey Compton – Theater Barn vets Stephanos Bacon, Jerielle Morwitz, Shaun Rice, and Kimberly Suskind, joined by newcomers Maclain Dassatti and Eileen Whitt – with a fine range of talents.

Thanks to choreographer Lara Hayhurst there is some pretty nifty dancing in there too, something we see too little of at the Theater Barn, which tends to leave the hoofing to their Columbia County neighbors at the Mac-Haydn.

The seventh character in this show (Or perhaps that should be the eighth as surely Irving Berlin himself deserves the number one slot!) is a non-functioning upright piano.

This show is all about the music and the performers. There is virtually no spoken dialogue at all, and while the performers do take on many different roles, most of them are not distinct “characters” with names and back-stories. The “plot” is as simple and as broad as the 20th century American experience that Berlin’s song’s describe so well. Starting in 1910 with his first hit, “Alexander’s Ragtime Band,” and traveling through to the late 1950’s, Berlin’s music clearly informs the audience of the time period and mood. Sadly, Logane Robinson’s costumes cannot keep pace, often being embarrassingly wrong for the period portrayed.

Berkeley did the musical arrangements, which segue Berlin’s songs seamlessly together. Musical Director Morgan Griffin on piano, Roger Mason on bass, and Ian Tucksmith on drums provide consistent and tuneful back-up for the singers and occasionally convince you that the prop piano is really being played.

Irving Berlin wrote a pile of music in his 101 years of life, all of it very American and none of it less than good. “I Love a Piano” is packed full of almost everyone’s favorites – “A Pretty Girl is Like a Melody”, “Blue Skies”, “Steppin’ Out with My Baby”, “Puttin’ on the Ritz”, “Cheek to Cheek”, “Always”, “What’ll I Do?”… And that’s just Act I.

That act ends with a World War II montage including two of Berlin’s most iconic numbers. “White Christmas,” is poignantly sung by a deployed soldier (Bacon) and his sweetheart (Whitt) on opposite sides of the ocean, until Morwitz takes center stage and belts out “God Bless America” as Johnny comes marching home.

The heart of Act II is an audition for the title role of Annie Get Your Gun at a summer stock theatre in the late 1950’s. Rice plays the long-suffering producer, Dassatti the self-absorbed lothario playing Frank Butler, and Bacon the endlessly patient stage manager, all trying to maintain their sanity while Whitt, Suskind, and Morwitz duke it out for their attention and the starring role. In this segment the actors actually do play distinct characters, and the blend of comedy and music is delightful.

Act I gets off to a slow start, but by the end of it it is evident that Rice and Morwitz are the more experienced pros. Rice, who often gets cast more for comedy, gets a chance to show off his fine singing voice here. Morwitz is inexplicably cast as the older and less attractive of the women (Huh??) but Compton wisely gives her some iconic solos.

In Act II everyone gets to shine. Whitt proves herself a talented dancer and comedienne in the junkyard sequence with Bacon, and Suskind is the clear winner (yes, even over Morwitz) for the title role in Annie Get Your Gun.

This evening of familiar and memorable music, professionally and energetically presented, is a fine summer entertainment sure to please Barn audiences.