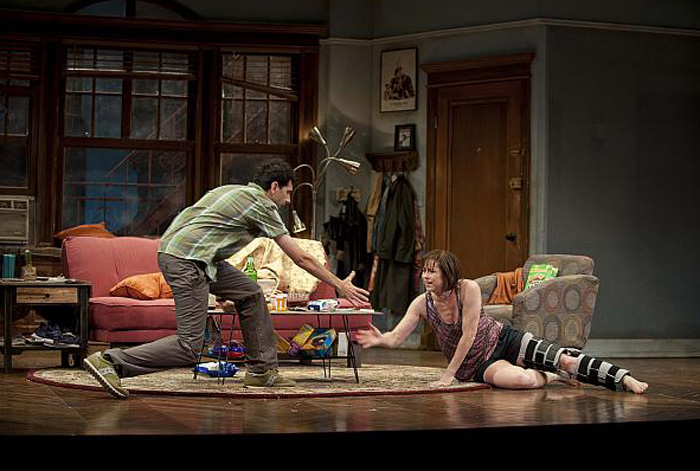 An unlikely couple and their Dancing Lessons win us over

Larry Murray: Mark St. Germain’s newest play Dancing Lessons could easily be categorized as a play that teaches us something new. And when it comes to Asperger Syndrome, it is certainly both instructive and inspirational on that subject. But that is a by-product of what has to be St. Germain’s best work to date. It is really a romantic comedy at heart, and takes us to the verge of tears even as we are laughing delightedly at a young couple trying to figure out how to deal with each other.

Gail M. Burns: There are more and more people with diagnoses on the Autism Spectrum, and what they teach us is that there is no such thing as “normal.” Everyone’s brain and body function and experience the world differently and society makes an enormous error when it tries to force humankind into any mold. Every couple faces challenges as their relationship develops because there is no other place where we are as intimately and openly ourselves.

Larry: There are only two characters in this one act play, Paige Davis (as Senga Quinn, a successful Broadway dancer) and John Cariani (Dr. Ever Montgomery – a professor of geosciences who is about to be honored for his achievements). Both were at the top of their game, but are under new stress as they tentatively come together and blow apart as the story unfolds. Because of his Asperger’s, Ever is aware that he sees the world differently than most. Yet he needs help in fitting into the normal world. He uses the term “neuro-typicals” to describe people who are not like him. He refers to himself as an “Aspy,” an abbreviated description he likes to use. What I find interesting is that Senga – who is a dancer and actually sidelined with an injury – is also searching for answers.

Gail: Both characters are facing a crisis of self. Ever is very intelligent and “high-functioning.” He has had great success in his chosen field, but is terrified of relating on a personal and physical level. Senga (her name was supposed to be Agnes but her aunt wrote it backwards on her birth certificate) has achieved success as a dancer – studying and performing with some of the top choreographers and their companies, and appearing on and off-Broadway – but she was hit by a taxi and her left leg is shattered, with seriously torn muscles and ligaments in her knee. Her only hope for any kind of recovery is surgery, which a rare allergy to anesthesia prevents, and even then she will never be able to perform at the level she did before.

Both are at a point of asking “Who am I and what is next for me?” Ever does not want to continue being just a brain disconnected from the reality of his needs for love, sex, and companionship. Senga does not know how to establish a new identity now that she can no longer be a dancer, and is hiding behind a lifetime of lies. They are, as Stephen Sondheim so eloquently wrote in “Send In the Clowns”: “One who keeps tearing around, one who can’t move.”

Larry: Cariani’s depiction of Ever captured so many traits that we tend to associate with Asperger’s – the hands flattened against the thighs, the blurting, the avoidance of actual touching, the inability to deceive – that it stopped feeling like acting, and seemed to simply be real. Paige Davis’ Senga was his opposite, an unpredictable character, bobbing and weaving to avoid personal questions, and maintain the fantasy world she had constructed for herself.

This is the genius of the play, that the normative person is the one out of synch with reality, while the Autistic Ever is more in touch. The moments when this occurs are simply luminous, teaching us neuro-normatives that our rationalizations are no solution to the global catastrophe that we are bringing on ourselves and so many other species as our exploitation of the planet is bringing us to a cataclysmic point.

Gail: Ever uses a series of images of facial expressions to help him interpret what he is seeing and understand what others are feeling, and there was a touching moment where he understands that Senga is afraid of living a life in which she cannot be a dancer. In order to cheer her up, he arrives at her door with an electronic gadget blaring “Tomorrow” from Annie. Ever loves to solve problems and Senga ultimately understands the amount of thought and effort he has put into this slightly misguided attempt, rendering the scene both hilarious and tender.

Another real turning point in their relationship was a wordless scene in which they were online in their separate apartments, each researching the other. Their computer screens were projected high on the set, and we saw their reactions as they got glimpses into each other’s worlds.

Gail: It is certainly the most charming one I have seen to date. His recent plays have been based on real people and events, this one seems to come straight from his heart, even though it is technically an “issue play.” It reminds me most of The Best of Enemies where St. Germain showed how even two remarkably different people – in that case a black civil rights activist and a white Ku Klux Klan leader – can find common ground and forge a relationship.

Larry: Directed by Julianne Boyd, the play has the benefit of being both deep drama and light comedy, in a blend that has become her trademark. Boyd knows that shared stories are the foundation of our identities, as well as the necessary bedrock of community. Even so, it is the humor, along with the tender gestures and moments that forge the connections that develop between a play’s characters and its audience. Dancing Lessons has plenty of both, and as with other plays she has directed, I always find the evidence of her expertise reflected by the audiences themselves, by their rapt attention and total absorption in what is unfolding on stage. Putting an audience inside “the zone” is one of the miracles of well done theatre.

Gail: Cariani is a gifted comedian, but this role also proves what a fine actor he is. I completely believed that he was Ever. There was never a moment that I saw through the facade, even at the very end when he and Segna embark on a wonderful fantasy sequence. Choreographed by Christine O’Grady who has worked her magic on eight seasons of BSC Youth Theatre musicals, that allows them to dance free from their mental and physical challenges.

Living without cable TV, I had no preconceived notions of Davis as a reality show host. She is a talented and appealing actress and a good match for Cariani. I loved that he kissed her on both hands during the curtain call. It looks as if they have enjoyed working together on this tender and intimate play.

Larry: Dancing Lessons incorporates many contemporary elements – from projections to fantasy sequences – that are being seen more often in mainstream productions. The work of James J. Fenton on the sets combined with the projections of Andew Sauer and Mary Louise Geiger’s lighting all worked together to enhance to story. Those elements – so integral to the story – made it clear why Dancing Lessons could only be successfully done on the Boyd-Quinson Mainstage,not in a smaller black box theatre.

Dancing Lessons may be talked about because it’s a new play about Asperger’s, but it is also a glimpse into how – when people are at their best – we can always find a way to connect, to work together in harmony, and to make life worth living.

Gail: In a way, it is sad that we need an endless parade of plays and films and TV shows reminding us that we are all basically the same – that people of different colors and shapes and sizes and religious backgrounds and sexual orientations and mental states are first and foremost PEOPLE with very similar dreams, desires, and rights. But if we do need them, and it seems quite apparent that we do, let them all be as witty, warm, and entertaining as Dancing Lessons.