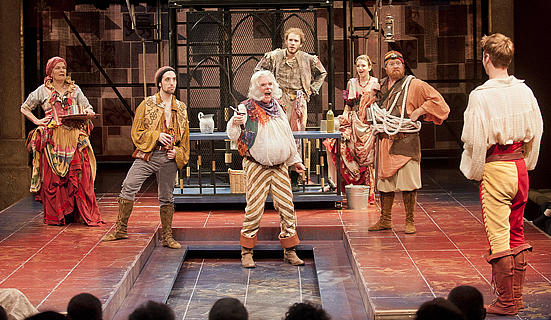 Shakespeare’s two history plays purporting to be about King Henry IV of England (1367-1413 CE) are actually about the coming of age of his son, the future King Henry V (1386-1422 CE). They form the center of the Bard’s tetralogy which begins with Richard II and ends with Henry V, although some will argue that Henry VI, Parts I, II and III are also a part of what becomes then a seven play cycle. All of this was quite recent history for Shakespeare (1564-1616 CE) and these plays were not only very popular entertainment, but also formed the Tudor equivalent of the required high school course in American History we are familiar with today. At a time when most people were illiterate and few had any formal schooling, they could learn the Royally Sanctioned history of their land at the theatre while laughing at Sir John Falstaff and his merry band of thieves and whores.

Performed in their entirety, Henry IV, Part I and Henry IV, Part II occupy the stage for a good seven hours. Hard to perform apart contextually, they are impossibly expensive and time consuming for a modern company to perform together. Starting off last year with a production of Richard II, Shakespeare & Company wanted to continue on with the history plays, and so commissioned actor/director Jonathan Epstein to condense Henry IV into one play. The resulting work runs a solid three hours, and when you add in the much-needed 20 minute intermission you walk out of the theatre about three and a half hours after you entered. Thankfully the evening performances start at 7:30, not 8 pm.

Epstein has cut much of the history in favor of the excellent comedy in the plays, but sadly that renders the politics and battles that remain even harder for the average audience member to understand. Adding to that muddle, just about every significant political player is named Henry (and sometimes called Harry or Hal), which is neither Epstein nor Shakespeare’s fault, that’s just history. For the sake of clarity in this review we will refer to them as Henry IV, Prince Hal (the future King Henry V), Hotspur (Henry Percy), and Percy (Hotspur’s father, the Earl of Northumberland).

But that’s not what this play is about. Its about Prince Hal’s metamorphosis from wild-living youth to responsible monarch. By the end the bookends of his youth – his father and his drinking buddy Falstaff (Malcolm Ingram) are dead. Here Epstein makes it clear that Falstaff dies of a broken heart after the newly crowned Henry V publicly disavows him and his carousing comrades – Bardolph (Toomey), Mistress Quickly (Bock), Doll Tearsheet (Kilgore), Mistress Fang (Grace), Justice Shallow (Coleman), Ancient Pistol (Venable), Francis (Benjamin Epstein), Davy and Peter (Sovronsky).

Have you got it all straight? No? Well, if you are one of the few who answered in the affirmative, bravo. The whole thing is overwhelming. As if keeping the the characters and the history straight (and remember that Shakespeare’s version isn’t factual, nor does Epstein’s version coincide with Shakespeare’s) wasn’t enough, Epstein has decided to confuse the era. The costumes by Arthur Oliver, are handsome and versatile, but also deliberately timeless. Actors carry iPhones and laptops. They pack pistols along with swords. The modern electronic diversions are often good gags, but Shakespeare’s lines alone have generated plenty of laughs without them over the centuries.

What saves this production from mind-numbing disaster is a vivid and fiery central performance by Clarke as Prince Hal. Clarke is young, handsome – he even bears a slight resemblance to the current Prince Harry – and talented. He commands the stage. I sincerely hope the Company has the good sense to have him come back next season and star in Henry V, because after seeing him here it is impossible to imagine another actor in the role.

Ingram has played Falstaff before in Lenox, in The Merry Wives of Windsor in 2006. While he is the right age, he is the wrong shape and temperament. To see Michael J. Toomey, who, although yet a little young, would be a fabulous Falstaff standing beside Ingram on stage practically made me weep. A gray wig and a little padding and Voila! Instead Toomey is starring this summer as Puck in A Midsummer Night’s Dream, a role to which he less well suited, and which could have easily gone to one of the talented women in the Company.

But my personal tastes aside, Ingram creates a mild and mature Falstaff who carries his end of the plot manfully.

Late in the play we come across the best laughs of the play as Falstaff meets up with Coleman and Bock as Justices Shallow and Silence respectively. But if there were characters and scenes that could have been cut in the interest of the audience’s sore bottoms and sanity, it would have been these.

Bock and Kilgore as Mistress Quickly and Doll Tearsheet (a lady of negotiable virtue) whoop it up with Falstaff and crew at the Boar’s Head Tavern in Eastcheap, London. Kilgore lists “pole work” as a special talent on her Web site, and there are poles aplenty in the Packer Playhouse, but Epstein and movement director Susan Dibble have her swinging high above the audience on ropes in some suggestive and colorful rags instead.

Set designer Travis George has used the Playhouse in new and inventive ways, adding levels and layers to the floor and adding rolling and flying pieces that allow ease of movement from one level to another and double as beds and tables when necessary.

Toomey has choreographed some exciting fight scenes utilizing guns, swords, and fists. Blank cartridges are used and everyone is safe, but if loud gunshots in enclosed spaces bother you, be forewarned.

As he did for Midsummer, Alexander Sovronsky has composed the musical score, designed the soundscape, and acts as Music Director, as well as performing several roles, participating in both the comic horseplay and the combat scenes, and playing a couple of instruments on stage. And he does it all really well too. I am impressed!

Henry IV, Part I and Henry IV, Part II, in their entirety, are still on my Shakespearean Bucket List, but I am glad to finally see some version of them on stage, even if I did stagger out of the theatre with a sore bottom and a headache. If you are a Shakespeare buff, but not a purist as Epsetin takes many liberties with this conflation, this production may be equally satisfying to you, but for the casual theatre-goer it may well prove too much.

* This name is commonly anglicized and pronounced Owen Glendower. Here the last name, by which the character is chiefly known, is pronounced Glin-dur.