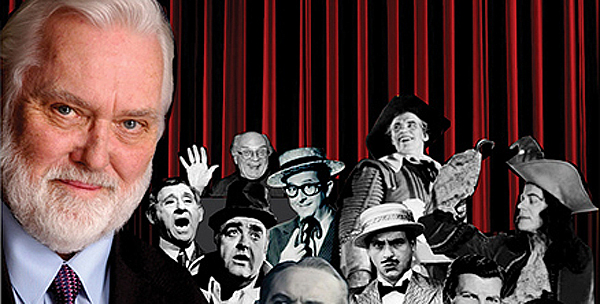 Larry Murray: Character Man at Barrington Stage Company is a wonderfully funny and touching evening of unforgettable theatrical memories. Jim Brochu may not be the first actor to draw on the famous and near-famous he has rubbed shoulders with during a long and rich life to create an evening’s entertainment, but he is certainly one of the best. As he explains at the outset, playing a “character man” means you are an essential part of any play, even though people are not likely to remember your name.

Gail M. Burns: Jack Gilford, Bert Lahr, Lou Jacobi, Zero Mostel, Jack Albertson, Phil Silvers, Charles Nelson Reilly… Indeed, while I recognized many of the names Brochu mentioned – and their faces as they appeared on a screen upstage – I am hard pressed to place his mentor, David Burns (obviously no relation), even though his face was shown at various ages throughout the show. But Burns was Brochu’s dear friend and enabler – his entree into the fascinating and frustrating world of show business.

Larry: For an hour and a half he certainly keeps the Barrington Stage audience spellbound as he rattles off anecdotes and stories about his father, his co-stars, and his beginnings as an orange drink seller in lobbies at intermission. The period he focuses on most effectively is the one in which I was a stage door Johnny myself. But while I was outside with a program and a pen he was running to get corned beef sandwiches from a deli for Cyril Ritchard. Australian stage, screen and television actor, and director. Ritchard is probably best remembered today for his performance as Captain Hook in the Mary Martin musical production of Peter Pan.

Gail: I can just taste that orange drink, Larry. It was watery with strong overtones of cardboard, and it was wildly overpriced, but you HAD to buy one when you went to the theatre in New York. I suspect now that I, like Brochu, could no longer afford one, let alone a Broadway ticket, but the very mention of that beverage brings back memories to anyone who has ever darkened a Manhattan theatre.

Larry: He gets into his family life, and how he almost became the stepson of Joan Crawford, but I was disappointed we didn’t get to learn more about the real person underneath the costumes and makeup. As a seasoned actor who wrote his own autobiographical script, he knows America’s cult of celebrity rarely tires of backstage tales of its favorite actors and singers.

Gail: My favorite story of his was the one about Rex Harrison being rude to a fan at a restaurant – best laugh of the evening, but I won’t give it away here.

Larry: That tale has to be right up there with Winston Churchill’s “Yes, madam, I am drunk. But in the morning I will be sober and you will still be ugly.” People will be repeating it for years to come.

Gail: Brochu punctuates his reminiscences with a series of well-delivered character songs – some familiar like “Mister Cellophane” from Chicago and “If I Were a Rich Man” from Fiddler on the Roof – but others from lesser known shows like Take Me Along and So Long, 174th Street were wonderful gems that I had never heard before.

Larry: Thanks for reminding me Gail, his renditions of songs by all the great songwriters from Jerry Bock to Stephen Sondheim gave the evening a lift every time the theatre tales began to get a bit repetitious. He has a lot to say, but actors are always great at singing for their supper.

Gail: I know Brochu is officially a senior citizen, but he was awfully motionless during the musical numbers. Even Chita Rivera managed to kick up her heels a bit in The Visit this summer, and she’s 81 and was playing a character with a wooden leg! The St.Germain Stage is small and a little choregraphy would have gone a long way.

Larry: Joshua Zecher-Ross was at the piano handling the music direction, and that little piano they use at the St. Germain stage never sounded better.

Gail: I was excited to see Zecher-Ross at Barrington Stage. He is a local boy – his mother was the Rabbi at Hevreh of Southern Berkshire for 22 years – and I have watched him grow as a musical director at the Mac-Haydn and the Cohoes Music Hall locally, although he has worked at many other venues.

Larry: The projections, however, were less than ideal. It appears that they changed their photo displays midstream at the St. Germain Theare. Publicity photos like the one above show three screens brightly lit with sharp images, but opening night there was only one. Many of the images, old and blurry to begin with were hard to make out. The projections looked like a rush job done on a laptop. To make matters worse, spillover glare from the stage lighting sometimes threatened to wash the images out completely. They are integral to Brochu’s story, share the stage with him. Today photo corrections and slide shows are tools that millions of Photoshop and Instagram-savvy users have mastered, so such a gaffe is inexplicable.

Gail: But even when they are blurry, those projections are the key to most people’s enjoyment of this show. You don’t have to be a theatre fanatic like you or me to enjoy this show, because so many of the talented men he references worked extensively on TV and in films as well. You may not recognize their names, but you will recognize their faces.

Brochu does get around, belatedly, to celebrating some of the great character women of the 20th century too, but they are relegated to one number late in the evening, and there are glaring omissions, such as Nancy Walker, Martha Raye, Hattie McDaniel, Marjorie Main, Charlotte Greenwood, Zazu Pitts… Stop me before I use up all the bandwidth on the Internet!

Larry: For anyone who enjoys film and theatre, there are a lot of great stories here about a host of second bananas. The references to Jackie Gleason, Sid Caesar and Steve Allen certainly frame the time period he talks about the most, and his memories of Zero Mostel in Forum and on the street is priceless. My attention never lagged for a second. He was talking about the years I saw several Broadway shows almost every weekend.

Gail: I used to see a show every weekend too, because in those days average people could afford to. Brochu spoke of being able to take the subway in from Brooklyn, buy a seat in The Gods (the back row of the second balcony – so high up that you are closer to heaven than to the stage), and one of those dreadful orange drinks all for under a dollar. In my day it was under $15, which was about what I could earn babysitting each week. My last outing to Broadway cost me over $250 just for two tickets! The teens and young adults who go to the theatre every week these days must be rich enough to buy themselves a Broadway house if they wanted to! It is a whole different world…