“The Addams Family” haunts the Theater Barn with music, mischief 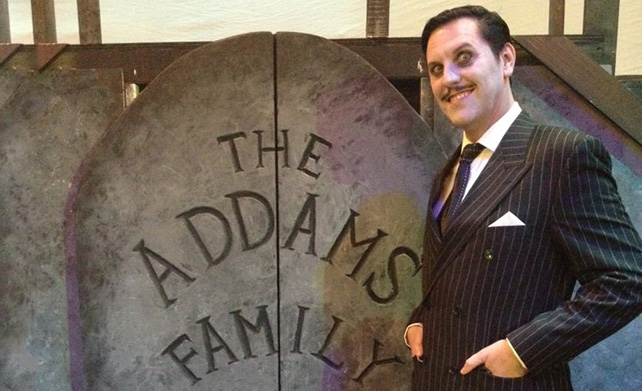 “The Addams Family” haunts the Theater Barn with music, mischief

Larry Murray: The moment you hear the Addams Family Theme Song, you know you are in for fun evening at the Theater Barn. The main reason is that the director Bert Bernardi is back in town and up to no good, taking this critically drubbed musical and giving it a fresh new life in its regional premiere. The Addams Family musical is being performed for the first time in the Capital and Berkshire regions.

Gail M. Burns: I had read some of those dismal reviews the New York production received, and I have to say that I am disappointed if this book and score are what passes for a successful Broadwy musical these days. But as I watched the show I realized that The Addams Family is not about great music and dramatic literature, but instead it’s about nostalgia and the love Americans, especially Baby Boomers like me, have for these characters. A while back someone did a poll asking who TV’s most happily married couple were, and Gomez and Morticia Addams beat Ozzie and Harriet Nelson, Lucy and Ricky Ricardo, Ward and June Cleaver, even George Burns and Gracie Allen! We love these fictional folks and rush for any chance to see them again.

Larry Murray: People in this area look forward to the annual return of Bernardi to the Theater Barn since he has developed a reputation for finding hidden gems and making them into breathtaking productions while staying inside a pauper’s Broadway show budget. Last summer we all enjoyed his hit Young Frankenstein, and he has followed that spooky but hardly scary musical with yet another. The cast sang, danced, and cracked jokes with the best of them, and while much of the material is silly, vaudevillian and sometimes a bit coarse, it was clear the audience was enjoying every morsel these performers dished out. It is among the best work I have ever seen from Bernardi and Theater Barn.

There’s another connection too…The Addams Family composer and lyricist Andrew Lippa is a Theater Barn alum, having toiled in New Lebanon during the summers of 1990 and 1991.

Gail: Not only that, but the three female members of the ancestors chorus – Katrina Gnatek, Caitlin Lester-Sams, and Jerielle Morwitz – are all former leading ladies at the Barn. That shows the love and loyalty artists have to the Barn and to the Phelps family who run it. Joan and Abe just celebrated 75th birthdays, and now a third generation of Phelps, the charming Katelyn Widmer, is handling the welcome speeches. With the cheapest top ticket price in the region – $25 or $23 for Sunday matinees – the Barn has been providing affordable summer fun and a launching pad for young talent for the past 31 years.

With all those iterations, we have seen a lot of people assume the various Addams characters and the audience recognized how special this ensemble was, rewarding them with heartfelt laughter and sustained applause from beginning to end. You can tell when actors are giving 110% to their roles, and it is this abundance of energy that gave this creepy confection such high spirits.

Even the minor roles are superbly cast. Andrew Berlin as anti-avuncular Uncle Fester managed to communicate more through his heavily made up eyes and rubbery posture than through the few grunts and words he is parsimoniously granted in the script. Tall and watchful, he had gravitas as the family’s protector.

As Grandma Lurch, the very attractive Amy Fiebke subsumed her own radiance to play an ancient who seemed to ooze doilies and dust from her every pore. As the mother of the groom and matriarch of the visiting Beineke family, Kimberly Suskind just ran with her role as Alice. She delivered one of the funniest and most endearing performances of anyone in this show as she transformed herself from polite and protective mom to a take-no-prisoners hellion who puts her busband on notice that his cold and bossy personality will not be tolerated anymore.

Gail: Every member of this cast thrilled me except for Victoria Weiberg’s Morticia. I don’t know whether the fault lay in Rick Elice and Marshall Brickman’s book, Bernardi’s direction, or Weinberg’s performance, but that woman on the stage just wasn’t Morticia to me. For one thing, she strode across the stage, arms swinging. Morticia glides, arms folded or close to her sides. I understand why a stage Morticia cannot wear the signature hobble-skirted gown as drawn by Addams – it would literally be deadly – but she should at least move as if she is wearing one. And Morticia’s strength is still and interior, not shrill and noisy. The character just didn’t work for me, despite Weinberg’s obvious talents as a singer.

Larry: The original Morticia, Bebe Neuwirth, and I talked about it during an interview early on, and she related the problems the production was having differentiating itself from the TV version. Those who are looking for a clone of the TV characters will be disappointed, though those who loved the original cartoons will hear many of the captions as quips during the play.

Gail: Actually, Larry, all iterations of the Addams Family are based on the 1964-1966 black-and-white TV series because before that the characters were nameless and Addams’ single panel cartoons provided no through story-line or character development. The producers asked Addams to name the family, and to provide a brief character sketch for each to give the actors something to go on. Addams summed up all his creations in a single paragraph, and after that it was up to John Astin, Carolyn Jones, Jackie Coogan, Ted Cassidy, and the writers and directors of the various episodes to “create” Gomez, Morticia, Uncle Fester, Lurch, et al.

Addams’ second wife wrangled the rights to the family characters away from him during their two year marriage. The creators of the musical were not allowed to base the plot of this show on any of the episodes of the TV series, but they could not help but use the beloved characters established by it.

Larry: It’s hard to pick just one cast member, though it goes without question that everyone probably would agree that 12-year-old Adam Salerno took the minor role of Pugsley and just ran with it. His sister Wednesday (Teresa Whitt) set a new record for Gothic humor and her costume – designed by Jimmy Johansmeyer – was brilliant, right down to its cuffs and spats. But if this was anyone’s show it was Johansmeyer as Gomez, don’t you think?

Gail: I have been a fan of Johansmeyer from the first moment I clapped eyes on him on the Theater Barn stage as Kenickie in Grease back in 1998 when I wrote “He projects an off-beat sexuality which is at once disturbing and hilarious.” If there was ever a man born to play Gomez Addams – after the incomparable John Aston, of course – it is Johansmeyer. Tall, dapper, handsome with a evil gleam in his eyes, he was only upstaged by the glorious costumes he designed.

Johansmeyer and Bernardi are partners in the theatre and out, and their theatrical collaborations are always entertaining. I wish we lived closer to their Pantochino Productions in Milford, CT – I would be a season ticket holder! – but I am delighted with their annual sojourns at the Barn.

Larry: Those looking for a rubber stamp of the television series could be disappointed by its lack of faithfulness to its conventions. The same might be said for those seeking to recapture the wry humor of the original drawings in the New Yorker. But as a musical that takes off in a different direction on some pretty familiar material, and doesn’t forget that today’s audiences like a little potty humor and graphic grotesqueness in their entertainment, The Addams Family is about as much fun as you can have in a theatre these days.

Gail: The Barn was filled with so much stage fog that I thought someone had burned the popcorn at the concession stand when we first entered the lobby and the audience was engaged from the first note of music, snapping their fingers and psyched up for a good ol’s spooky time. Its another terrific Bert Bernardi musical at the Theater Barn, with a terrific cast ready to make up laugh.