Review: Private Eyes at ShakesCo is a befuddling tangle of lovers and cheaters. Or is it… 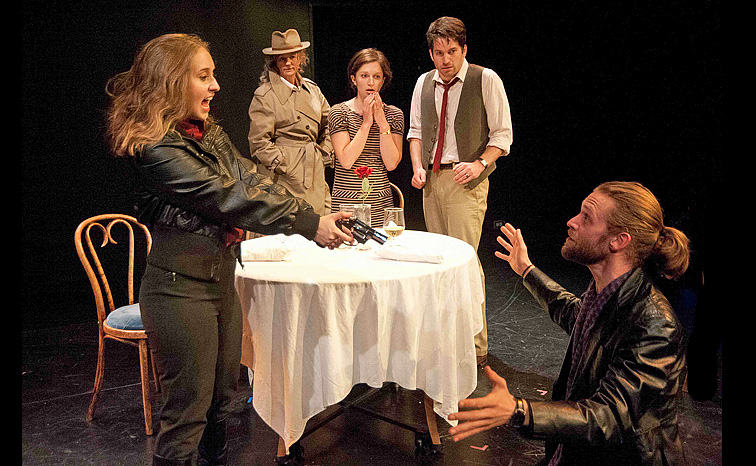 Review: Private Eyes at ShakesCo is a befuddling tangle of lovers and cheaters. Or is it…

Gail M. Burns: I had to be reminded that I had seen and reviewed a production of this play fifteen years ago, also at Shakespeare & Company. Although I liked it at the time, it was not a memorable experience.

Larry Murray: Private Eyes is an odd concoction for sure, with some of the wittiest comedy and clever aphorisms of the current fall season. Written by Steven Dietz, the revival of Private Eyes features a fresh look and much younger cast from when the Company staged it in 1999 at The Mount. There is one rather unmissable change, however, since the therapist Frank played then by Robert D. Lohbauer has had a sex change and is now played by Lori Evans. In your prophetic earlier review (link) you advised audiences to be prepared to go through the looking glass.

Gail: For all its twists and turns, Matthew (Luke Reed) is the central character and whatever happens happens to him, whether in fantasy or reality. Another solid bit of reality here is that Matthew and Lisa (Caroline Calkins) are married, or were married during much of the action of the play. Lisa may, or may not, be having or have had an affair with Adrian (Marcus Kearns), an insufferable British director who has cast the couple in an unnamed romantic comedy. Adrian’s wife ( Elizabeth ‘Lily’ Cardaropoli) may be stalking her erstwhile husband in various disguises, or the whole thing may be a series of semi-fantastic stories Matthew spins for his psychiatrist, Frank (Evans.)

Larry: Jonathan Croy is at work here as the director, which means that when there is fun, it’s rib-splittingly funny and where there is tragedy it fully shocks and dismays. Everything is topsy turvy in this Diet-zy concoction. In the program notes the director says that Private Eyes is a delicate Swiss watch of a play, moving gracefully through time and memory.

Gail: Kearns and Calkins spent the majority of the last year playing the leads in Shakespeare & Company’s Northeast Regional Tour production of Romeo and Juliet. (Review) Reed played Mercutio, among other roles, in that production which Croy directed, and composed its score. So it is no wonder that these three, who form the core cast here, seem so much very much in synch while Cardaropoli and Evans, newcomers to the Company, seem poorly integrated into the whole.

Larry: I came away with less of a feeling of a finely constructed tale of the nineties and more of the impression that Dietz took three unfinished plays, put them through a meat grinder, and fed the information into a computer which reassembled this new, fully integrated version. For the first half hour or so I tried to keep up with the constant shifts of time and reality, but about halfway through I began to believe it was an onion of a play with no real center. The ending is upbeat, but one wonders, given five minutes more, whether we would find that we were just being played with one more time by the author.

Gail: In my earlier review I likened this play to the act of driving a car. You may know that a sharp corner is coming up, or that you want to turn left at the light, but doing so five minutes earlier not only won’t speed your journey, it won’t get you where you’re going at all. Best to sit back, let the road take you where it will, and enjoy the scenery.

Larry: Considering that the entire plot revolves around the question of whether Matthew’s wife Lisa is having an affair with Adrian who in turn is married to Cory reduces the whole theatrical exercise to a series of “what if” variations. This play is likely to appeal to those for whom such sneak-around relationships and their almost always disastrous endings are interesting. Lovers of physics may also find the play layered with the complexities of time and space, but to me all the different dimensions just made this story superficially interesting, but ultimately frustrating.

Gail: Dietz is loved in the regional and community theatre world, and his work is rarely seen in New York City. He teaches at the University of Texas at Austin. I was surprised, on looking over the impressive list of scripts that he has authored, that I have only seen three on stage – his adaptation of Bram Stoker’s Dracula (twice), Private Eyes (twice), and the maddening Nina Variations (thankfully only once!)

Larry: On balance, Shakespeare & Company has rendered a fine production of Private Eyes, a most eminently forgettable play. But the efficiently designed set – which quickly morphs from rehearsal studio to restaurant to office to bedroom – is a lesson in compact cleverness. With swinging set pieces and a few props the story moves fluidly from location to location. In a fantasy sequence, Robyn Warfield, the lighting designer has conspired with the sound designer Iain Fisher to created real magic with an instant disco as two of the actors expire on the floor. If there is one moment to savor and record in your memory banks, this is the money scene.

The costumes by the always reliable Govane Lohbauer were spot on, especially the functional attire for Caroline Calkins which jumped right out of a Fifth Avenue window, and the loose-tie, working man’s outfit for Luke Reed’s Matthew. Even Frank, the shrink, shone brightly as she played the arbiter of truth.The only misfire was the rig they put together for Cory, the detective, which was just a little too slapstick compared to the reality of the other costumes.

Gail: I think this is an odd choice for the Company’s lone autumn offering. If it had been part of their action-packed summer season I think it would have found its audience, but I worry that there is less variety among fall theatre-goers and that this light-weight relationship drama won’t appeal.