Review: “On the Town” is the hottest musical on Broadway 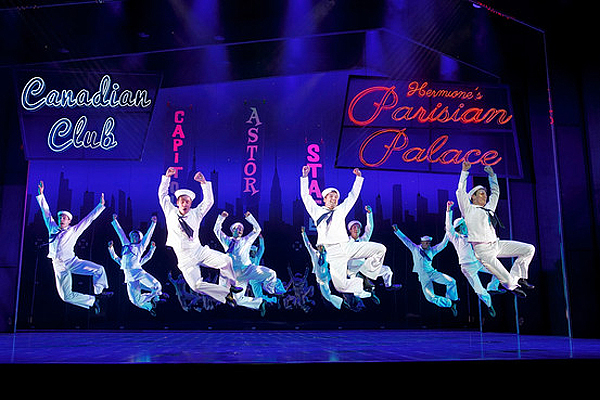 Review: “On the Town” is the hottest musical on Broadway

No show celebrates New York like this one, so it looks like it’s going to be “Fleet Week” for as long as On the Town is docked at the Lyric Theatre. Broadway has needed this energy boost for a long time – On the Town is nothing less than the biggest, brightest and brassiest musical to open in years.

Surprises begin when you discover that this is a musical without an overture, beginning insead with a brilliantly lit U.S. flag and a heartfelt orchestral rendition of “The Star Spangled Banner,” with the audience joining in.

Being a huge production, some have worried that there are no big name actors to sell tickets. But there are some real stars at work here, essentially three couples comprised of six actor-singer-dancers, and it won’t be long before each becomes a household name in their own right.

This 1944 musical is 70 years old, but who cares when it has been born again with the energy and optimism of a young America at its core. As its audiences built during previews, jaded “seen-it-all” New Yorkers have welcomed this authentic musical back to Broadway. Audiences have added their nightly whoops and cheers as a cavalcade of bedazzled visitors finally find the fabled New York City they have come to see right there, on stage.

Visiting New York soon and picking a show? Now it’s a simple choice. You have not seen the real New York until you have seen On the Town.

This fresh new version firmly places it in the top tier of American musicals, partly because of its colorful Leonard Bernstein score, but also because of the incredible book and lyrics by Betty Comden and Adolph Green. While sometimes dismissed as a cornball concoction of Broadway tidbits, it is actually a learners guide to how a great musical is crafted. It was one of the first musicals to make sure that every word and lyric was advancing the plot and characters of this wonderfully complex tale.

It begins at dawn, as we meet three sailors flying down the gangway as day breaks for 24 hours at liberty. They hope to see the sights and in the process find three dates before getting shipped off to war. This sets up lots of possibilities for wacky, even goofy humor, and director John Rando has found a way to make these twists and turns total fun. The cast throws itself into the slapstick aspects, while adding subtle modern twists that make it all feel fresh and new.

But what really makes this musical special is that in addition to the basic elements of musical comedy, it has its roots in ballet. From the first moment the nautical trio appear on stage singing “New York, New York,” they begin dancing. The choregography of Joshua Bergassse pays homage to the great Jerome Robbins, but then sets out on its own to fill the stage with daring spins, lifts and jetés that introduce many in the audience to the language of the classics, albeit made new for this show.

And this is the secret of On the Town. As with Bernstein, Comden and Green before them, Rando, Bergassse and the entire cast is not afraid to mix glorious passages of high art with rib tickling low comedy. We are dazzled by the high, then slain by the low. Rando unabashedly milks the musical for every ounce of humor he can find in it, while Bergasse doesn’t miss a single opportunity to ratchet up the dancers another notch, as in the “Lonely Town” pas de deux. This spectacular concoction is like some weird particle in physics, it has all the elements to take us up and down the entertainment spectrum, bumping into characters strange and charming, while covering the city from top (The Bronx) to bottom (The Bowery).

The cast has no one star, but rather an ensemble of them, the three sailors and their girls, plus half a dozen other well-drawn characters.

The linchpins of On the Town consist of Gabey the gob (triple-threat Tony Yazbeck) and Ivy -also known as Miss Turnstiles – (Morgan Fairchild, imported from the New York City Ballet). From the moment Gabe first spies her on a poster in the subway it is love at first sight. Of course Ivy’s life is not quite the one depicted in its captions but it sets the plot in motion. In his search for Ivy, Gabey visits Carnegie Hall where a drunken, exploitive Maude P. Dilly (deliciously portrayed by the scenery chewing Jackie Hoffman) does her best to keep the pair apart.

In the Act I finale, Yazbeck breaks our heart with “Lucky to be me” and the company brings the curtain down with the “Times Square Ballet.”

Later, Yazbeck’s pas de deux with Fairchild in Act II sends us soaring in “The Great Lover Displays Himself” which is often omitted from other productions because of the dance requirements, but serves the essential purpose as On the Town‘s steamy, searing dance to the possiblities of love.

Chip, the home-grown farmboy sailor (a rubbery Jay Armstrong Johnson) has his heart set on seeing every attraction in Manhattan that his father told him about as he grew up. Guidebook in hand, he is the driving force propelling the three swabbies on their big city adventure. He soon meets Hildy (an amazingly aggressive Aysha Umphress) who determines to bed him (“Come up to My Place”). She’s a taxi driver and she takes him on a full throttle whiz-by of all the sites he has his heart set on, finally luring him up to her apartment (“I Can Cook, Too”). But she is not alone as Chip discovers when he meets her roommate Lucy Schmeeler (a hilarious Allison Guinn).

Throughout the show, Chip is always the cut-up of the trio, and his comic abilities, especially when paired with the brilliant Umphress, is a joy to watch. When the two are doing their roller coaster ride of a city tour, Chip is constantly in motion, doing backflips, hanging on for dear life, bell bottoms fluttering behind him as Umphress takes him on a joy ride that will go down in my memory banks as some of the funniest, groundbreaking slapstick comedy I have ever witnessed on stage. Just wait until the late night talk show hosts discover OTT’s playful cast, especially this pair of clowns who can also sing and dance like a dream.

Finally, there is the tender tar Ozzie (a hardworking Clyde Alves) who convinces Chip that he should scrap his sightseeing plans and instead make it their duty to find Miss Turnstiles for Gabey. Ozzie finds himself at the American Museum of Natural History and is soon in the clutches of Claire de Loone (an irrepressible Elizabeth Stanley) as they deliver the show-stopping “Do Do Re Do”. Turns out that Claire is engaged to be married to an older gentleman, Judge Pitkin (a rock steady Michael Rupert) whose main job is to sing “I Understand”.

At least until he doesn’t when the nightclub bills pile up and Claire keeps abandoning her future husband for the sailor. While Gabey is off on his own search, the two couples (Alves and Stanley, Johnson and Umpress) shine in the syncopated “Ya Got Me”. Things turn a bit darker as dawn approaches and the reality of war re-enters their budding romances as the quartet turns to the darker “Some Other Time.”

On the Town‘s Berkshire connection is strong, too. All musicals have complex histories, and this one is no exception. This refreshingly original reprise of a classic musical began its new life in a City Center concert version where Tony Yazbeck wowed the listeners with his voice and presence, and John Rando began to tip his hand as to what he had in mind for a new production. Soon Barrington Stage Company Artistic Director Julianne Boyd and her board paved the way for a full production which turned out to be the sensation of the 2013 summer theatre season here. And now comes this, the final iteration, bringing audiences to their feet in the largest theatre on Broadway.

The Lyric Theatre (formerly the Foxwoods where Spider Man: Turn off the Dark played) is a rather large palace of a place, holding three times as many people as the Boyd-Quinson stage in Pittsfield where it originated. The orchestra has been more than doubled to 28 pieces, the largest currently employed on Broadway. The scenery and projection design -which is state of the art and very glossy – was carried out by Beowulf Boritt, expanding on his original vision at Barrington Stage.

The size of the company has increased as well, and as at Barrington Stage, elements of the production are brought out into the aisles to help embrace the audience. During “Lonely Town,” the living subwoofer Phillip Boyken – who opens the show with the rumbling notes of “I Feel Like I am Not Out of Bed Yet” – was singing directly next to my seat, which shook as he delivered the lowest note I have ever heard in my life. And even if the Lyric is a very large house, the seats are remarkably comfortable the sightlines superb, and the lighting so well designed by Jason Lyons that everything – even the smallest bit of stage business – reads exceptionally well, making the miniature army of tiny details Rando has incorporated visible to all.

Watching On the Town grow from a fabulous Barrington Stage Company (BSC) musical into what can only be described as a theatrical armada has been breathtaking. BSC – at only 20 years of age – has taken its place among Berkshire theatre companies as the one to plan your fall, spring and summer around. On the Town deserves all the high fives, bumped knuckles and bravos it is receiving today. It’s the first musical to open the new Broadway season, but is it really too early to think about another Tony to grace the Barrington mantle? One might reasonably entertain the thought.

Just one final note of recognition to producers Howard and Janet Kagen and their colleagues – they earn kudos, too, for seeing the potential the Berkshire On The Town offered to Broadway, and then running with it. They have helped make this great old musical all new and shiny again.

On the Town is a show the whole world deserves to see.