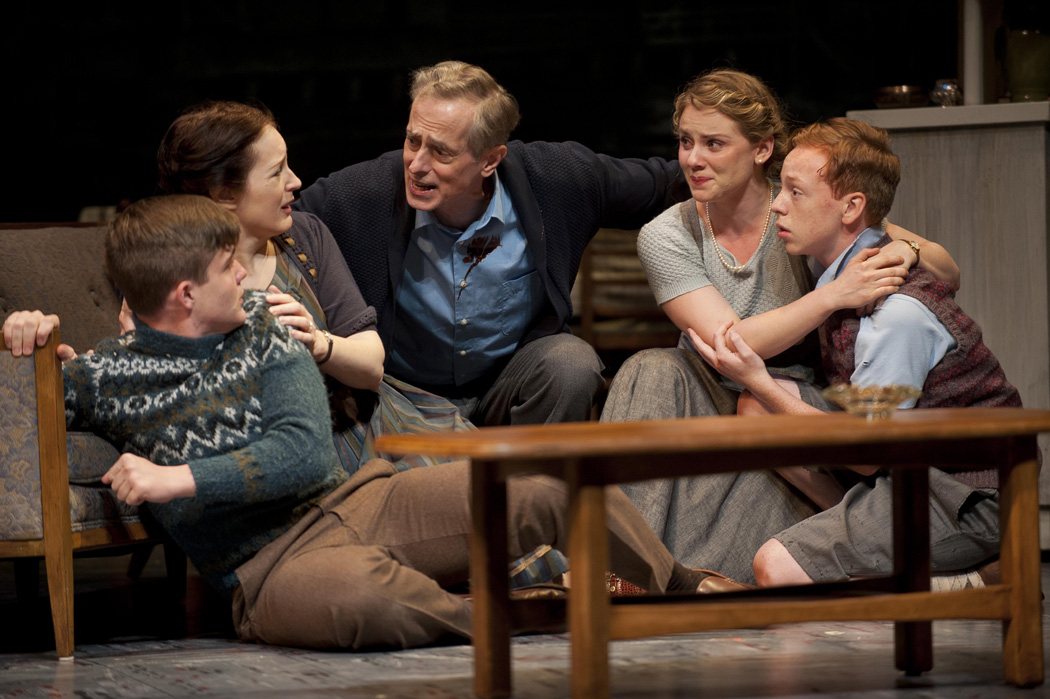 An Enemy of the People at Barrington Stage Company
Theatre Review by Gail M. Burns and Larry Murray

Gail M. Burns: Tragically, An Enemy of the People, a tale of the battle between the truth and those who would manipulate or stifle it for their own gain, is as relevant today as when Henrik Ibsen penned En folkefiende in 1882 in response to the public attacks on his play Ghosts, and in 1950 when Arthur Miller adapted it as a response to the actions of the House Un-American Activities Committee headed by Senator Joseph McCarthy. It is all too easy to draw parallels to the key concerns of today

Larry Murray: I agree, Gail, and rarely do we see theatre productions that so perfectly capture the temper of our times from a distance of 65 or 130 years. I think a large part of the reason that An Enemy of the People works so well is the excellence of every aspect of the BSC production. Director Julianne Boyd has been doing these issue plays for many years now, and has yet to have one that has misfired. Her sense of historical importance combines with some pretty innovative direction to bring a big, long, grey play like this into sharp focus. The fourteen actors – drawn as much from this region as from New York – are uniformly superb.

Gail: The plot is painfully simple. In a town struggling to revive its economy after the Second World War, much money and many hopes have been pinned on the healing spa waters of Kirsten Springs and a new resort has been developed to capture the tourist market. The local doctor, Thomas Stockmann (Steve Hendrickson), concerned over a rash of illness among the Springs early patrons, has had the water analyzed and discovered that it is, in fact, contaminated by the run-off from the tannery up stream – a business that has been in his wife’s family for generations and is currently owned by his ecentric father-in-law, Morten Kiil (Glenn Barrett). Dr. Stockmann’s brother, Peter (Patrick Husted), is the Mayor, and they both sit on the board of directors of the resort. Dr. Stockmann has a happy family life with his wife Catherine (Dee Nelson), 20-something daughter Petra (Katya Stepanov), and two school-age sons Morten (Noah Bailey) and Ejlif (Joey Labrasca). They are well liked in the community and in the first scene the family is entertaining Aslaksen (Jack Wetherall), the publisher of the local paper, its young editor Hovstad (Scott Drummond, and his assistant, Billing (Christopher Hirsh), along with an elderly neighbor, Captain Horster (Don Paul Shannon), at dinner when the water analysis report arrives from the lab.

At first everyone hails Dr. Stockmann as a hero for catching this important information on time. But as the economic impact of this discovery becomes clear – the Mayor goes about making that impact starkly real to all concerned – the worm turns and by the opening of the second act Dr. Stockmann is not even allowed to speak at a public meeting he has called, held in the Captain’s home because no one in town will rent him a hall. Stockmann is officially declared An Enemy of the People, and the play concludes with he and his family sheltering behind their living room couch as a mob roars outside their home and hurls rocks through their windows, determined to stick together and fight for the truth.

Larry: The tension that built during the opening of the second act where the point of the play all melds together, builds the excitement of the citizens into a frenzy, and you can feel it build all around you as the ensemble brings the action of the mob into the midst of the audience. It is a passionately breathtaking example of full-tilt theatrical magic at work. And it t has to be the most memorable fifteen minutes of theatre I have seen this year. It’s an all-out assault on the truth by the classic powers-that-be which is at the heart of this great human story.

Gail: As usual, we were seated in different parts of the theatre, and from where I was sitting I could clearly see how in the second act opening Boyd used just three actors – Rosalind Cramer, Brian Lichter, and Tony Pallone – along with Brad Berridge’s seamless sound design, to create the illusion of an angry mob; while David M. Barber’s set pushed the on stage action far downstage. I agree with you, it was thrilling

Larry: As the truth-telling Dr Thomas Stockman, Hendrickson set the stage afire with his passion for the facts, his desire to see justice done, and the safety of his family. His eyes blaze, his arms beg us to embrace the truth and his heart breaks as friends and family succumb to deceit and treachery in order to cover up the news that the water for a spa is contaminated and has been making people sick. As his wife Catherine, Dee Nelson served as the anchor to her husband’s desire to share the truth, shoring him up when needed, but never failing to remind him of the repercussions on his family for being a whistle-blower.

Gail: Stepanov also gave a fiery performance as the young Petra. While Catherine is very much the dutiful and subordinate 1950’s housewife, Petra is an educated and liberated young woman. I was glad that Ibsen and Miller burdened this character with neither romance nor violence in the course of the story.

Larry: Perhaps the toughest role was that of the Mayor Peter Stockmann (Patrick Husted). I was delighted when he was politely booed at the curtain call, and graciously acknowledged the audience’s ironic approbation with a smile and warm gesture of appreciation.

Gail: If I have one quibble with this electrifying play, it is that Ibsen and Miller have made things too black and white. The Mayor is clearly the villain and the doctor is clearly the hero. If this tale was to be told today, I think we would see more sides to the different characters, their values and motives.

Larry: Barber’s morphing set and Sara jean Tosetti’s simple costumes read realistically, the sounds of a solo Cello punctuated the beginning of each scene with foreboding.

Gail: Mid-century Modern or Scandanavian Modern is all the rage these days. I am sure there were many hipster homeowners coveting the furnishing in the Stockmanns’ home. Barber also used a cool palette of whites, greys, and taupes in the set which reinforced the idea of the play being set in a cold, northern land, as well as lending a air of bloodless sterility to the mounting horror.

Larry: I loved the formal iciness of the setting and the many threats that were made to try to shut the fiery Doctor up. Evil is so often stated quietly, sotto voce, so that it takes a few seconds to sink in.

As we drove back you commented on how many ideas were contained in just this one play. They could fuel interesting discussions for some time. Suffice to say that An Enemy of the People gets a superlative rendering on the Boyd-Quinson Mainstage of BSC. Without hesitation I recommend it to our readers – for no matter where their politics lie, pretty much everyone seeks the truth. An Enemy of the People is simply the most exciting, thought-provoking and important play of the 2014 Berkshire theatre season.

Gail: I completely agree, Larry. Barrington Stage is offering some talk-backs and sessions with people involved in local issues of water quality, like GE’s PCB clean-ups in the Housatonic and Hudson Rivers and the effort in North County to restore the Hoosic River as a corridor for recreation and transportation, but I see stronger parallels with breaking news that National Grid will be hiking our winter electric rates by an alarming percent because local communities have, so far, prevented a natural gas pipeline from being built.

But whatever your political and/or environmental bent, everyone will find characters and issues in this play to connect with and think about. I am delighted that there are school matinees scheduled because this is just the kind of drama that can galvanize young people out of apathy and into action.