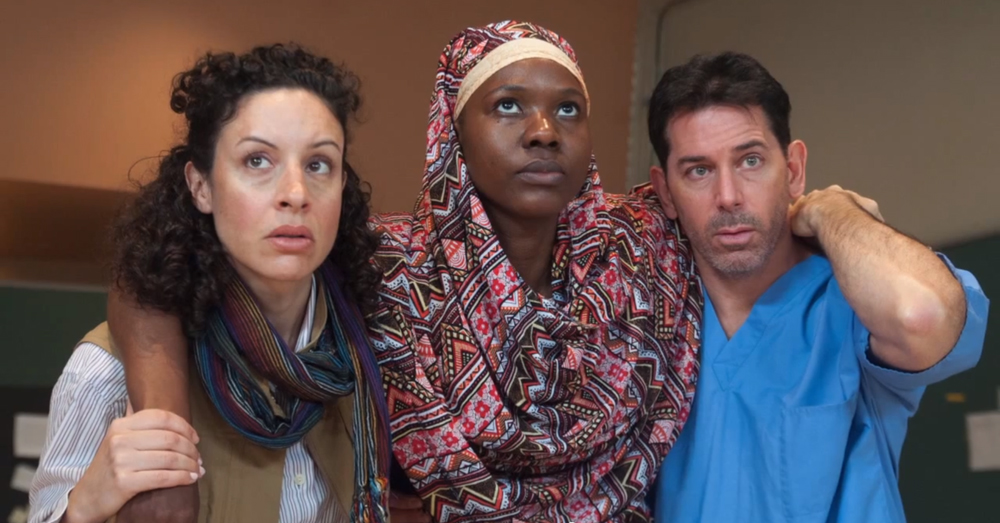 That genocide exists in our modern civilization is almost unfathomable. Isn’t mankind better than this?

From the comfort of our homes we find it difficult to grasp how the human mind can justify the killing of thousands of others just because they are different. How can people’s capacity for compassion be so often overwhelmed by a hatred of the “other” – those of a different religion, nationality. or just some poor folks who are taking up too much space on land you covet.

WAM Theatre, which is located in the bucolic Berkshires of Massachusetts, chose Winter Miller’s difficult play IN DARFUR for its fifth season offering, and which is currently being performed in the Berry Family Studio at the Elayne P. Bernstein Center at Shakespeare and Company until November 16. Brilliantly staged by Kristen van Ginhoven, it is an immersive theatrical experience that begins long before you enter the playing space itself: the hallways themselves are lined with fencing, signage and the accumulated rubbish of a hastily organized refugee camp.

For the New England premiere of this dark and searing IN DARFUR, the audience is seated on two sides of a diagonal gash that runs from one corner of the playing space to the entrance. The audience itself is seated within the camp which extends to all four walls themselves, an effect created with projected images of endless tents pitched upon a dry desert. As witnesses to the painful conflicts that unfold, the audience becomes drawn into the story. Once there one’s mind is so taken with the pain and suffering that the bottom-line cause of this particular genocide is almost secondary, but for the record it was climate change and a reduction in annual rainfall that began the ball rolling.

Most of the play’s violence unfolds inside this bloody gash but the performers themselves – refugees, soldiers and observers – constantly traverse the spaces between the audience members, bringing us into the story in a compelling, even frightening way. It’s not relaxing to have angry soldiers with guns running by you constantly.

The story that unfolds is mainly centered on Hawa (Sipiwe Moyo), an English speaking Darfuri who has just seen her family killed, been raped and is on the run. In a brilliant and exquisitely controlled performance, Moyo makes us part of the fear she feels as she runs from the Janjaweed militia. The brutal and poorly educated warriors consist of Arabs armed by the Sudanese government to drive the native Sudanese from their land. In their irnorant madness tinged with religion, they also believe that Hawa is guilty of adultery and want to punish her for her rape.

In 2003-4 when this play takes place, some 700,000 were driven from their homes, brutalized, starved and beaten. A decade later millions of survivors reman displaced.

“Two months ago my entire family tree was chopped down. But I am still here. I ask myself why?” – Hawa

IN DARFUR may revolve around Hawa, but also key to the story are Argentinian doctor Carlos (Rich Lounello), who is working with the Humanitarian Aid Commission and the reporter, Maryke (Tricia Alexandro) who is determined to break the story of the genocide and displacement in the New York Times so the world knows what is happening. To her, only international exposure can generate enough pressure to get the world to react. Her conumdrum is whether to reveal the name and source of her key victim, thereby endangering Hawa.

Plays about genocide are not as rare as one might think, it is a subject well covered in theatrical literature, with provocative plays that have explored the Rwandan, Bosnian, Cambodian, and Armenian massacres on stage. And of course who is not familiar with THE DIARY OF ANNE FRANK and BENT two of many plays about the holocaust. What is difficult to relate in all these genocide plays is the immensity and scale of the horrors. So playwrights such as Winter Miller turn to a single tale as the fulcrum upon which their story rests.

In actor Sipiwe Moyo, this production has found an actor whose physical portrayal is even more powerful than her spoken one. Indeed, when the Doctor Carlos is punched and doubled over by brutal soldiers, the play surrenders to its visceral elements to explain the fear and intimidation wrought by the government turning one half of the population on to the other, all in the pursuit of more money, of course.

Winter Miller herself worked at the New York Times for op-ed columnist Nicholas Kristof, and in writing the parts of reporter Maryke and editor Jan (Christina Gordon) she was not kind. Perhaps it was the pressures and stresses of newspaper life but the battle to come up with a story was as heartless and brutal as the soldiers running around with automatic weapons and beating up whoever was nearest to them. In my long experience I have never met reporters or editors as coldhearted as those played by Alexandro and Gordon. All of the characters seemed to be acting out of self-preservation, which has to be the primary mission of anyone caught in a war zone. The polite niceties of normal human interactions become pointless, and time and again the production swept away any moments of softness that might intrude.

In the end, all the characters we meet IN DARFUR seemed to live moment to moment, with one exception, Hamida (Shannon Harris) who was the most human, most compassionate of all those we met. Yet at the end, she is abandoned and left to fend for herself by even Hawa.

There has been a consistent fearlessness from WAM Theatre in selecting its plays, yet it is impossible to stereotype the company. IN DARFUR is the blackest of the plays they have chosen to date, and also the one that leaves the most questions unanswered.But how can we expect 90 minutes in a theatre to adequately explain this heartless and horriying failing of humans, especially since genocide is something that has been going on for millennia?

As usual, this sharp and incisive production of a topical subject brings to the surface many facets of human nature that we prefer not to think about.

It should be noted that 25% of the box office proceeds will be donated to the Mother of Peace Illovo orphanage in South Africa where 13 woman have dedicated their lives to raising children who have lost their families.

This review by Berkshire on Stage editor Larry Murray originally appeared in Broadway World on November 3, 2014.