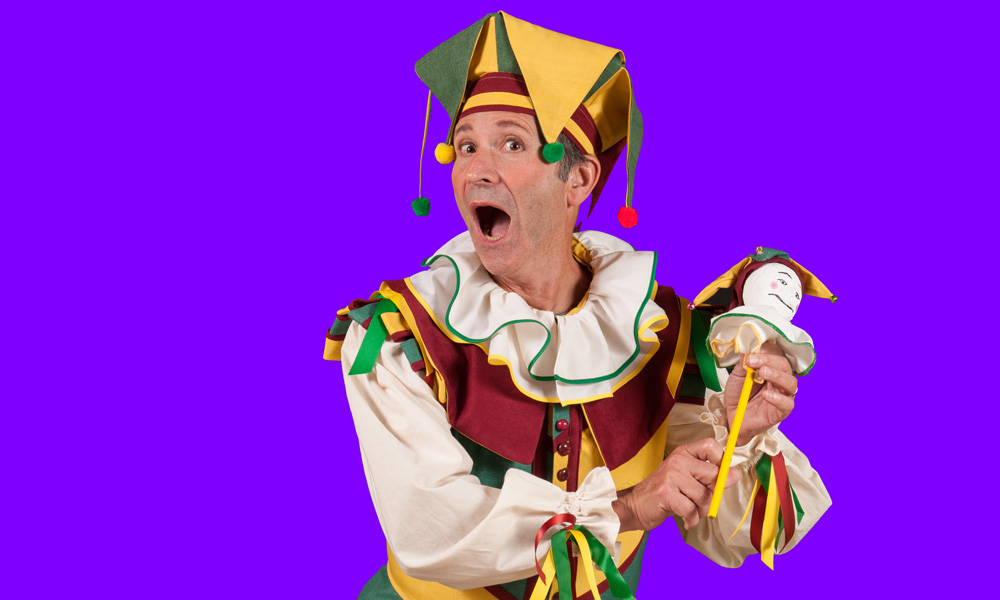 Dame Carruthers (housekeeper to the Tower) and a somewhat reluctant Sergeant Meryll (of the Yeomen of the Guard), played by Kathy Blaisdell and John Healy.

Colonel Fairfax (under sentence of death) and Elsie Maynard (a strolling singer), played by Jonathan Evans and Elaine Crane.

For the past forty years, Valley Light Opera has brought Gilbert & Sullivan – or occasionally another well-loved operetta, but mostly Gilbert & Sullivan – to the Pioneer Valley. They mount fully staged productions with a full orchestra, costumes, lights, wigs, the whole nine yards – all with volunteer labor, giving people of all ages and interests an opportunity to be involved with some of the most delightful light opera ever written.

I fully believe that Gilbert & Sullivan should be a community effort, for and by and with everyone who wants to be a part of it all, and I am appalled to find myself living in a community that has no such tradition. That is why I pack my many Savoyard friends into my largest available vehicle and traverse the hilltowns to see the annual VLO production. This year they have mounted a handsome production of the seldom-seen Yeomen of the Guard, directed by Jacqueline Haney and conducted by Aldo Fabrizi.

Set on the grounds of the Tower of London – Haney has moved the action nearly a century, from 1513-1520* to 1603 – Yeomen is considered Gilbert & Sullivan’s “serious” work. It is certainly 50% less silly than, oh, say Pirates or Iolanthe, but there is still fun to be had, chiefly in Act II. Act I, while it contains one of the duo’s most popular numbers “I Have a Song to Sing-O,” is heavy on the mechanics of plot and exposition.

As the curtain rises, young Phoebe Meryll (Kate Saik), whose father is a Sergeant (John Healy) in the Yeomen of the Guard, is pining away because the young, brave and handsome Colonel Fairfax (Jonathan Evans) is imprisoned in the Tower and condemned to be beheaded upon the hour for the crime of sorcery, unjustly accused by his cousin Pontwhistle who stands to inherit the Colonel’s estate upon his death. Fairfax asks Sir Richard Cholmondeley* (Jeff Erb), Lieutenant of the Tower, to find him a woman willing to marry him before he dies so that his cousin can be cheated out of his inheritance. At that moment Jack Point (Jonathan Klate), a strolling jester, arrives with his merry maid, Elsie Maynard (Elaine Crane). Cholmondeley quickly learns that Elsie’s mother is ill, and easily convinces her to marry Fairfax in order to be able to buy her mother the medical care she needs. Jack Point, who is in love with Elsie and hopes to marry her himself, reluctantly agrees to the scheme too.

Meanwhile Sergeant Meryll, Phoebe, and Fairfax hatch a plan to enable to Fairfax to escape disguised as the Sergeant’s son Leonard (Phil Helzer) who is supposed to arrive that day to join the Yeomen. Phoebe easily snags the keys to Fairfax’ cell from her besotted suitor, the Head Gaoler and Assistant Tormentor, Wilfred Shadbolt (Michael Budnick), and the escape is effected. When the headsman arrives and the guards go to fetch Fairfax, the cell is empty, (although Fairfax is actually front and center on Tower Green, singing in the Yeomen chorus). Elsie and Jack Point are horrified that, instead of being a wealthy widow as promised, she is the bride of a fugitive whose face she has never seen and he is short a fiancee and singing partner.

Will Fairfax be found out or will he get away with his disguise? Will he woo his wife, Elsie, or the persistent Pheobe, who has been commended to her “brother’s” care? And if he chooses Elsie, what becomes of poor Jack Point? Will Shadbolt be hanged for failure to keep Fairfax under lock and key? And what of Dame Carruthers (Kathy Blaisdell), the dour Tower Housekeeper, who secretly pines for Sergeant Meryll? These and many other questions are wrapped up in the course of Act II, while the choruses of Yeomen and London citizens comment musically on the proceedings.

When producing Gilbert & Sullivan on a community level, you generally have to pick between performers who can sing, and those who can act. Overall, Haney has gone with singers, which is a good choice in a large venue like the Academy of Music Theatre. Her few double threats therefore stand out clearly. Budnick as Shadbolt is a delightful clown with a rich, full bass-baritone voice. Haney has reinserted “When jealous torments rack my soul,” a comic number for Shadbolt which Gilbert cut in rehearsals, early in Act I, which is a nice treat.

Healy and Blaisdell have to wait until late in Act II for their moment, but they shine in their comic duet “Rapture, Rapture,” which I confess to liking better than “There is Beauty in the Bellow of the Blast,” a similar duet for a quailing gentleman forced to propose to a bloodthirsty post-menopausal maiden in The Mikado.

Klate and Crane are VLO stalwarts, used to assaying the character man and leading lady respectively, and they disport themselves with professionalism. Crane has a lovely soprano and brings a real pathos to the role of Elsie.

Saik is a saucy and pleasing Phoebe, and, in the tiny solo role of Dame Carruthers’ niece Kate, Nicole Newell, acquits herself well.

Ted Fijal’s set is handsome but crowded, forcing the action far downstage and making it impossible to include any choreography in scenes where the full cast is on stage. Michael Friedman has executed a fine lighting design, especially in Act II which is set on a moonlit night.

Elaine Walker and Laura Green have designed a passel of sumptuous costumes for leads and chorus alike. It was a lovely touch having costumed members of the Yeomen chorus standing outside the Academy of Music as the audience entered. They were clearly visible from the busy intersection of Routes 9, 10, and 66 in downtown Northampton, beneath the moving lighted marquee on the front of the theatre proclaiming “VLO presents Yeomen of the Guard,” forming a fine living advertisement for the production.

Yeomen… – the eleventh of their fourteen collaborations – comes late in the Gilbert & Sullivan canon. By then their company of players at the Savoy Theatre, under the ownership of Richard D’Oyly Carte, was well established and starting to get jealous and territorial. In reaction, Gilbert & Sullivan create more named roles, spreading the plum solos around so that no one could claim to be the “star.” This sharing of the wealth is only detrimental to the character man. Jack Point barely gets enough stage time to build sufficient sympathy with the audience to render his ultimate collapse as poignant as it should be. Does he die? If he does that lifts Yeomen… into the realm of grand opera rather than operetta. If he merely swoons, are we left with a “comic” opera or not?

Sullivan, six years Gilbert’s junior, was hailed by the arts media of the day as the Saviour of English Classical Music. It was hoped that he would lift British Opera on to a par with Italian and German works, and so there was much public lamenting that he wasted his talents on these silly, but lucrative and very popular, collaborations with Gilbert. Sullivan bought into this line of thinking, and viewed the Savoy Operas as a waste of his time and talent. He did indeed write grand opera, but those works are seldom performed today while his collaborations with Gilbert have never been out of favor (in fact, The Mikado is one of the most frequently performed works in the history of musical theatre). So Sullivan was constantly pressuring Gilbert to write more serious libretti. By the time they embarked on the creation of Yeomen… in 1888 tensions were running high between the two, and this far more serious and poignant piece pleased Sullivan and the press greatly. Gilbert liked it too, in fact both he and Sullivan considered it their best work together. While they had one more big hit with Gondoliers in 1889, their relationship deteriorated and their last two collaborations – Utopia Limited (1893) and The Grand Duke (1896) – were flops.

I was blessed with the opportunity of seeing all 13 extant Gilbert & Sullivan operettas at the now sadly defunct Light Opera of Manhattan (LOOM) before I turned 20. VLO has presented that same gift (including productions of the team’s “lost” first collaboration, Thespis) to this region, along with productions of many of Gilbert and Sullivan’s works in collaboration with other composers and librettists. For November 2015 they have announced a production of Lerner and Loewe’s Brigadoon. I love American musical theatre, but there are so many opportunities to be involved in productions of that genre. Productions of operetta, without which American musical theatre would not exist, are dwindling. I hope that, after their sojourn in the highlands, VLO will return to Gilbert’s Topsy-Turvydom.

* A gentleman named Richard Cholmondeley was the Lieutenant of the Tower from 1513-1520, hence the assumption that Gilbert set the action in that period.