“The Gift” – Race, religion and science clash in St. Heaven at Provincetown Theater 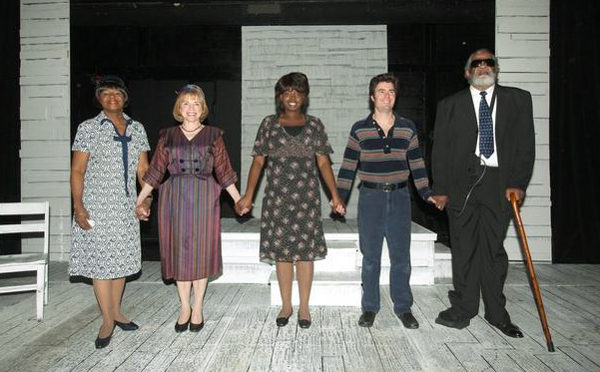 “The Gift” – Race, religion and science clash in St. Heaven at Provincetown Theater

In a town known for showcasing original work by emerging playwrights, The Provincetown Theater’s world premiere of Steve Lyon’s The Gift far from disappoints.

Playing through Sunday, April 5, 2015 the two-act play is set during the 1960s in St. Heaven, a fictional, once robust community at the foothills of Appalachia. Outer Cape audiences are no strangers to the nuances of small-town living, and while the story is set in another time and culture, the dynamics of living close to your neighbor will feel familiar.

Their ensuing clandestine romance causes a series of events that challenge the role of race, religion and science in St. Heaven — issues that make the play relevant for contemporary audiences in small and big towns alike.

Is Eshie’s gift of tongues a gift from God or something else? Can a traditional black preacher and a long-suffering white widow stop fighting over their young charges? To what lengths will they go to maintain their own beliefs and sense of right and wrong? These universal questions keep the audience engaged throughout The Gift.

Directed by the critically acclaimed David Drake (The Night Larry Kramer Kissed Me), the greatest strength of the production is Drake’s deft casting and production team, including Margaret Van Sant as associate director. By creating a tight ensemble of Provincetown actors, Drake pulls out some of their best performances to date.

Jackett takes risks with a character that is rich in its moral complexity. Calixte, seen most recently in last summer’s Peregrine Theatre Ensemble production of Rent, confronts her disparate loyalties with grace. Virgie Riddle, the doctor’s widowed mother, sensitively portrayed by Jane MacDonald, struggles to understand her son’s actions. Sallie Tighe as Millie Moses, the Riddles’ hired help, is marvelous in her comedic timing, adding levity to a play weighted with the age-old struggle of science versus religion.

Actor Jimi Little is commanding in his role as the controlling pastor Joe Bertram. Acting like a father to the once-impoverished Eshe, his investment in her future is both redeeming and scary in its zeal.

The set design by Tristan DeVincenzo is sparse in the experimental black box style. Rough, wooden exterior walls are echoed in the simple set and props, which move from scene to scene by the actors themselves. The transitions are smooth and strengthen the flow of the play.

Movement choreographed by Bart Murell uses the stepped stage environment to create intimate tableaus. Carol Sherry’s costuming adds to the class distinctions of the characters with the vintage flair that Sherry is known for. The frequency of costume changes is well timed by stage manager Bretten Burger.

Lighting choices by Chris Page support the production’s starkness, almost to a fault. Act One opens with the extraordinary voice of Calixte singing in the dark, making the audience impatient to see her. In other scenes, such as in the secret meetings of the lovers, Page’s lighting decisions are spot on. Drake’s sound design, filled with beautiful old gospels and flawlessly run by sound technician Alexander Papetsas, is seamless and professional, a treat in a dialogue-driven play.
Produced by Lora Papetsas’s new Loramers Productions, The Gift is her passionate return to the theater after 25 years as a restaurateur. Her large group of supporters, including associate producer and Lyons’ partner Peter Demers, adds to the testament that a good play has many people behind the scenes.

This wonderful production is a feather in the cap of The Provincetown Theater. Don’t miss it.

This review originally appeared in the Provincetown Banner on March 25, 2015