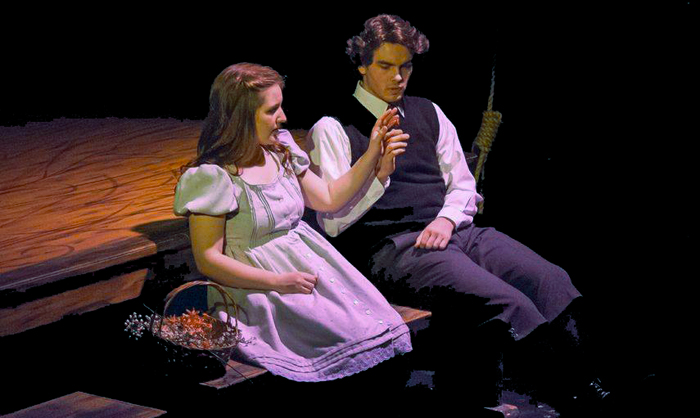 (L to R) Lucas Phayre-Gonzalez (Melchior) supported by the cast

All Photos by Tamara Hansen

Larry Murray: With book and lyrics by Steven Sater and music by Duncan Sheik, the 2006 Tony Award-winning alternative rock musical Spring Awakening is now playing at Sage College in Troy, New York at the audience-friendly Meader Little Theatre. Last performance April 26. I am putting all this information up front because this review is more of a “must see” reader advisory: this production with its youthful cast is directed by Leigh Strimbeck and utilizes a functional and ingenious set by Juliana Haubrich.

Gail M. Burns: The Theatre Institute at Sage is a great company that is doing some really great theatre. TIS is only five years old, but it is carrying on the tradition established on its campus by the now defunct New York State Theatre Institute, which utilized Sage facilities, faculty and students to provide quality theatre for schools and the general public from 1974-2010. The connection with Sage was NYSTI’s greatest asset, and in turn the company helped the Sage Colleges develop a robust theatre curriculum. It is not at all surprising to see what talented students select Sage today.

Larry: We haven’t had a chance to see this cutting edge musical much in these parts, the only production I can remember is the one at the University at Albany Department of Theatre which was last year. None of our Equity companies, nor even the Mac-Haydn or Theater Barn have staged it. That may because the music is so important to the whole production, and it requires violin, cello and bass in addition to piano, drums and guitar. Two or three synthesizers will never do the score justice. I was as impressed with the accomplished musicians and Music Director Marcus Schlegel, as with the actors. The cellist, Erin Rousseau, on whom much of the melody line rests, has a vibrato and intonation that infused the songs with real heart.

Gail: I saw a production of the 1890/91 Franz Wedekind play of the same name, upon which this musical is based, at Williams College many years ago. Spring Awakening is an ideal college show because you need to have a young cast and a fairly sophisticated audience. Really, the best way to “get away with” staging this fierce and graphic material is to bill it as education. The play has a prominent role in the development of 20th century theatre, and, as you mentioned, this musical version has made history too.

Larry: I loved the young actors, too. The story is set in the late 19th Century yet the journey from adolescence to adulthood is timeless, and director Strimbeck and her wonderful cast did not shy away from the themes of self-discovery and budding sexuality, did she. Under the thumb of repressive parents and teachers, it’s a wonder as many survived what with the adults withholding information on sex or to give them any grounding for future relationships. The torments that Wendla (Katie Pedro) and Moritz (Austin Lombardi) went through were very different, but the end result was equally tragic.

Gail: These characters are what we now consider high school age, but I understand that it is illegal to cast actors that young in this show because it is considered child pornography. There is a “high school version” available, but I shudder to think what it consists of. What is being performed here is the full Broadway version, but people who saw the show in New York have told me this is a kinder and gentler staging. There is no nudity, and the sexual encounter between Wendla and Melchior is dimly lit and played far upstage. In general this show is much less shocking and violent than the original.

I should make it clear that my complaints about the softening of the original material are not directed at Strimbeck or anyone else affiliated with this production, but with Sater and Sheik’s adaptation. Yes, modern audiences don’t like to sit through three acts of anything, and you sell more Broadway tickets with romance than sexual assault, but the whole point of Spring Awakening in both its forms is the desperate need for young adolescents to have full access to the information they need to understand and manage their new reality as fiercely sexual beings. When you side-step questions of consent, or skirt the horrors of a hasty and botched illegal abortion, you are denying crucial portions of that reality.

Larry: I was taken with the imposing presence of Lucas Phayre-Gonzalez as Melchior, who is sort of the glue that holds the whole story together, going to bat for Moritz when when his friend is being bullied by the imperious schoolmaster who clearly has it in for the lad.

Gail: By making Melchior and Wendla a romantic pair, instead of the awkward, nonconsensual hook-up Wedekind intended, they become blander and less interesting than many of the characters around them. Austin Lombardi turns in an astonishing and powerful performance as the tortured Moritz, and Taylor Hoffman is a stand-out in every way as Ilse. I literally could not take my eyes off her in the opening full-cast number, even though the stage was filled with talent.

Also notable were Keenon McCollum as the flamboyant and devious Hanschen and Charlie Barnett as wide-eyed Ernst. Both of them are mere freshmen at Sage, which bodes well for the future of the theatre program, as well as making the boldness of their performances even more striking. The whole cast is fearless, which is what really makes this story of violent actions and emotions work.

Larry: Though a lesser role, the voice and stage presence of Charlie Barnett shone through the ensemble scenes since he had the strongest singing voice in the cast, and there were many fine singers on that stage. He is thinking of pursuing a theatre career, and I can see why. He proved you don’t have to be the star to stand out in a crowd.

The choreography by Kyrie Ellison is sensational, clearly evolving from the original by Bill T. Jones and full of the same energy and excitement. Both Strimbeck and Ellison have a tendency to neatness as the wild movement combinations always led to an orderly tableau or reset of the stage for the next segment. The attention to detail of the whole ensemble demonstrated to me that this was no superficial production, but one that was exerting as powerful a connection on the performers as they in turn were having with the audience.

Gail: Strimbeck had her cast walking, dancing, creeping, and jumping all over the theatre. We sat in the front row and Moritz’ suicide scene was played mere feet away. Fearing the loud percussion of the gun shot, I put my hands up to my ears only to find Lombardi’s tear-filled eyes locked on mine. Earlier in the show the whole cast had mimed “See no evil, hear no evil, speak no evil.” How could I try to minimize Mortiz’ pain by covering my ears or averting my eyes at the crucial moment? Spring Awakening asks us to confront these issues with open eyes, open ears, and open minds.

Larry: I also had a finger in one ear (which has scar tissue on the eardrum) as a precaution. I was feeling the threat of a gunshot quite viscerally. Happily there was no loud bang at that point.

The Theatre Institute at Sage is carrying forward a great tradition, and it extends to the technical as well. The set, as you noted, is amazing. But having done lights more times (in my youth) than I care to remember, I am in awe of both Robert Brisson who designed their placement, and Samantha Tirrell who was responsible for their cues during the performance. Working with fewer instruments than a commercial theatre, and a huge swath of stage to cover, the magic was not in anything showy, but in simply doing the job right. The lighting was never obtrusive, never left a performer in the dark, and yet managed to never distract the audience so that the focus clearly remained on the performers, and to me, that is the sign of a true professional, and the technical crew – all of them – should know that a lot of that applause was for them, too.

Gail: I loved Juliana Haubrich’s simple but versatile set. It evoked settings as diverse as school rooms and graveyards, while allowing ample playing space in a relatively small venue. The James. L. Meader Little Theatre looks anything but little in this production, but the fact that it is an intimate space puts the powerful performances literally right in your face.

Larry: I agree, Gail, we can sum this show up in one simple word: GO!