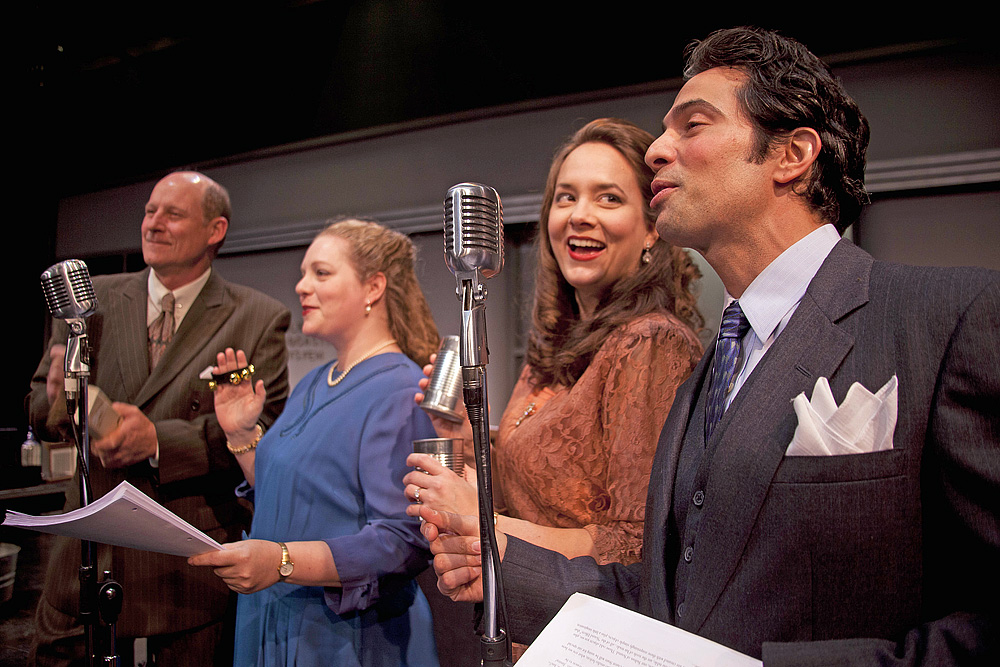 “It’s a Wonderful LIfe: A Live Radio Play” at Shakespeare & Company
Theatre review and discussion by Gail M. Burns and Larry Murray(Reprinted from the December 12, 2013 review)

Larry Murray: What can be more fitting for the holidays than It’s a Wonderful Life: A Live Radio Play which is the story of idealistic George Bailey as he considers ending his life one fateful Christmas Eve. Do you agree that Shakespeare & Company captured all the magic of Frank Capra’s classic 1946 holiday film It’s a Wonderful Life in this production?

Gail M. Burns: Darned if I know. I am one of the few adult Americans who has never seen the film all the way through. This iteration, adapted by Joe Landry from the screenplay by Francis Goodrich, Albert Hackett, Frank Capra, and Jo Swerling, reimagines the story as performed by five stalwart radio actors on a snowy Christmas Eve when the sound effects guy gets stuck in the blizzard and can’t get to the studio. We, the studio audience for the broadcast, get the fun of watching them cope with the emergency and perform all the music and sound effects as well as the well-worn story of George Bailey.

Larry: Landry didn’t miss a single plot point of the film, and the five actors created the dozens of characters with just their voices. It was astonishing to hear Ryan Winkles change his voice instantly from Clarence the angel (second class) to Bert the cop. He played a dozen roles, as did favorite Jonathan Croy and the amazing Jennie M. Jadow. These chameleons changed accent, tone and cadence from one character to the next like racers taking the hairpin turn on the Mohawk Trail.

Gail: David Joseph and Sarah Jeanette Taylor anchor the story as George Bailey and the woman he marries, Mary Hatch. They also provide much of the charming music, with Taylor on piano and Joseph as the lead vocalist. The whole show, but especially the music, was charming in its simplicity and beauty, with many songs sung virtually a cappella. Joseph plinks out a few notes on the xylophone and Winkles bravely tackles a trombone riff, but Jadow on violin and Taylor on piano provide the melodic lines.

Larry: What I liked most about the concept Landry came up with was its originality. Before he created the radio play, he actually adapted the film for the stage, complete with a huge cast of characters – no doubling – for high school students. It then went into community and professional productions where the huge cast became a problem in smaller communities with slim budgets. The radio play concept solved the problem, and five actors play all the roles, with Max Michaels (played here by the actual sound designer for the show, Michael Pfeiffer), the sound effects guy showing up at the last minute.

Gail: There are many, many stage and radio adaptions, the first of which aired in 1947 with Jimmy Stewart and Donna Reed reprising their film roles. This is the fourth time I have seen a stage adaptation, having seen the Sheldon Hartnick/Joe Raposo musical twice – at NYSTI in 2006 and Cohoes in 2011 – and the one-man version penned by Mark Sedlock (Fully Committed) at Barrington Stage in 2008.

Larry: The story of It’s a Wonderful Life came to author Philip Van Doren Stern in a dream. It appeared originally as “The Greatest Gift,” in 1943 and it is this short and remarkably complex story upon which the film and this play is based. What was wonderful for me was the added interest the setting in a radio studio gave us by creating the additional set of characters who were performing the play. Having them suddenly burst into song, play instruments and make the sound effects added a whole new dimension to the nostalgic old story.

Without the angels, the neighbors and family this would be a tale about suicidal depression. But Joseph’s George Bailey is also Jack Halloway, our radio host, and just as he breaks your heart you discover that the guy can croon a great tune! Which characters resonated for you? Did any misfire?

Gail: If I were a fan of hokiness I would have watched the film by now. I find the whole thing rather maudlin, but this rendition touched me, especially as Winkles delivered the “moral” which I don’t think I’d ever really heard before. “Remember, George: no man is a failure who has friends.” Recognizing this as a story about the interconnectedness of humankind, rather than as a story of material success of failure was an important revelation for me. In terms of financial success, George Bailey never does escape the ropes of debt that tie him to Bedford Falls, but he breaks free of the thought pattern that traps him into believing that constitues failure.

Larry: Director Jenna Ware and the actors took the script of It’s a Wonderful Life: A Live Radio Play and its many stage instructions seriously. But they also embellished many of the sequences to reflect the comfort this cast had working with each other. All while accurately portraying life in Bedford Falls and the depth of each character. Their voices were in Bedford Falls, but their bodies and expressions were in the studio of WBFR.

Gail: I haven’t seen the script, but the use of two sound effects tables, placed on either end of the long rectangular playing space in the Bernstein Theatre, kept the actors on the run and gave them a chance to play to all three side of the audience in turn. Radio performance, even before a live audience, can be static to watch, but Ware avoided this pitfall completely.

Larry: I do disagree with the placement of the intermission. The stage instructions say that the play can run through without intermissioin – it is about 100 minutes long – or there can be an intermission at either of the two commercial breaks built into the script. The director chose the second commercial break, but the first one would have been closer to the middle of the play. Perhaps the playwright erred in not limiting the break – and intermission – to one central point so that it wouldn’t come off as unbalanced as it did. Still it is a minor quibble.

Gail: Not to beat a dead horse, but I was thrown off by the placement of the intermission too. There is a working clock on the set, so the audience is actively aware of the passage of time. When we had passed the 90 minute mark and George had headed for the bridge I had decided that we were going to go straight through to the end with no intermission, and suddenly the lights came up. I was ready for the climax of the story.

Larry: In the end it is the power of the story that makes seeing this play worthwhile. As in A Christmas Carol, it is a battle between greed and generosity, nice guy vs. rich creep, and good triumphs over evil. Too bad that these days it mostly only happens on stage

Gail: It certainly feels like the Mr. Potters of the world have the upper hand right now. But at least one triumph over greed has been stopped in its tracks this holiday season – Paramount has successfully blocked production of a sequel film. Sequels are rarely a good idea, and this was a particularly bad one!