Chita Rivera and “The Visit” open on Broadway to mixed, but mostly positive reviews 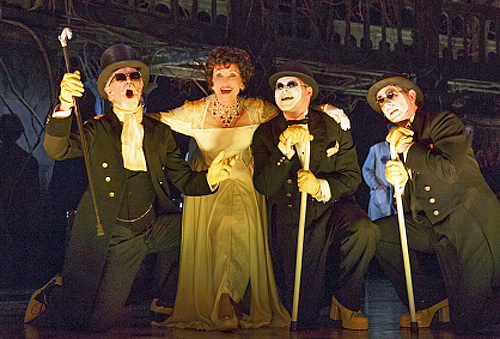 Chita Rivera and “The Visit” open on Broadway to mixed, but mostly positive reviews

Last summer Williamstown Theatre Festival hosted a glorious revival of Kander and Ebb’s dark musical The Visit and tickets were the object of veneration as New Yorkers joined locals in trying to get a peek at what director John Doyle, playwright Terrence McNally and Broadway superstar Chita Rivera had wrought. A superb cast including the return of former WTF leader Roger Rees clinched the deal for most of us locals. Gail M. Burns and I gave it a rave, and wished it well in its rumored plans to move on to New York City this Spring. Last night it opened officially and the reviews are in.

They are mixed in their reaction, and that is not unexpected given that this is no light and frothy fun night of bubbly music and shapely chorines. Rather it is a dark tale told in music and dance, of a young lover getting his comeuppance for having turned his back – and the whole town – against a young woman in trouble.

But not all that much seems to have changed since Burns and Murray first reviewed it [link] in Berkshire on Stage.

There is much to admire in the production, but if a writer is honest there remain some problems, too. Many of you know I also write for Broadway World, and Jan Nargi, my colleague there sent us a note last night about her reaction to the opening: “I suspect Chita will get raves. The show, not so much. I enjoyed many aspects of the staging, the quartet of young and old Anton and Claire in particular.

“Graciela Danielle is a wonderful choreographer who is able to evoke great meaning from her dance. But the show never fully achieves the devastating impact it should given the stark contrast between the romance and the horror. The stakes are just never high enough imo.

“In shifting the weight of the story from Anton to Claire, some depth is lost. I can see why McNally, Kander and Ebb went that way. It is a musical, after all, and no one writes female character songs like they do. It’s just that the show tries to straddle two worlds, and it’s more successful at finding the pathos in the romance than in the macabre bargain.”

Here are some excerpts from the other reviewers:

Terry Teachout, Wall Street Journal: “The Visit” is a cynical tragicomedy whose score is as gorgeous as its heart is hard…Kander’s soaring, waltz-scented love songs are harmonized in an off-center manner subtly suggestive of dirty work at the crossroads…As for Ms. Rivera, who sounds like a cross between Hermione Gingold and Rex Harrison and is made up to resemble a walking mummy, she’s all too terrifyingly believable as Claire…Mr. Rees, by contrast, is rather too ingratiating, and Mr. McNally’s jokey book softens the impact of the play…But “The Visit” is horrifically potent in every other way…”The Visit” isn’t for everyone. But Mr. Kander and his late, lamented partner never wrote a finer score, and…you’ll thrill to their cruel tale of what men who dare to call themselves decent will do to one another if the price is right.

Mark Kennedy, Associated Press: Trust a John Kander-Fred Ebb musical to make the sunny color of vitality and youth positively menacing…[Kander’s] music is wonderfully complicated; some are fully fleshed out numbers and others seductive sketches that pull you in…Hould-Ward…has a surreal retinue of three men in tuxes and black hats who wear sunglasses, caked-on makeup and extravagant yellow shoes. They sing in falsettos and are utterly chilling…Rivera is as elegantly regal, funny and sly as always. Her billionaire is haughty and irritable but there’s simply no denying her…”The Visit” is sophisticated and beautiful and yet has that typical glorious chilling view of man that you expect from a Kander and Ebb show.

Ben Brantley, The New York Times: …despite a score that at its best has the flavor of darkest chocolate…”The Visit” only rarely shakes off a stasis that suggests a carefully carved mausoleum frieze. Nor does the show ever quite make peace between its uneasily twinned strands of merciless cynicism and a softer sentimentality…The show’s cynical and morbid components are more persuasive, if a tad monotonous…That “The Visit” still holds the attention has much to do with Ms. Rivera’s command of the stage and her ability to find a concerto of feelings in what might have been a single-note role…Her singing voice, sharp-edged and resonant, is identifiably that of the original Anita in “West Side Story” but invested with an authoritative, all-knowing world-weariness.

Elysa Gardner, USA Today: The excellent Roger Rees gives a nuanced, moving performance as the older Anton, and John Riddle embodies masculine grace playing him as a young man. But as Riddle and Veintimilla watch and shadow the more mature stars — dancing and sometimes singing — the mood becomes one of melancholy longing, bordering on melodrama. This seems at odds with the Brechtian vibe established by the severe-looking townsfolk surrounding them…In 100 minutes, Doyle thoughtfully touches on a range of subjects: mortality, bigotry, greed, revenge, regret…Ultimately, the show’s most valuable asset is Rivera. Walking with a cane, the 82-year-old powerhouse expertly conveys her character’s fragility and acerbic wit. Yet even while playing a woman who has been broken by bitterness, Rivera can’t help but be a transcendent force. Her presence alone makes The Visit worth the trip.

Jesse Green, Vulture: …the version that has now arrived at the Lyceum represents not only a triumph of persistence but a distillation of many years’ worth of theatrical savvy. It is as lean and as sere as a skeleton…Doyle is expert at stripping away the surface decoration and audience sops that can detract from the seriousness of the form…With The Visit, this creates a certain tension, though. You have, on one hand, the unimpeachably cold — almost terrifying — production design…On the other hand, you have Rivera, whom everyone adores and hopes to see succeed in a challenging role at age 82. This a tension that’s useful, at least insofar as it puts the audience in sympathy with the devil…The songs, too, pull in two directions…The better the songs are, the weirder the show gets…Alienation and gregariousness make strange co-stars, but then so did Kander and Ebb. What a joy to have them back on Broadway and to think that, even half-dead, they’re unkillable.

Elyse Sommer, Curtain Up: Frederick Duerenmatt’s macabre revenge tale, as musicalized by John Kander and the late Fred Ebb, has arrived in New York after a long and bumpy ride. It lost its originally intended star and, at one point a producer. A production in DC came off as too heavy handed for a Broadway move. But with Chita Rivera committed to playing the grudge bearing, much married Zachanassian, the show kicked up its heels once more at the Williamstown Theater Festival — this time with John Doyle at the helm to find a way to get it right for prime time.

Doyle’s gift for concision without fatal omissions and a superb ensemble headed by Rivera worked like a charm. His intermissionless production was thrilling and rich. And its lost none of that richness on its way to Broadway.  Unlike some shows that have to adjust from large but not too large venues to huge Broadway theaters (case in point: Barrington Stage’s transfer of On the Town the show feels as at home in the Lyceum Theater as it did in Williamstown’s Main theater.  Chita Rivera, the sexiest and most dynamic octogenarian in town, is unlikely to need an understudy very often. However, just in case she needs a day off, her understudy the very fine Donna McKechnie, should also be satisfying.

Alexis Soloski, Guardian: The pleasure in her performance and in Rees’s and of Jason Danieley in the small role of the schoolmaster eclipse the blurriness of the story The Visit wants to tell. But only for a while. Though the show runs only 100 minutes, there’s surely room for more plot and more emotional arc than it provides. And despite the omnipresence of a young Anton and a young Claire, sighing and swaying and occasionally screwing in the background, it can’t really sell itself as a swoony weepie, however nice the ballads, particularly as it’s in the more macabre numbers – “Yellow Shoes”, “I Will Never Leave You” – that the tone seems most confident. However fine the songs and the set, it may not be visiting Broadway very long.

Marilyn Stasio, Variety: The show is more literary piece than conventional musical. But it has a dark, sinister beauty — and who could resist a visit from Chita?…And what a commanding figure she strikes…Like the play, McNally’s musical treatment of the central dilemma doesn’t add much tension to what seems a foregone conclusion. And, like the play, it begins well and ends well, but sags in the middle. The real problem, it seems, is the inadequacy of Anton’s soul-searching about his own guilt. Rees looks very much like someone who’s going through hell, and he expresses it well in “Fear.” But this morally shabby character hasn’t got an ethical leg to stand on. Kander just can’t help himself. Even in what may well be his darkest work, he writes beautiful romantic melodies.