A spellbinding tale of two actors: Ed Dixon and “Georgie” Rose at the Sharon Playhouse 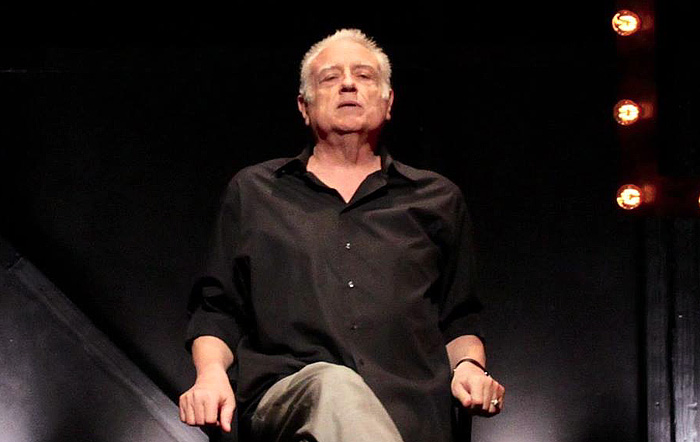 A spellbinding tale of two actors: Ed Dixon and “Georgie” Rose at the Sharon Playhouse

Georgie: The Life and Death of George Rose
Theatre Review by Larry Murray

An actor’s memoirs are always fascinating since they often reveal the real person under the theatrical persona. Ed Dixon’s play about George Rose goes incredibly deep into the life of George Rose, but in so doing, we find that we are also learning as much about Ed Dixon as this personal story unfolds.

The lives of Ed and George became intertwined in 1968 when Dixon arrived in New York from an oppressive Oklahoma childhood and began to learn about both the theatre and life from the British actor who was one of theatre’s greats. Rose earned two Tony Awards for best actor and numerous other awards and at one point was the hottest actor on Broadway. Everybody wanted the consummate showman in their show.

Over the years, Dixon has followed in his mentor’s footsteps, earning his own accolades. He is a regular at DC’s Signature Theatre in Arlington, VA where this show will have its official premiere. I last saw him there in Sunset Boulevard several years ago with Florence Lacey and D.B. Bonds and I can still hear his booming voice belting out “Greatest Star of All.”

Dixon is also a regular at Barrington Stage Company where he will travel next to play the Innkeeper in Man of La Mancha. He played Judge Turpin in that company’s memorable Sweeney Todd.

For this play, the history of Rose’s life upon the British and American stages form the framework for the first two-thirds of the evening and for this Dixon lays it thick, teasing and tantalizing us with anecdotes, snippets of song and dance and Dixon’s pitch perfect impersonations of the colorful and famous. Even those who never heard of George Rose quickly come to appreciate the wit and wisdom of this gifted actor whose trademark was to rarely do things the same way twice, especially in his comedy roles.

Like a book, it is a story told in black and white, with amazing swaths of color thrown in for dramatic effect. The set and lighting by Jamie Roderick consists of scenery flats turned around and painted black, while Dixon is outfitted in a simple pair of slacks and collared shirt in black and grey so that your focus always returns to his malleable face and hands. And oh those hands, they are instruments capable of a hundred emotions and Dixon employs them like a virtuoso.

The storytelling overflows with Dixon’s wit and wisdom, and his eye for detail. As his encounters with the older actor accumulate we perceive that this is as much a personal memoir as it is a cathartic vehicle for Dixon. He has made his name on stage, winning his own awards, but has also written and composed plays and musicals including Fanny Hill which began at the Goodspeed and traveled to New York City. In 1987 he was nominated for a Drama Desk Award for his performance in the musical Shylock, for which he wrote the book, music, and lyrics.

Rose invited Dixon to the Dominican Republic for a vacation and it was on this trip that he discovered that he never really knew the whole Georgie. Rose had a very young lover in that country, one he was raising as a son, and planned to leave his estate to. Dixon recounts how the young age of the boy upset him, and that the whole idea of feeling safe in the rural and desperately poor community of Sosúa (four miles from Puerto Plata airport) was foolish. Nevertheless Rose felt quite at home, perhaps because he loved the idea of a little danger in his life. When Rose lived in a converted Greenwich Village loft, his roommates were a 60lb lynx, a South American wildcat, a caracal and numerous other cats and dogs — all of which accompanied him on tours in a mobile home. “His hands,” Dixon recalls, “were covered with scars and bitemarks from hand-feeding the beasts.”

The last third of the show follows that aspect of his encounters with George Rose to their ultimate, and deadly conclusion as his idol meets a horrific end. On May 5, 1988, during a two-week hiatus from the national tour of his hit show, The Mystery of Edwin Drood which won him his second Tony Award, Rose was tortured and beaten to death by his adopted son, the boy’s biological father and uncle.

I can only imagine the horror of that news reaching Dixon, and the aftermath was his own meltdown into drugs and alcohol, and ultimate recovery which delivered to us an actor with more depth and understanding (and love and kindness) than we had known earlier. As Dixon retells the story of death, depression and redemption there are moments he literally quakes with the memory, and sloughs off the remaining shards of regret with a regal and brilliant salute to life and the glories of the theatre.

With expert direction from John Simpkins, Georgie sometimes is seated in a chair center stage which is alternately suggestive of a throne for one of theatre’s royal personages, and at other times for the isolation and loneliness of an actor on the road through America, playing endless performances in towns and cities that often blend together. But Dixon never alights on that seat for long, as some new memory or insight jolts him bolt upright, pacing downstage left and right, looking through the fourth wall for some sign that the audience understands the implications his witty reminiscences conjure up. It is in these open-ended moments, as he searches to read our response to his story that we have to decide the meaning of his life, and that of George Rose for ourselves. The actor has removed his mask, and reveals himself in a moment of profound humility before putting it back on.

In the intimacy of the Stage Two Bok Gallery I hung on every word that Ed Dixon wrote about George Rose, and reveled in his impersonations and delightful quips from the famous and the forgotten. He was, after all, talking about people who I had known on the stage, even some people, like Peter Ustinov, that I had spent time with. (I interviewed Ustinov in 1959 when I was in the Navy for a shipboard newspaper I edited.)

Dixon’s first hand account certainly chronicles the life of the great George Rose but its real payoff is that it also gives us insights into why Ed Dixon and his work incorporates the essence of great theatre, stripping away everything but the essential story. As a playwright, and an actor, Ed Dixon has done it again, this is one must-see play.