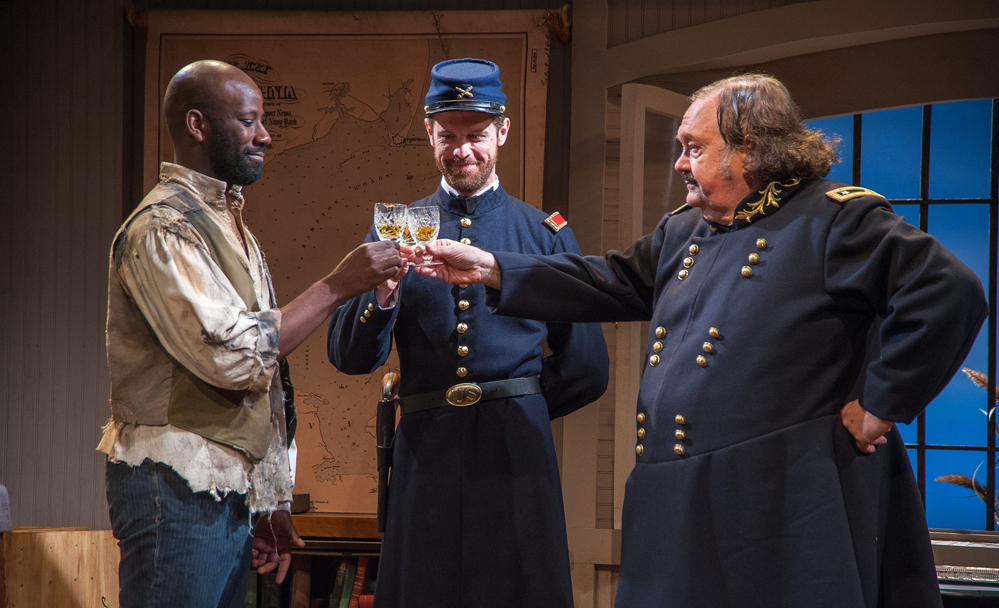 Editors Note 6/3/15: Since this review appeared, there has been a change in casting. Under doctor’s orders, David Schramm who had been playing the title role in Butler has had to withdraw with Wally Dunn taking over the part for the rest of the run.

Larry Murray: When Julianne Boyd announced the opening play of the Barrington Stage Company season would be about the Civil War and the long forgotten Major General Benjamin Franklin Butler (1818-1893), and that it was a Civil War comedy, it seemed an odd choice. And having just seen Butler, it seems an unlikely blend of biography, political drama and comedy that takes us back a century and a half, and delivers quite a theatrical wallop. But I am not sure how to classify this play, do you Gail?

Gail M. Burns: Playwright Richard Strand tells the story in a broad sit-com style, and Director Joseph Discher has wisely chosen a talented and recognizable American sit-com star David Schramm to play the lead. Schramm is so much more than Roy Biggins, the odious greasy owner of a tiny airline who he played on Wings (1990-1997), he is a Juilliard graduate and has been acting non-stop since he was a teenager, but when we see him, we are primed for laughs, which he and the rest of the cast deliver in spades.

Larry: Strand could not have had an easy time imagining the conversation between the newly minted General Butler – he has been in the Military just four weeks on May 23, 1861, the day the play takes place – his adjutant Lieutenant Kelly (Ben Cole), and the runaway slave Shepard Mallory (Maurice Jones). The plot revolves around the question of what you do with a slave seeking sanctuary when the law says you are required to return him to his owner. But as the play unfolds we learn it’s all so much more complicated than this since this is no ordinary slave. The supposedly illiterate and uneducated Shepard Mallory is anything but. Butler is at its most intense in the encounters between the General and the aggressive slave who will not take “no” for an answer. Their verbal volleys led the lawyerly officer to conjure up a rationale for the Union to accept and conscript slaves as contraband from the war, and in so doing it deprived the South of thousands of slaves whom they had been using in their own conduct of the war. As the war progressed, the South found their former slaves now part of the Army determined to beat them down. Sometimes at this historic distance from the conflict, we forget how breathtaking those years were. So much gets lost in the mists of time.

Gail: Mallory is the character who Strand undoubtedly had to invent from whole-cloth since he and the two slaves who arrived at Fort Monroe with him, were property, not people. I cannot find a record of their names. So Strand had free rein to make this man who he needed him to be for the purposes of the play.

Larry: Strand became aware of the historical events from a footnote in a Lincoln biography. “The information was tantalizing because it didn’t make logical sense,” Strand said in an interview with the New Jersey Repertory Company. “I couldn’t understand why an anti-abolitionist supporter of Jefferson Davis would take such a personally risky stand against slavery. Doing more reading about Benjamin Butler didn’t really answer that question. Writing the play was my attempt to find a plausible explanation for something that seemed inexplicable.” Strand ultimately cast Butler as a savvy and practical lawyer, and the feisty slave as a sassy, chameleon like character trying to figure out his new environment.

Gail: Butler, who earned the nickname “The Beast” during the course of the Civil War, was an anti-abolitionist and an anti-semite. But what he started by refusing to return these three men to their “owners” led directly to the Emancipation Proclamation and the eventual freedom black Americans so fervently sought. That the route there hinged on the legal construct that they were property rather than people is despicable, but that is often the sorry case in human history. But whether Butler did what he did with the simple idea that he would acquire free labor or whether he actually saw the slaves as human beings with rights, the end result changed the course of history.

Larry: Butler was a corpulent general, but also a politician and a lawyer making him a complex figure to convey. David Schramm fills it with the bluster of a military man and the logic of a lawyer making his case. Schramm may not get roles as a leading man or lover, but the roles he lands are husky ones any actor would love to sink his teeth into. He’s the sort of larger-than-life actor you want playing Big Daddy in Cat on a Hot Tin Roof or Matthew Harrison Brady in the play about teaching the theory of evolution, Inherit the Wind. In fact, Inherit the Wind is the other play that comes to mind when I think of controversial issue plays that are filled with both great drama and great laughter. Perhaps the humor is needed to lighten our nervousness about controversial topics.

Gail: Schramm has recently played Falstaff, another larger-than-life role, and you and I thoroughly enjoyed his performance as Pozzo in Waiting for Godot at the Berkshire Theatre Group in 2008. But every funny man needs his straight man, and here Cole and John Hickok as the Confederate Major who comes to collect the “stolen property,” all play it straight while Schramm blusters and leads them a merry convoluted dance through the maze of military and legal order. Jones gets to play Schramm’s equal, which is interesting though undoubtedly historically inaccurate. Strand sets this up neatly by having Butler immediately invite Mallory to call him “Ben” and which allows Schramm to suffer a shuddering take of discomfort every time Jones utters the name. The General and the slave are not quite as equal as all that!

Larry: Discher is a first time director at Barrington Stage, but he directed Butler at its world premiere at NJ Repertory Company in 2014. While the play is primarily the give and take between the General and everyone else, the director has used a subtle hand in guiding the movement around the stage and the bits of action that erupt now and then.

Gail: The humor here is very broad, often bordering on the slapstick. Schramm does a classic spit-take, and takes a tumble, while off-stage sound effects create the hilarious illusion of the blindfolded confederate Major being not so innocently led to bump loudly into door, walls, and furniture. While Brian Prather has designed a handsome and realistic set, Jennifer Caprio’s costumes are quite “stagey” allowing Schramm full range for his physical comedy and visually reminding the audience that this is History Lite.

Larry: The best lines in the play often ambush you when you least expect them, and everyone seemed to hit their mark with perfection and layer by layer the full picture emerges as to how the ground was laid for the ultimate Emancipation Proclamation on January 1, 1863, which actually freed the slaves through the interim step of allowing them to escape to the north as “contraband”, and in so doing undermine the resources of the south in its attempt of secession. It’s very much a history lesson disguised as a great evening of theatre.

Gail: Without its layer of recognizable and comfortable comedy, Butler would be a disconcerting play indeed. With it the story is rendered palatable for the primarily white audiences who buy theatre tickets – the white guys are clearly in charge here and act as “saviors” to the slaves, who quickly started flocking to Fort Monroe – more than 500 over the ensuing three months. Although Strand leaves us hanging as to what reaction the Lincoln administration will have to Butler’s dramatic legal action, in fact there was quick government approval Congress gave it the force of law less than six months after Butler took his stand.

Larry: One of the recurring funny buts in Butler is how the irrepressible Shepard Mallory would goad the General by always having the last line as he left his office, sometimes in shackles, sometimes not. I will do the same here and give Butler two thumbs up. To that I will add a salute to everyone involved for bringing us this brilliant evening of seriously funny history which kicks off theatre in the Berkshires for summer, 2015. Once again Julianne Boyd has selected a winner of a play. It boasts a great cast and creative team who have created a superlative evening of theatre that manages to be truly different and immensely entertaining at the same time.