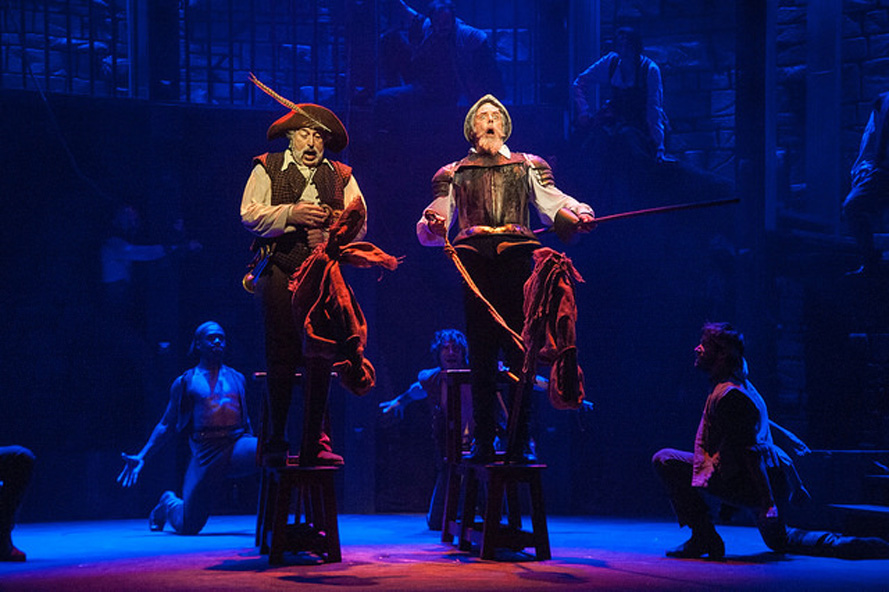 Gail M. Burns: Julianne Boyd has picked the perfect musical to coincide with the tenth anniversary of Barrington Stage Company’s move to Pittsfield. Man of La Mancha is an American musical classic that packs a big story into a small package and proves the perfect star vehicle for Artistic Associate Jeff McCarthy, who has been playing this role on various stages for the past six years. McCarthy has had a long and successful association with BSC since its early days staging shows at Mt. Everett Regional High School.

Larry Murray: Hard to believe it’s been fifty years since I first saw this audience pleaser with Richard Kiley in the lead role. It played for 2,328 performances in New York and won five Tony Awards including Best Musical. Under Boyd’s direction it is both intimate and spectacular as it engulfs you with its magic and imagination. Richard Kiley wowed them in the original, but it’s clear that Jeff McCarthy redefines the role for any who follow him. And right up there with him are the incredible Tom Alan Robbins as his sidekick Sancho Panza, Felicia Boswell as Aldonza and Ed Dixon as The Innkeeper. The cast – including the Muleteers who helped him tell his story – was well nigh perfect.

Gail: I was all of eight when Man of La Mancha opened in New York, but my parents bought the cast album and I quickly memorized the score and started begging to see the show. It took them five years to decide I was “old enough” and I was presented with tickets as a 13th birthday present in 1970, so I have always been very glad the show had such a long Broadway run!

Larry: McCarthy first took on the role of Spanish novelist, poet, and playwright Miguel de Cervantes (1547-1616) and his “mad knight” Don Quixote in 2009, and has been tilting at windmills ever since. The original novel was published in two parts in 1605 and 1615, so 2015 marks its 400th anniversary. The two volumes are very different in style, but both comment satirically on the outdated traditions of chivalry and life in 16th century Spain. The play starts as Cervantes is thrown into jail to await his trial by the Spanish Inquisition and his fellow prisoners are recruited to tell his tale.

Gail: Cervantes was imprisoned briefly, but for financial rather than religious matters and he never faced the dreaded Inquisition. But he claimed that he began to write the first volume of Don Quixote in prison, and this is where librettist Dale Wasserman takes his inspiration for this musical which tells neither Cervantes’ life story nor the full scope of his great novel, but which is a thrilling piece of theatre in its own right.

This was my first time seeing a production of Man of La Mancha since reading Don Quixote in its entirety (in translation, of course, my high school Spanish stretches only so far) and it did my heart good to see McCarthy and Tom Alan Robbins as Sancho in full costume astride Rocinante and Dapple – their steeds most cleverly constructed of the detritus of the prison cell – setting off in search of adventures at the conclusion of the opening number.

Larry: As a duo, McCarthy and Robbins melded together more completely than I have seen in other productions, and the bond was reinforced when Sancho sings “I Really Like Him”. Gail, you mentioned that with this character, Cervantes basically invented the role of the sidekick.

When the musical was first produced in 1965 there was a concern that the darker elements of the story might turn people off, so a great deal of emphasis was placed on the comic elements, especially the role of Sancho which became more of a comic role than one of a loyal sidekick. Certainly West Side Story and Carousel had their dark scenes, but they were both heavily laced with happier moments. Since then darker musicals such as Sweeney Todd and The Visit have shown that musical drama works as well as musical comedy, and Julianne Boyd has restored Man of La Mancha to its more tragic and harrowing roots in the brutal conditions that fostered the Spanish Inquisition.

Gail: Cervantes did indeed invent the comic sidekick in Sancho, and by the end of the second volume of Don Quixote he is the star of the story in several instances. I have always been slightly appalled by the trend of casting obviously Jewish Borscht Belt comics in the role in this musical in 20th century productions since Spain had forced all its Jews, and its Muslims, to convert to Catholicism or leave the country at the turn of the 16th century. Sancho is Cervantes “common man” set against the flamboyant excesses of his master. I love how lyricist Joe Darion gives the illiterate Sancho such simple lyrics in his solo “I Like Him.” Literacy is a scarce commodity in this world – Don Quixote is one of the very few characters who can read and reading is explained as the direct cause of his madness.

What sets Man of La Mancha off from Don Quixote, is the character of Aldonza, the prostitute who works in the kitchen of the inn where the majority of the show takes, and who Don Quixote sees as his Lady Dulcinea. In Cervantes there is a local wench named Aldonza Lorenzo, and there is the unseen Lady Dulcinea del Toboso, to whom the Knight dedicates all his exploits in true chivalric fashion, but they are not the same person. In this quotation from his Diary for I, Don Quixote, Wasserman explains how his Aldonza was born in 1959:

Early in the [writing] process I encounter a serious lacuna in my concept. There is no character through whom the Quixotic ideal will flower finally, who will experience catharsis through dedication to the Quest… And so is born the character of Aldonza, ‘a savage alley cat, veteran if not always victor of many back-fence tussles,’ whom Quixote will identify as his Lady Dulcinea…My Aldonza will become the pivot upon which the entire play turns, the catalyst which makes it “work.”

Man of La Mancha is a musical without a love story. Aldonza falls in love with the Impossible Dream, not with the dreamer. As a girl, and as I said, I was eight when I first met Aldonza, I was immediately struck with her power and anger and independence. My parents could prevent me from seeing her live on stage, but they could not stop me from learning the words “slut,” “whore,” and “strumpet” from her, from learning that sex and love were two very different things, and that there were women in the world who did not live the cozy middle-class married lives I saw on TV in the mid-1960’s but who nevertheless had souls and dreams and dignity. This was no Donna Stone or Carol Brady, and I found her MUCH more interesting. What did you think of Boswell and Boyd’s take on this raw and powerful woman?

Larry: While McCarthy got the biggest response from the audience during the production with the iconic song “Dream the Impossible Dream,” it was Felicia Boswell who brought the audience to its feet at the curtain calls. Her performance was honest and gritty, with emotion overwhelming her sung notes once in a while. I think Boyd didn’t dampen her inner fire in the role of Aldonza very much, for to do so would have taken the heat out of her performance. Boswell was incendiary and I suspect her performance will achieve the maturity it deserves as the company settles into the show. Both her rape scene, and the Don Quixote fight scene with that ladder need the ultimate smoothness that comes with multiple repetitions.

Gail: With the exception of Don Quixote and Sancho, all the other “roles” in the play within a play are cast from the ensemble of prisoners who greet Cervantes and his servant. Rosalie Burke and Meg Bussert play the much less interesting “good girl” roles of Quixote’s niece and housekeeper whose rabid self-interest is translated into selfless deeds of caring when told to the Padre (Todd Horman) in the confessional. I enjoyed Horman’s wide-eyed transition from addled inmate to devout country priest and his subsequent strong vocals. I also loved Jonathan Spivey as the hapless barber whose shaving basin Don Quixote quickly co-opts as his Golden Helmet of Mambrino – oh lord that is a funny number! You have noted that Boyd wanted to restore the tragic aspects of Man of La Mancha, whose humor had been punched up originally to make it more “Broadway” back in the day, but I think there are still many great and appropriate laughs to be found in it – notably the sight of the Mad Knight wearing a shaving basin adorned with a filthy kitchen rag (a token from his Lady Dulcinea) with all the pointless pomp and circumstance of the Emperor without his clothes. This is the comedy of Cervantes, and it stands the test of time.

Larry: The set (James Kronzer) and lighting (Chris Lee) are spectacular, with the prison rising to the flies on the stage, and the mists of time lending lots of character to the Don Quixote fantasy scenes. Man of La Mancha is as much play as musical, and shifts between these two forms with ease, just as Jeff McCarthy alternates his role as Cervantes with that of his fictional character, Don Quixote. Part of that is helped along by the costumes (Olivera Gajic) especially that of the Moorish dancer (Lexi Janz) and the Knights of the Mirror.

Gail: The costumes were wonderful. Being fond of footwear, I was most taken with the enormous silver platform shoes worn by Dr, Carrasco (Sean MacLaughlin) and his cohorts in the Knight of the Mirrors scene.

Larry: The music direction by Darren R. Cohen was close to perfection, and the pit orchestra sounded wonderful as did the flamenco guitarist, Eric Despard. What was amazing to me is how brilliantly one scene dissolved into the next. For example, the first notes were followed by some intense flamenco dancing, and then in a flash we find ourselves inside a jail with furtive prisoners hiding in the shadows and Cervantes and his Manservant descending the long staircase. The guards wish him well, depart, and all hell breaks loose as the inmates grab his cape and belongings and the story unfolds. Gluing these scenes together without a pause is one of the things Julianne Boyd excels at, creating an almost cinematic approach to theatre that never fails to serve the material well.

Gail: Man of La Mancha is a “small” musical in that it does not have a big all-singing, all-dancing chorus, flashy production numbers, or even a happy ending. It is a tragedy and I found myself crying freely and often. The central message of the show, that it is not winning or losing, but trying that matters most in the ongoing battle for social justice is a powerful one. The star remains unreachable, but the quest goes on.

Larry: Since Man of La Mancha is both play and musical, fantasy and reality, it is not easy to categorize it. But with comedy to make you laugh, horror to make you gasp, and pathos to make everyone’s eyes tear up, it is a complex and rewarding tale about finding the extraordinary inside the commonplace, and a must see for any serious theatre-goer. You will leave singing Mitch Leigh and Joe Darion’s music and lyrics, and Jeff McCarthy’s praises.