Review: Ideas and personalities clash in “The How and The Why” at Shakespeare & Co 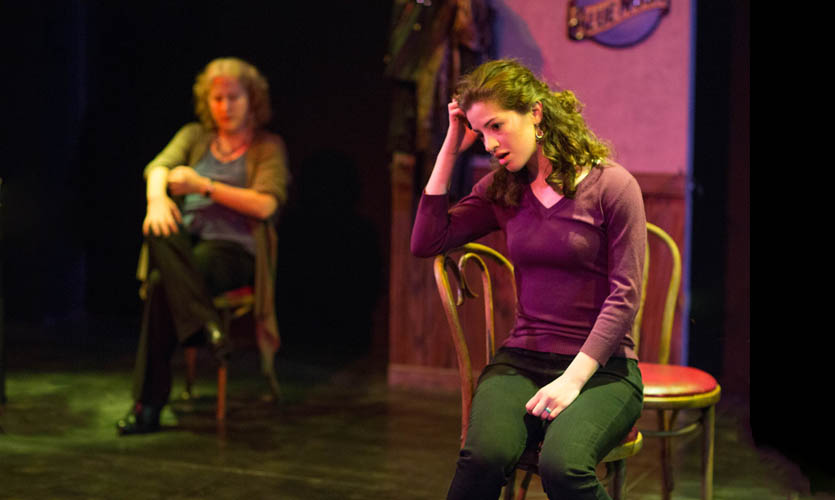 Review: Ideas and personalities clash in “The How and The Why” at Shakespeare & Co

The How and The Why at Shakespeare & Co
Theatre review by Gail M. Burns and Larry Murray

Gail M. Burns: The How and The Why is a play about the biological fact of being female. It is not about sexual preference or gender roles, it is about being biologically, physiologically female. The two characters in the play – women aged 28 and 56 – are evolutionary biologists by trade, and they are also mother and daughter, but only in the biological sense since Zelda (Tod Randolph) gave Rachel (Bridget Saracino) up for adoption immediately after birth.

Larry Murray: I wasn’t sure how I would react to The How and The Why, but the focus on what it means to be female was surprisingly revelatory to me. So many men joke about how they don’t “understand” women, they don’t realize that figuring it all out is a pretty complicated job for women, too. There are far more difficult choices than I realized as any women balances her personal and workaday worlds with the unyielding evolutionary demands of child bearing. It’s something you have done so smoothly and I have little understanding of. This play covers a lot of information as its scientific theories are discussed alongside some very human emotions. It’s a volatile combination. The relationship on stage could be compared to the Hadron collider because – at times – the mother and daughter came so close to annihilating their relationship with one another. But for all the insights science gives us, isn’t it limited in its contribution to understanding mammals, being more about contemporary women in the 21st Century than aborigines in the forest?

Gail: Playwright Sarah Treem addresses many aspects of the choices available to upper class white women in modern day America, yes. The choices available to women of other classes and races are very different, and actually more dramatic, which is why they are written about more often. Choices to reproduce, to marry, even to have a career that allows for financial independence are unique to this race and class in this culture.

Larry: While the how and why of scientific inquiry is easy to understand – how do things happen and for what reason – the collision between Zelda and Rachel is less easy to fathom. We know how the 29 year old tracked down her birth mother, but it is not at all clear why. Within the first few minutes of the play she seems unprepared to ask the important questions someone would ask a birth mother, Rachel makes an attempt to leave several times before the gentle comments of Zelda bring her back to their meeting.

Gail: What Zelda and Rachel have in common is biology – literally and figuratively. By this HUGE coincidence, the two women are in the same field and Zelda is in a position to get Rachel a chance to present at a biology conference of national importance. Each woman has developed a radical theory about the how and the why of female biology – Zelda’s involves menopause and Rachel’s involves menstruation. These women are literally linked by blood.

Larry: I simply loved the reading Tod Randolph gave playwright Sarah Treem’s lines, a combination of a concerned mother and a scientific mind trying to gently get at the root of Rachel’s sharp and often contentious retorts. I think Her petulance makes her remarkably ill-suited for the scientific field. Nevertheless, with her daughter also engaged in the same biological field, it is the science that binds them together, and later in the play, that will pull them apart. The constant batting of comments back and forth that alternate between scientific theory and personal attacks is like a multi-level political puzzle for the audience to solve. It kept both hemispheres of my brain on full alert, trying to foresee if there was an ultimate path to peace between them.

I am going to do a bit of a reveal here Gail, and talk about their clashing theories. The program notes suggest one might want to wait to actually see the play before becoming aware of them. But the theories are not the main point of the play, are in most reviews I read, and even in the summaries of the play online. Besides, there are other twists that are far more important to the plot which I wouldn’t dream of revealing. So here goes. Zelda has made her fame by proffering her hypothesis that the purpose of menopause is to provide communities with grandmothers who can help forage and care for the young during their extended development. Rachel proffers a theory for menstruation as a defense mechanism against pathogens transmitted by the male and his sperm. The scientific debate held my interest as much as the clash of personalities. I am just not that much of a fan of “woulda, coulda, shoulda” people who spend their valuable time on earth telling others how they should live their lives. Blech! The science – along with some fine acting – drew me into this play and makes this so much more than just an accusation-filled reunion of calm-and-collected mother and her grown up daughter who is constantly on the edge of fight-or-flight.

Gail: Sadly, I didn’t find Saracino a match for Randolph as an actress. The difference in skill level was most marked when they were called upon to cry. Randolph cried easily and naturally on cue, where Saracino covered her face with her hands and made noises. There wasn’t any physical resemblance either, which made it difficult for me to buy them as mother and daughter. I would be interested in seeing the play again with Randolph matched with a more skilled partner.

Larry: Director Nicole Ricciardi keeps the characters maneuvering through the myriad of twists and turns as the story unfolds. For a two-hander, The How and The Why brings a lot of other characters – ex-lovers, boyfriends, girlfriends, graduate students – into the discussion though we never see them. The theatrical conversation is free flowing as well, touching on science of course, but also probes the nature of relationships, careerism, the surprising sources of original ideas and the nature of genius. It is this complexity that kept me fully absorbed in every minute on stage, and why I recommend the first play of the Shakespeare & Company season as a intellectually and emotionally fulfilling evening of great theatre.

Gail: This will not be the hit of the season for Shakespeare & Company because of the uneven casting and because menstruation, which frequently and freely discussed, is not a topic that people, particularly men, relish. I think it is a very important topic and one that should be openly addressed– the theories Treem posits are fascinating and need discussion.- but they don’t sell tickets.