“Shining City” Reviewed – 90 minutes of self loathing, then a ghastly conclusion 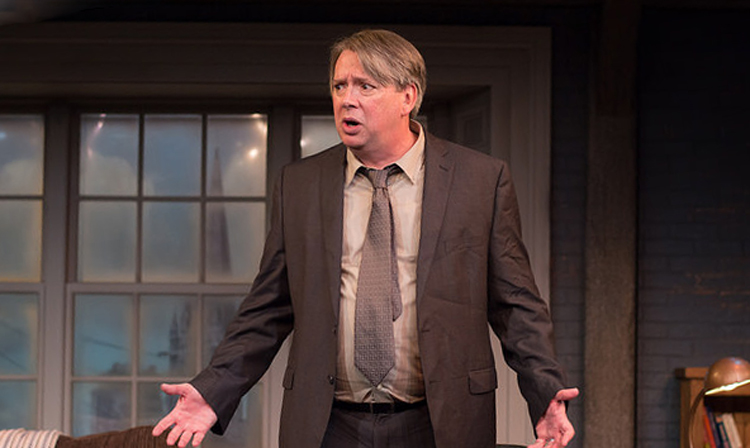 “Shining City” Reviewed – 90 minutes of self loathing, then a ghastly conclusion

L to R: Deanna Gibson as Neasa and Mark H. Dold as Ian.

All photos by David Fertik

Synopsis: A Dubliner seeks help from a counselor after claiming to have seen the ghost of his recently deceased wife. As their sessions unfold, secrets are exposed as a simple tale turns out to be anything but. Burns and Murray had decidedly different views on this Tony nominated play, with her thumb up, and his thumb down

Larry Murray: Shining City by Irish playwright Conor McPherson was nominated for two Tony Awards, including Best Play when it opened on Broadway in 2006. We saw it performed on Barrington Stage Company’s St. Germain stage with a superlative cast including a brilliant Wilbur Edwin Henry as John, a mess of a man filled with insecurities, guilt, confusion and regret. The production gets high marks, but the play itself – for all its rhapsodic reviews across the country – failed to excite this observer. You know that saying about how bored the shrink must be listening to everyone prattle on about their FDI’s (Fears, Doubts, Insecurities)? Well, this play proves there is a lot of truth to that jest.

Gail M. Burns: I think you’re missing the point here, Larry. Shining City isn’t about what is being said much as it is about what is being heard and felt, and not by the audience, but by the central character of Ian (Mark H. Dold) a former Roman Catholic priest starting his new career as a therapist and his new life as a sexual being – with all that that entails, including fatherhood – in modern day Dublin. A therapist’s job is to listen, but Ian not only listens to John, he absorbs him and subsequently reenacts his sad, repressed life as his own.

Larry: Trying to be rational about my dislike of this play, it comes down to the playwright whose dialogue, while perhaps reflecting how people actually talk, was full of tentativeness and uncertainty, with eruptions of monologues laced with periodic f-bombs. These were delivered with marvelous Irish accents, and a credit to dialogue coach Wendy Waterman. Lots of pseudo meaningful conversation filled with endless “ers” and “ums,” with frequent “you knows” to dazzle the audience with its authenticity, and perhaps for the playwright to prove he could write like Harold Pinter. All that embellishment got in the way of the story for me.

Of course, Dold is an ex-priest who couldn’t find God, may have homosexual tendencies and is now continuing in a job that continues to require him to repress his own ideas and feelings. Interesting stuff. But we mostly hear him recite clinical dialogue like “I understand,” and “That’s ok” from him as he encourages his patient to share more information while trying to keep him calm. John claims he has seen the ghost of his wife, who was recently killed in a car accident, and talks about their unsatisfying relationship.

Gail: Men in general do not communicate as well as women, or perhaps I should say men don’t communicate as women do. But human beings are social animals and we MUST communicate or perish. A human infant, born completely helpless, first learns to read, and then imitate facial expressions in order to communicate – that is how essential that skill is to our survival as a species, our infants learn to communicate before they can do anything else because that is what ensures them the continued food, shelter, and nurture adults provide.

But once we are physically able to provide those essentially for ourselves, communication only becomes essential for men in the mating game, while women need to continue to communicate to pass language and vital nurturing skills along to the next generation. McPherson shows us this clearly with John’s instant arousal and obsession with the text messages he receives from a married woman he meets at a party. Those communications become thrilling and precious to him, even though they are in the stunted language of modern technology, simply because someone is talking to him. He readily admits that communications broke down in his marriage long ago, chiefly because his wife proved infertile.

For John, communication’s sole purpose is to acquire sex, and sex – in a Catholic culture which discourages the use of birth control – is about reproduction, therefore communication becomes unnecessary in a relationship where no offspring are possible. For Ian, in his former life as a celibate priest, that was the case in every relationship. He probably entered the priesthood as a very young man and often silence is high on the list of Christian virtues to be practiced.

So we have a play about two men who do not, and cannot, communicate well, trying desperately to communicate. Ghosts are often explained as spirits who appear to the living to communicate with the living about unfinished business, so it is no surprise that one plays a central role here.

Larry: Some of us just don’t do subtle and poignant very well, and prefer our stories not to be a litany of I said/she said recitations followed by second guessing. The play lives in the characters past, and the present – which is all we really have – was completely ignored. It is how many people live their lives, turning the “what if’s” and “if only’s” over in their head, the surest way to becoming an alcoholic that I can think of. In fact, during the scene between Ian and Laurence the hustler, a bottle of wine is quickly consumed to drown the all-to-obvious inexperience and guilt.

Gail: As I said earlier, Ian is a complete empath and silently absorbs, then reenacts, John’s life in his own. After John describes the desperate loneliness of his marriage, Ian cruelly rejects his fiancée Neasa (Deanna Gibson) based on similar flaws in their relationship. Indeed, she has sought the company of another man who she feels listens and communicates with her more clearly and actively (whether or not he does, she rewards him with sex.) When John describes his stumbling and botched attempts at trading communication for sex – first with the woman he met at the party and then with a prostitute – Ian immediately picks up a male hustler Laurence (Patrick Ball) and embarks on his own hopelessly flawed attempt at connection and communication. At the end, when John’s life is back on track, his visions of his late wife, open-mouthed and desperately trying to communicate with him, are gone, guess what Ian absorbs into his life next?

Larry: I cannot imagine how much concentration and hard work the cast put into memorizing the hesitant, stammering dialogue with its numerous pauses, false starts and broken off thoughts. The accomplishments of the actors in Shining City in rendering their characters was quite marvelous.

Gail: This is an outstanding cast, very evenly directed by Christopher Innvar, which is actually a problem. In making all four characters equal, one loses track of the fact that the often silent Ian is the hub of this play’s wheel. Dold does a great job of actively listening to Henry’s John in the two therapy session scenes which form the meat of the play, but ultimately there are just so many ways to indicate to an audience what is happening in the mind of a character whose profession requires no overt reaction. It was hard for me, as an audience member experiencing the play in the moment, and even as a critic who knew she was going to be asked to respond to the entire production, to remember to watch Dold as much as Henry in their scenes together. The actors and director know what is happening, but the audience doesn’t and it is easy to miss subtle clues, even when they are there.

Larry: That their story was fascinating only in the process of discerning its subtleties was not enough to make me care for characters, subject matter or the play itself. I tend to run from these kinds of people in real life but they are everywhere, so I am quite sure this play will find its audience despite my sour response. I prefer plays with meaningful content, and Barrington Stage has excelled in finding them over the years. But in this case, it is my taste that does not mesh with this play, so Conor McPherson joins my short list of playwrights to be wary of in the future.

Gail: I thoroughly enjoyed this complex ghost story about loneliness and the failure to communicate in our modern world of cacophonous information. I enjoyed hearing and watching it, and I have enjoyed thinking, talking, and writing about it afterwards. Even as a garrulous female notorious for communicating everything loudly and constantly I completely understood and sympathized with these characters’ aching sense of isolation and search for contact.