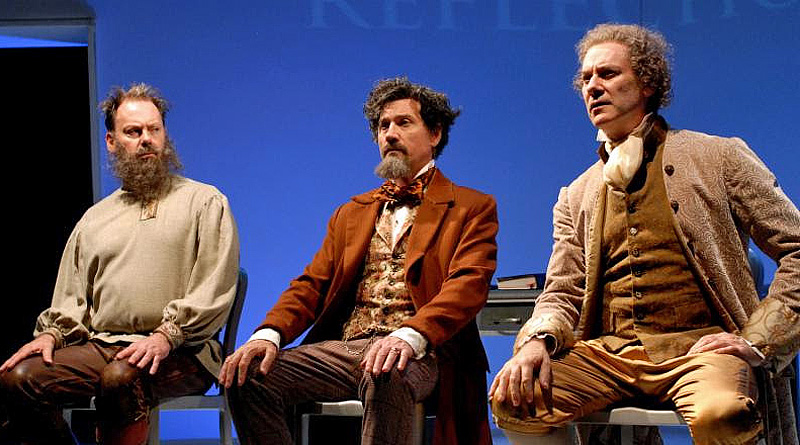 In 1987 playwright Scott Carter had a near fatal asthma attack. During a week-long stay in the hospital he confronted his own mortality, faith life, and ideas of what, if anything, comes next. This led him to the theological writings of Thomas Jefferson – who took a razor blade and two copies of the Bible and created his own gospel – and then to those of Charles Dickens and Leo Tolstoy, among others. Over the intervening years these studies and thoughts have coalesced into a 100-minute play entitled The Gospel According to Thomas Jefferson, Charles Dickens, and Count Leo Tolstoy: Discord. (For the purposes of this review we will use …Discord as the title.) The play had its World Premiere last year in Los Angeles, and now the Chester Theatre Company is giving it its second production and East Coast Premiere.

The premise of the play is that Jefferson (Ezra Barnes), Dickens (Rik Walter), and Tolstoy (Michael Sean McGuinniss) find themselves trapped together in a featureless, windowless room together immediately after their funerals. The fact that they died in 1826, 1870, and 1910 respectively seems not to matter on this purgatorial plane. They are together in a room with three chairs, one table, and, eventually, a notebook, pen, and Bible. The only door, through which they entered, refuses to allow them to exit. They must figure out what they need to do together so that they can move forward into the next plane of existence.

As they talk, filling in the historical and technological gaps in each others’ earthly knowledge – Jefferson is delighted by the invention of the fountain pen and reduced to tears by news of the American Civil War – they come to realize that each has written a gospel, and conclude that they need to collaborate on a new one. I had known about the Jefferson Bible, aka The Life and Morals of Jesus Christ, (approx. 1819), in fact I own a copy, but was unaware the Dickens The Life of Our Lord (1849) and Tolstoy What I Believe, (1884) had also written books people consider as gospels; and my main fear was that Carter had so immersed himself in his source material that one would need an M. Div. if not a D.D., to make sense of it.

The good news is that Carter, whose day job is as a writer for Real Time with Bill Maher, has not only written a play that is easily accessible to any literate adult, but a funny one as well. Obviously, all three men were Christian, but clearly, since they felt the need to write their own bibles, they were not of any orthodox persuasion, so anyone with an open mind can enjoy their philosophies, as well as how those beliefs came to affect their lives and work. In the penultimate scene, the three face the fourth wall, which we are told is a mirror, and confess how their beliefs failed them, and how they failed to live up to their beliefs.

The crux of their arguments can be summed up in their initial disagreement over the opening lines of the Gospel According to John. Using the King James Version, with which all three men would have been familiar, it is translated: “In the beginning was the Word, and the Word was with God, and the Word was God” – the Greek word Logos being translated as “Word” – a decision with which Dickens agrees. But Jefferson insists it is better translated as “Reason,” and Tolstoy that it should be rendered “Spirit.” Is God Word, Reason, or Spirit? Jefferson and Tolstoy reject the Trinitarian Theory, so He can be only One. They cannot agree.

Ultimately it appears that Gospel writing was perhaps the sin for which they are being punished, rather than the reason for them being together, and they move on to spoken, and then written, confession before the door, maybe, is opened.

This is Byam Stevens’ last directorial job as Artistic Director of the Chester Theatre, and he has done a fine job with keeping his actors in constant motion. This is a very talky play, and the set is deliberately confining, but Stevens paints several strong stage pictures along the way. All three actors look passably like the historic figures they are playing, well aided by Charles Schoonmaker’s costumes. No separate credit is given for the wigs and make-up, so I assume those were also of Schoonmaker’s design. When looking at period design, it is the pants that separate the men from the boys. Men’s pants as we know them today – with pockets and zippers and belt loops – are a very modern invention. I am happy to report that Schoonmaker has used authentic period designs for the men’s trousers and all is well with the world.

David Towlun has designed an interesting asymmetrical all-white set, expertly lit by Lara Dubin. Scene titles are projected on the back walls of the set in such a way that they are easily visible from anywhere in the house, and they remain visible in a dimmer version throughout each scene, keeping the author’s intention in mind.

My only small complaint is that …Discord is rather long to sit through without an intermission. I understand the idea that the theological argument is continuous and an intermission would disrupt its flow, but the discomfort of fanny fatigue generally sets in at about 75 minutes no matter how fascinating the play, and the insertion of a break might enable the audience to pay closer attention in the last half hour.

Chester used to be known by the quaintly misleading name of The Miniature Theatre of Chester because it specializes in productions of small cast, one set plays which focus on ideas and character over spectacle. …Discord is a fine opening for their 2015 season, continuing that tradition with a fresh and thought-provoking piece of intellectual theatre.