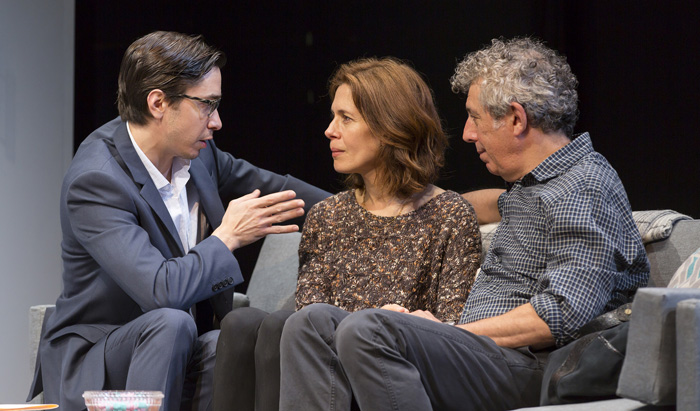 As I settled into my seat for the world premiere of Daniel Goldfarb’s Legacy, I was impressed enough with Dane Laffrey’s set to jot, “Smart, creamy, winter white with touches of gray and blue, cool blue lighting [by Justin Townsend]….” This apartment, neatly organized, almost pristine, had a Scandinavian air.

Not long into the first act, I decided that the set was utterly wrong for the play, and in some ways emblematic of what I found disappointing in the production. Too many components just don’t mesh, though there are many moments of brilliance. With apologies to Aristotle, I found the whole of the play lesser than the sum of its parts.

Neil (Eric Bogosian), a literary lion well into his sixties, and his younger-by-several-decades wife, Suzanne (Jessica Hecht), married for 17 years, are scholars ensconced in an apartment in (where else?) the Upper West Side of Manhattan. Neil suggests a hybrid of Philip Roth and Norman Mailer, with his bellowing talent and testosterone-tinged sense of entitlement, but though we hear the words, we don’t hear what’s beneath them. Bogosian, for whose body of work I have much admiration, is far too laid-back and monotonous to inhabit Neil, a man whose latest novel has just received a scathing review in The New York Times. The words he utters are those of an very successful artist in crisis, someone whose sense of self and his place in the world has been shattered. Bogosian’s declarations about failure and desperation seemed more kittenish than leonine. His performance is so understated that it’s one-dimensional.

Suzanne springs from the other side of the compass. She works for what is referred to as “The Spielberg Project,” interviewing Holocaust survivors, and from their stories she derives a magnificent love of life. Hecht plays her exquisitely, with delight and spontaneity. She shares her discoveries with Neil, cheerfully assembling a bagel and lox for him as she talks about the most recent survivor she’s interviewed, whose recollections were “so fucking powerful,” whose will to live kept her going through a “whole smorgasbord of horrors.” Caring, life-affirming, empathetic, she is, or should be, the ironic yin to Neil’s yang, if Bogosian’s character were fully fleshed. Neil’s insistence that he and Jessica have a baby to cure what ails him is heavy-handed and cliched, and the message, along with the unfolding of the play, is unfortunately contrived.

There is much talk of Neil’s disorganization and messiness, and to help him get organized, Suzanne hires one of Neil’s graduate students, Heart (Halley Feiffer), to assist in putting his papers in order. But on this set there is no evidence of clutter, and it is just not the home of a bookish New York couple. For the early scenes between them, Suzanne and Heart place a neat pile of papers into a box. The disconnect between what we see in this apartment and what we are told, undermines the play, as, in my opinion, does the script, which is predictable and too close to a sitcom for my comfort.

That two wonderful performances arise from such a predictable script is a testament to the talent of the actors who create them. Along with Hecht, Justin Long as Dr. Goodman dazzles, at once hilarious and poignant, and I eagerly anticipate seeing him onstage again.