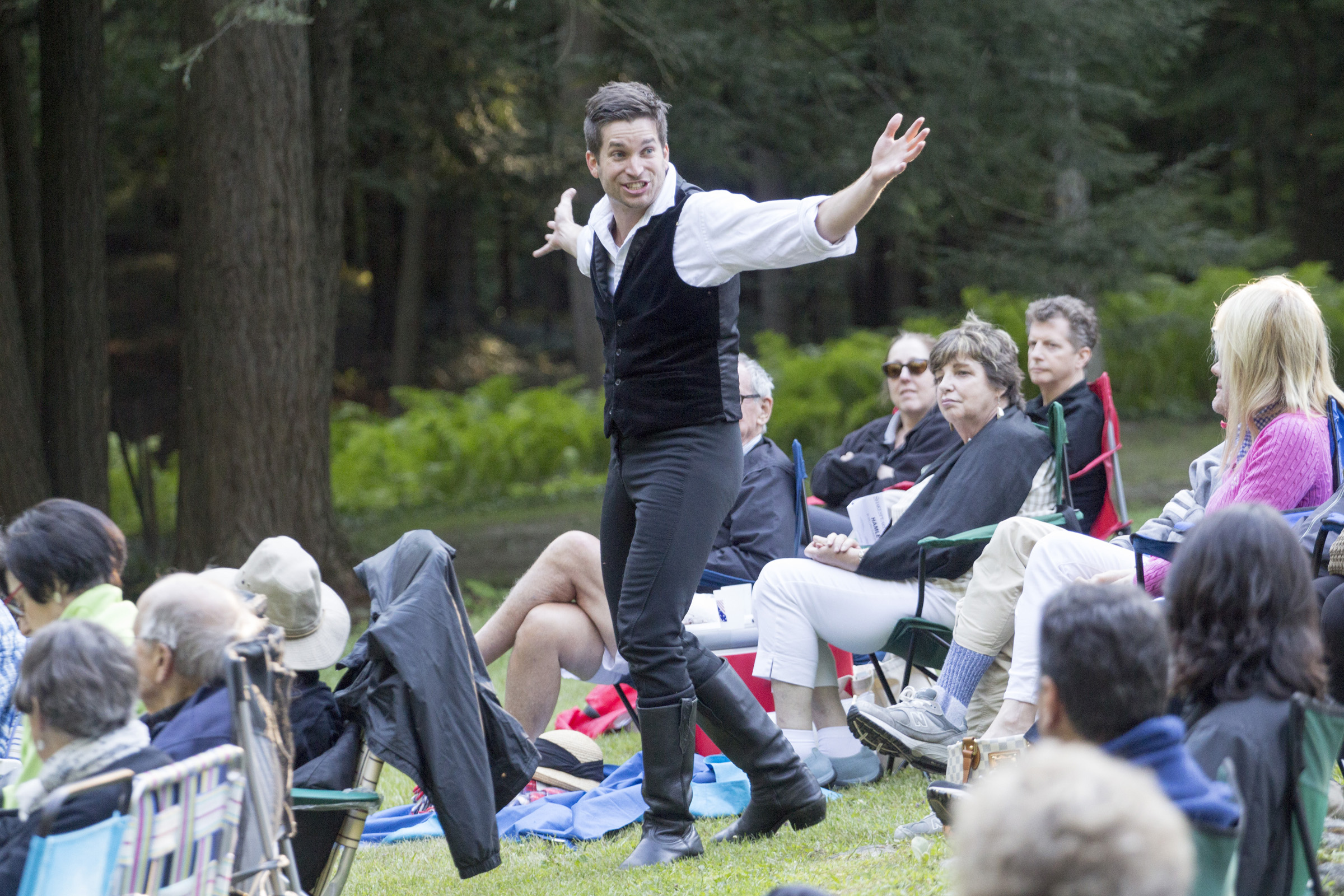 Only a young cast like this could bring out the essence of Hamlet so brilliantly
Theatre Review by Gail M. Burns

This production shows why I hate doing those crystal-ball style predictions at the start of the season, a task we critics are too often called upon to perform. Out in the daylight, pared down to under two hours (a full staging of Hamlet can run close to four hours), and performed by a lively young cast of seven under the expert directorial hand of Jonathan Croy, this production brings the essence of Hamlet to vivid life and reminds us that the melancholy Dane and his cohorts – Laertes, Ophelia, Horatio, Rosencrantz, and Guildenstern – are all college students, the same age or even slightly younger than the 20-somethings portraying them here. This is the story of a young man coming of age bearing the burden of avenging his father’s murder amidst the sting of his mother and uncle’s betrayal. His madness – half-feigned, half the very real result of what we would today call PTSD – designed to bring his uncle to justice, wreaks havoc on all around him.


Of course you also have those same 20-somethings playing the doddering and garrulous Polonius (Greg Boover), the devious Claudius (Colin Gold), and the lusty Gertrude (Concetta Russo). Only Boover is called upon to do double duty as a younger character, offering a straight and solemn Horatio as well as assaying a few minor parts. Gold plays both Claudius and the ghost of his late brother, Hamlet’s father. Russo gets to cover up Gertrude’s royal robes and literally get down and dirty as the Gravedigger in an earthy comic turn.

Luke Reed plays only Hamlet while the rest of the cast swirls and morphs around him. The pared down script means that he spouts a torrent of Hamlet’s Greatest Hits over the course of the hour and forty-five minute intermissionless run of the show. He is a handsome and engaging young actor, whose talents on stage and off are proving invaluable to this Company.

Peter G. Andersen is a fiery Laertes, and Ally Allen embodies the fragile beauty of Ophelia, who is probably the youngest of Hamlet’s acquaintances. Since women generally did not receive a university education in Shakespeare’s day (Hamlet is based on a very old legend and the play is not set in any specific time period, but since the protagonist is a student at the University of Wittenberg which was founded in 1502, we can assume that Shakespeare intended the setting to be in his present day), and were married as soon as they were of child-bearing age, Ophelia is probably about fifteen or sixteen, which explains her reliance on her father, brother, and suitor for guidance, and her complete collapse when they fail her.

Mairead Koehler, Alli Weinstein and Zoe Wohlfeld assist in minor roles, as do many of the other more prominent players.

Croy’s direction is a big as all outdoors. Actors enter from every angle through the woods and through the audience seated in the field. Be prepared for performers with books and swords running and walking amongst you, and occasionally helping themselves to some of your snack food. The setting at The Mount, with a stand of handsome, mature trees surrounding the playing area, is lovely, and the actors all speak very loudly, clearly, and slowly thanks to the excellent vocal training they receive at Shakespeare & Company. The majority of this cast are products on the Company’s extensive education program, some of them from their childhoods here in the Berkshires, and are a fine advertisement for the same.

Govane Lohbauer has designed gorgeous Regency style costumes for this production, none more stunning than the one for the ghost. To see Gold emerge from the woods shrouded from head to toe in yards of trailing lavender grey gauze is a monumental effect. Luckily Elizabeth Aspenlieder has captured the moment on camera for you to see here, but I highly recommend seeing it in person.

This is outdoor theatre and while the setting is pastoral in the extreme, The Mount is just off of Route 7 and the sounds of 21st century culture are annoyingly present. Small planes, probably taking off from the Pittsfield or Great Barrington airports, whined noisily overhead on the crystal clear July morning when I attended. And sounds of ongoing maintenance to the grounds and buildings at The Mount combined with the ubiquitous sounds of cars and trucks revving up after stopping at the light where Kemble Avenue and Plunkett Street cross Route 7. These are inevitable intrusions on unconfined theatre in the open air.

The Company provides lawn chairs, but you are free to bring your own. Because most audience members are in chairs, you may have a hard time seeing if you elect to bring a blanket and sit on the ground. I attended an 11 am performance on a brightly sunny day and was VERY glad of the broad brimmed hat I had packed. Sunscreen, sunglasses, and a hat are a must for morning performances, as I imagine insect repellent is for the evening ones. But the relaxed picnic atmosphere is most enticing providing you prepare properly.

I will never understand why people bring very small children and pets to outdoor theatre. Just because it is out of doors, it is still Hamlet and your four-year-old will neither understand nor enjoy it. They will want to run around and ask loud questions and get in a snit when you shush them. At the performance I attended a most noble poodle was justifiably alarmed when an armed and shouting soldier dashed past his mistress’ picnic area and took appropriate action, which caused the actor to become justifiably alarmed in return. Pets don’t get that it’s theatre. Don’t bring them.

Those caveats aside, this is one of the more delightful summer offerings in our region. I highly recommend planning a day at The Mount that includes a few hours spent with the Bard. It is a unique Berkshire experience that you can enhance with lunch or dinner at a local restaurant or a picnic of locally sourced delicacies from Guido’s.

Shakespeare & Company presents Hamlet by William Shakespeare; Directed by Jonathan Croy; Set and Sound Design, Jonathan Croy; Costumes, Govane Lohbauer; Stage Manager, Kathleen Soltan. Cast: Ally Allen Ophelia, Rosencrantz, and Osric; Peter G. Andersen as Laertes, Marcellus, and the Player King; Greg Boover as Polonius, Horatio, the Player Queen, and Luciano ; Colin Gold as Claudius and The Ghost; Mairead Koehler as a Lord, Luke Reed as Hamlet; Concetta Russo as Gertrude and The Gravedigger; Ali Weinstein as a Lord; and Zoe Wohlfeld as Guildenstern and a Lord. Running Time about one hour and forty-five minutes with no intermission, performed at The Dell at The Mount, 2 Plunkett Street, Lenox, MA, from July 16-August 22, 2015. shakespeare.org edithwharton.org 413-637-3353