Full of heart, “Frankie and Johnny in the clare de lune” is well worth seeing 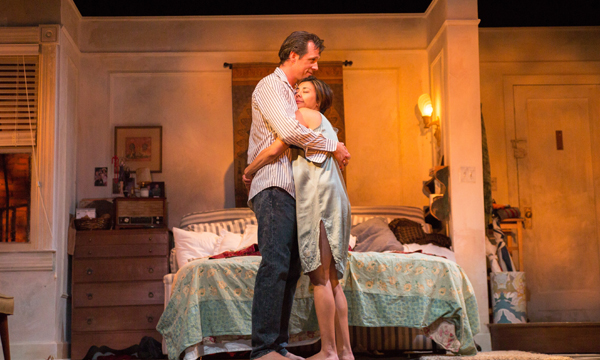 Full of heart, “Frankie and Johnny in the clare de lune” is well worth seeing

In his play about a failed actress turned waitress and a short order cook who quotes Shakespeare, Terrence McNally has peopled his play Frankie and Johnny in the clair de lune with two interesting characters. And very little plot. When it comes to classic love affairs, Frankie and Johnny tales are numerous, and in this case the tragic and doomed love affair is reimagined as a one night stand that turns serious.

With the lights and classical music turned down low, the audience giggles, then laughs as this tale begins with the sounds of steamy sex and a series of ever more intense moans and groans emanating from beneath the sheets. We hear (but do not see) Frankie (Angel Desai) and Johnny (Darren Pettie) consummating their mating in a big bed that dominates the set. Resplendent and massive, it takes up what seems like half the fifth floor walk-up tenement that is Frankie’s home. Sex over, she wants to send Johnny on his way so she can enjoy the rest of the evening watching tv and eating ice cream. Out of the blue Johnny announces he wants to spend the rest of his life with her, raise a family, and have nonstop sex. She is having none of it.

That is the gist of the story which can be summarized even more simply. In the first act Frankie makes him a meatloaf sandwich, and in the second act he makes her a western omelette. He has a beer with a milk chaser as he engages in grandiose sentiments and she is having none of it.

Following the sex there is some “tasteful” nudity – a trademark of the Berkshire Theatre Group which never gets gratuitous about such things – the two restaurant workers prowl about the flat, he in his working class undershorts, she in her robe. The two seem so ordinary on the surface, but McNally provides them each with a complicated past, and it is the drip-drip revelation of the details that are at the heart of this play. The coincidences pile up as the two find they can both claim Allentown, Pennsylvania as their childhood homes. Less encouraging is that each of the pair has previous relationships that did not end well. Like a volcano erupting, Darren Pettie’s Johnny provides a series of verbal thrusts that Angel Desai’s Frankie does her best to parry and deflect. She demands he leave. He demands more time in bed.

And so it goes for two acts.

Visualize Kathy Bates playing Frankie and F. Murray Abraham as Johnny in the original 1987 production and you can intuit the reason it played off-Broadway for so long. In this romantic comedy it’s the coming together of such a dumpy waitress and unkempt cook that makes this play such fun. Instead of two actors with stunning physical attributes, we enjoy the romantic exploits of this couple who, together, might barely score a 2 or 3 on the proverbial scale of 10.

For the film, Michelle Pfeiffer and Al Pacino took the roles of the reluctant Frankie and determined Johnny as their romance bloomed. The film fizzled, the pair was too attractive.

Directed by Karen Allen, the casting of Desai and Pettie opted for the more Hollywood sensibility, and lessened the contrast in McNally’s play. The plain-folks nature of his tale is important, and while he begins with passionate lovemaking he ends it with the pair casually brushing their teeth together, about as un-Hollywood ending as one could imagine.

The acting skills of Desai and Pettie managed to pull it off on both the physical level – Johnny’s body was just beginning to sag, while Frankie’s bruised personality was off-putting as she crudely repelled his overtures.

Production-wise, John McDermott managed to create a schlumpy flat that fit the story quite well, as did the minimal costumes by Hunter Kaczorowski. The constant stream of music that was a soundtrack for the lovemaking and negotiations was the work of the always competent Scott Killian.

Frankie and Johnny in the clair de lune is part comedy, part tragedy and all heart, a play well worth seeing.