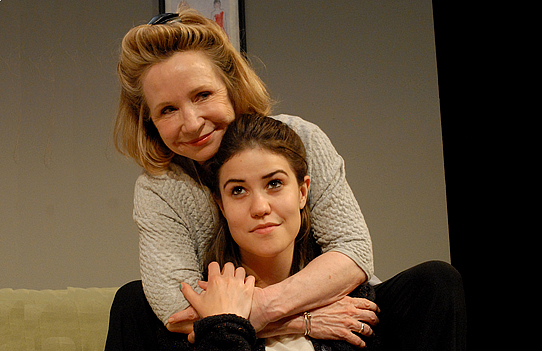 Kathleen Tolan’s Memory House brings not only realism, but authenticity to the stage
Theatre Review by Gail M. Burns

It is New Year’s Eve and Katia’s college essay must be postmarked by midnight. Like many high school seniors in the aggressively academic world of NYC college prep schools, she is in a panic over the whole college application process. Life will change dramatically for her in the coming year, and she is terrified.

Life has already changed dramatically once before in her life, when she was adopted by an American couple from the Russian orphanage where her birthparents had left her – her birthmother dead and her birthfather MIA. From the size of the dress she was wearing on the day of her adoption, she was somewhere between 3-6 years old at the time. Old enough to have memories, and that is what her college essay must be about – her “memory house.”

On this New Year’s Eve, Katia (Caitlyn Griffin) is at her mother’s apartment, her adoptive parents having divorced, hiding from her tenured university professor father who calls insistently. Her 50-something adoptive mother, Maggie (Debra Jo Rupp), was once a dancer and is now under-employed as an office worker. This evening, she decides to bake a pie for the first time, from scratch. It is a good enough distraction from Katia’s anger and angst, all of which is directed at Maggie in typically teenaged fashion.

Memory House shows us ninety minutes of this evening in real time – although I am not at all sure you can bake a blueberry pie from scratch in that amount of time – and as directed by Sheila Siragusa and performed by Griffin and Rupp at the Chester Theatre Company, it is realistic in the extreme. Playwright Kathleen Tolan has crafted dialogue that sounds exactly like a real parent/teen interaction, and its realism extends to exclude all the exposition a real life would naturally omit, which means that there are gaps in Katia and Maggie’s stories. The characters and acting are so strong that you can enjoy the play without knowing every detail, but there will be questions in your mind afterwards.

Rupp is the perfect person to portray Maggie. Her performance is so genuine that there were moments I really believed that she was saying those words for the first time. Griffin, a rising senior at UMass Amherst and a theatre student of Siragusa’s, has a much less sympathetic character to portray, but she does a good job of helping us like and understand the good person Katia is and the great woman she will undoubtedly become – a great woman just like Maggie.

I have only just become aware of the movement amongst adopted individuals that their adoptive parents have ripped them away from and denied them their native culture experiences, and I have to say that I am deeply puzzled by it. Most adoptive parents have only the best intentions when they bring a child into their family and there is nothing preventing an adopted person from reconnecting with his/her native culture as an adult. Instead of being denied a cultural experience, it seems to me that they have the joy of being able to claim two cultures as their own. But in the time we get to know Katia she is feeling the full brunt of being a woman without a country, and without a past and culture that she can remember and call her own. She is also a teenager about to mail off a piece of writing which will set in motion a cascade of changes in her life and propel her out of adolescence and into adulthood.

Rupp also has the challenge of, apparently, crafting a pie on stage. In this she is no doubt greatly aided by stage manager Alexander Hall and the run crew who make sure each prop ingredient and mixing tool is in exactly the right place on Geoffrey Ehrendreich’s delightfully cluttered set complete with working sink.

Chester is running a special to encourage moms, to bring their daughters to see Memory House. Any Friday or Saturday night during the play’s run your ticket is half price with the purchase of your daughter’s full price ticket. This is lovely and I encourage you to take advantage of it, but as the mother of sons I feel slighted, especially since I could hear Maggie and Katia speaking the very same words to each other that my sons and I have exchanged on many adolescent occasions.

And, while I wish this was not still a thing to be remarked on, Chester is to be congratulated for staging a play about women, written and directed by women. I very much enjoyed the 100 minutes I got to spend eavesdropping, as it were, on Katia and Maggie. Such fine performances in this tender little play are not to be missed.