Review: Regional premiere of ‘john & jen” at the Theater Barn, a sung-through musical 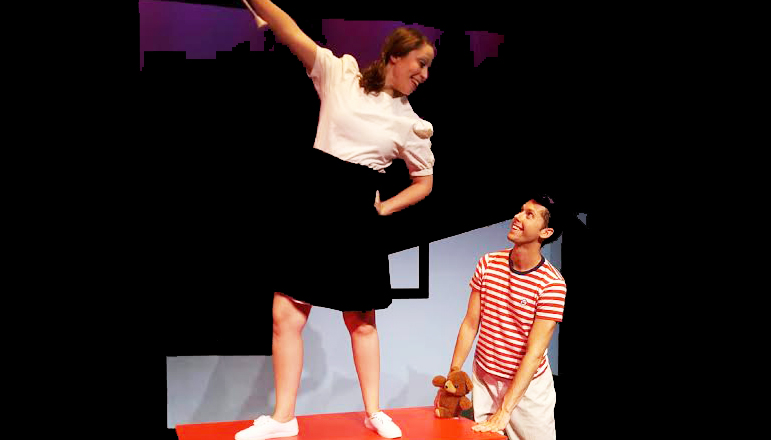 Review: Regional premiere of ‘john & jen” at the Theater Barn, a sung-through musical

john & jen is the area premiere of a melancholy little musical about a woman who spends her whole life, well, the first forty-five years at least, trying desperately to take care of the men in her life, only to have them either fail her or reject her smothering efforts. Over the course of the show we learn next to nothing about her – her desires and dreams and talents – but we learn all about them. You will not be surprised when I tell you this show was written by two men, composer Andrew Lippa and lyricist Tom Greenwald.

The woman’s name is Jen and the men with whom she struggles are her unseen, unnamed, and physically abusive father, her six-years-younger brother, John, who is killed in Vietnam at the age of 19, her son, also John, and Jason, the father of her child, who is never seen on stage or in the child’s life. The show takes place over the course of 38 years – 1952-1990 – and is set primarily in the United States, although the first scene of the second act occurs in Canada, where Jen and Jason have moved so that he can avoid the draft. In this solid production at The Theater Barn Caitlin Mesiano plays Jen and Michael Luongo plays her brother John in Act I and her son John in Act II.

The show, which is sung through, rests squarely on Mesiano’s shoulders. Where Luongo is only required to play both Johns from birth to age 18/19, Mesiano has to take Jen from six to forty-four. I am guessing Mesiano is not yet 30, and both age extremes are a stretch for her. Her voice is naturally fairly high and nasal, and her exaggeration of these traits when she was playing Jen as a child was grating. But since, as I mentioned earlier, Jen is not a well written or fully fleshed out character, there are grating and pathetic moments built right in, and Mesiano does a heroic job of bringing emotional depth and sympathetic interest to this tragic woman.

Luongo gets to have much more fun, playing the lively and impetuous Johns, both of whom, like Peter Pan, remain boys forever in this story.

I could find no proof that this show is in anyway biographical or autobiographical for either Lippa and Greenwald, and as a result the plot is fairly generic. John and Jen lead a predictable childhood from 1952-1962 in the suburban America where gender lines are strictly drawn and abuse is never discussed. Jen escapes to college in New York City from 1964-1970 (she does the six-year plan, her brother jokes) during which time she predictably experiments with sex, drugs, and anti-war protests. Left alone at home, John sides with their militaristic father, a World War II veteran, and decides to join the Navy immediately upon graduation from high school, although it would have been more predictable, and more dramatic, if he had been drafted. Jen and Jason decide to immigrate to Canada so he can avoid the draft, and the split between the siblings is predictable. And then John in killed in action.

So in Act II Jen predictably names her son after her dead brother, dresses him in all of his late uncle’s old baby clothes, and gifts him with all the elder John’s toys. Removing her son from his father – Jason stays in Canada – and discouraging him from developing a relationship with her father, Jen devotes herself raising her John as a more perfect clone of her brother. But no matter how she raises him and for what reasons, children naturally rebel against their parents, and if you have raised your child in isolation, that makes the inevitable leave taking that much more painful. John the Son is accepted to a writing program at Columbia and, like his mother, leaves the suburban nest for the wild life in New York City at the end of the play.

There are many local connections and coincidences aligned with this production. Director Trey Compton, who has had a long association with The Theater Barn as an actor and director, had been suggesting john & jen to producer Joan Phelps for a while, but she first heard of the show back in 1990 when Andrew Lippa was acting at The Barn (playing The Boy in The Fantasticks, among other roles, a show which happens to come up next on the schedule this summer) and played her a song from the new musical he was working on. The show went on to be produced by the Goodspeed in 1993, and then was workshopped in Stockbridge at the Berkshire Theatre Festival (now the Berkshire Theatre Group/ BTG) in 1994, before opening off-Broadway for a six-month run in 1995, starring Carolee Carmelo and James Ludwig. Ludwig appeared last month at the BTG’s production of Bells Are Ringing, which starred Kate Baldwin, who just finished a run as Jen in the 20th anniversary revival of john & jen in New York this spring. Compton and his cast took a field trip over to the Colonial in Pittsfield to see Ludwig and Baldwin, and had a chance to talk with Ludwig about the development process of the show. This is the second of Lippa’s shows The Barn has produced, last summer they presented his best known musical, The Addams Family.

If you go to john & jen expecting a musical comedy you will be disappointed. It is really a little opera with all the sturm und drang associated with that art form. There are few laughs to be had. Compton’s direction keeps the action moving fluidly and Musical Director Kevin Francis Finn provides concise keyboard accompaniment for Mesiano and Luongo’s energetic portrayals, but the problem lies with a story that offers little catharsis or hope for poor Jen.