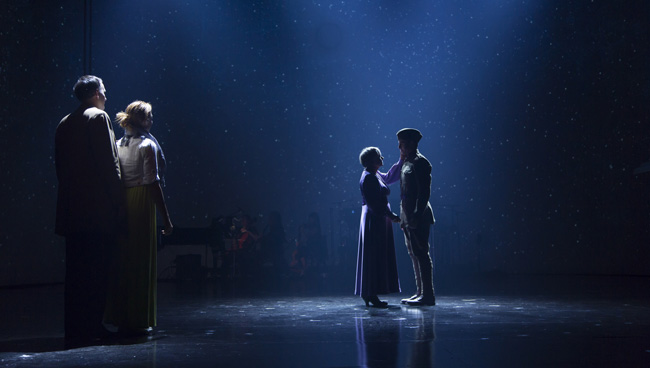 Collaboration is the key to a successful musical, and when the late Nicholas Martin anointed the team behind Unknown Soldier to “do something together” while at the Huntington, Michael Friedman (music and lyrics) Daniel Goldstein (book) began the journey that ultimately created Unknown Soldier, now getting its world premiere production at the Williamstown Theatre Festival. Even director Trip Cullman who joined the team a bit later in the process has helped make the trio of creatives ready for prime time.

When you arrive at the theatre, the stage is already set as the research library of Cornell University and with the movement of furniture and boxes, it morphs into the various settings of the play, from the kitchen table of a house in Troy, NY to the cavernous main hall of Grand Central Station in New York City and the examination room of the hospital. The action is brilliantly layered throughout the musical with key scenes taking place downstage as the hustle and bustle takes place upstage,and a five piece musical combo accompanies the songs from behind a sheer curtain at the very back of the stage.

The story is complicated, taking in four generations of Rabinowitzes and Andersons but comes down to this: Ellen Rabinowitz has inherited her Grandmother’s house in Troy, New York – the house where she grew up and ran away from as soon as she could. When cleaning it out, Ellen discovers a picture of her Grandmother Lucy, as a young woman, ripped from a magazine, sitting next to a man, having a picnic – the caption, “Has Unknown Soldier Found True Love?” As she tries to discover the identity of the man in the picture, she uncovers secrets about her Grandmother Anderson and about herself, and has to choose what to remember and what to forget.

Composer Michael Friedman who is best known for Bloody, Bloody Andrew Jackson (developed on Broadway with Jenny Gersten as Associate Producer) smashed my expectations by completely abandoning the rock basis he used for that score and instead channeled some real Broadway sounds which at various moments echoed the styles of Stephen Sondheim and Adam Guettel, though always remained his own original creations. With young Ellen’s opening notes (Clara Young) we learn about the family involved, and when Francis Grand (Derek Klena) the soldier with amnesia (we would call it PTSD today) sings his first plaintive notes on how “The People Stare” and continues on to wonder “What’s My Name” we are soon swept up in this mystery story about the history of this enlisted man, his romance with Lucy and his being reunited only to be wrenched apart again when she becomes pregnant. Derek Klena radiates both the confidence of a military man and the vulnerability of a shell shocked lad, all sung with a clear, wholesome voice befitting his character.

When Estelle Parsons is on stage as Lucy Anderson – bracketing the beginning and ending segments – the energy level went up several notches. You just can’t beat a veteran actor who knows how to command the stage without ever upstaging anyone else. She is remarkable as both singer and actor and beloved by the Williamstown audiences.

The choreography by Patrick McCollum is quicktime hustle and bustle for the most part, with far more people parading upstage than are credited in the program – the work of the company’s apprentice program no doubt. While many of the sequences are flashbacks to the style and fashion of the 1920’s and a credit to costume designer Clint Ramos, they can also be viewed as tintypes come to life, and as the characters ebbed and flowed throughout the show, bits and pieces of the City of Troy, often in miniature form, joined the hospital, the train station, the kitchen and the library. Each comes into being and then dissolves, as if into thin air. The smoothness of the whole is impressive, filled with a thousand details, all just inches away from disaster with each complex entrance and exit.

While I am not very sure of the song titles used here (there was no program listing them, something most companies provide in their programs; a frustrating omission likely due to the fact that the program goes to press long before the show itself is locked and the songs finalized) they were quite wonderful. Ranging in style and tempo from romantic ballads to vaudeville ditties like “Start All Over” and “Mental Amnesia” they were incredibly varied as well. One song, “I am Your Lucy” caused echoes of Sweeney Todd in my ear.

Unknown Soldier, the new musical by Michael Friedman and Daniel Goldstein has, like most musicals, been in development for a long time. It began its life in 2008 and 2010 as part of the Huntington Theatre Company’s Breaking Ground reading series, the earlier directed by Will Friers, the latter by Goldstein himself. It then was presented as part of Eugene O’Neill Theater Center’s National Music Theater Conference June 25-July 15, 2011, directed by Laura Eason at the annual conference. It then was worked on as part of the McCarter Theater’s Sallie B. Goodman Artists retreat in 2012 before moving on to two readings in 2013-14 under director Trip Cullman at the Manhattan Theatre Club which undoubtedly led to its current presentation under the watchful eye of Mandy Greenfield who was artistic producer of MTC before taking the reins of the WTF.

All this refining and experimentation led to the offer to prepare a full production of Unknown Solder at the Williamstown Theatre Festival. The final result now on stage at the Nikos is a must-see, for other than an overly long and monotonous “Milkshake” and picnic sequence about a second romance with the Cornell researcher who helps unravel the mystery, the whole enterprise moves along swimmingly. The section that drags has the least interesting music – more sung speeches than anything else – and there is no spark between Andrew (Erik Lochtefeld) and Ellen Rabinowitz (Jessica Phillips). It drags on for far too long.

Other than that single section, the musical weaves its tapestry of love, life and death with near perfection. The music under the direction of Marco Paguia is well balanced to each actors voice, and includes in the instrumentation both a violin and cello to help underscore the romantic and heartbreaking moments that prevail through most of the story. The orchestrations that Paguia and Friedman have devised are never showy, yet enhance all the important moments.

Mixed in with the tale of the amnesiac soldier and the grandmother are two vaudeville numbers which serve as light diversions from the more serious drama taking place on stage. Reminiscent of patter songs and the Loveland section in Follies though on a smaller scale, you will have to decide whether they serve any purpose than as a palate cleanser. And if one is really needed. There’s no accounting for taste, so if you like garish costumes and silly lyrics, this could be the top moment for you.

Given all the time, love and energy invested in this show, and the brilliance of the way its story is told, it is for all my quibbles still a big winner. In future productions it is hoped that the focus would concentrate on its most endearing character, the Unknown Soldier. It is his story which is not only in its title, but at its heart. The moments when he sang and interacted with people were spellbinding. Let the other romance – a bit of a contrivance to begin with – become a less important subplot. And while we are at it, lets relegate the song and dance team to the trashbin of out of town tryouts.