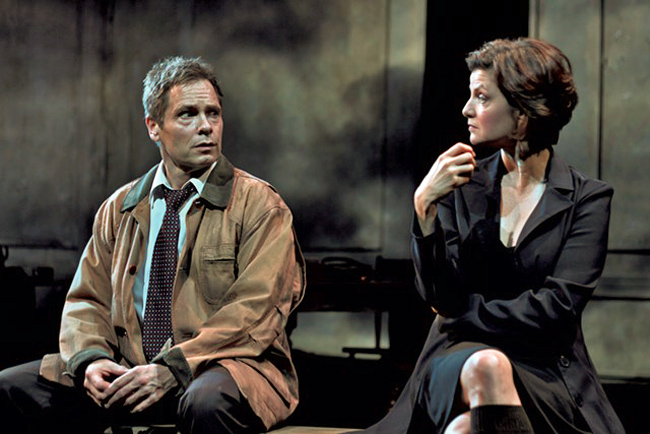 Jonathan Hogan and Michael Hayden in Outside Mullingar.

Michael Hayden and Mary Bacon in Outside Mulliingar.

All photos by Mairi McCormick

There has been a lot of excitement over the current Dorset production of John Patrick Shanley’s Outside Mullingar – indeed the playhouse was as full as I have ever seen it at the matinee I attended, and the audience was enthusiastic and appreciative. The show ended its limited Broadway run a mere 18 months ago, and Dina Janis was quick to pounce on the rights to the regional premiere, bringing in a Broadway-caliber cast and crafting an innovative production design calculated to attract savvy theatregoers, fans of Shanley, and folks who simply enjoy a moving tale told with humor and compassion.

Upon turning 60 in 2010, Shanley’s thoughts turned to his Irish roots and he decided to write a play about the family farm, which he had visited at the insistence of his father many years earlier. His March 2013 New York Times Op-Ed piece The Darkness of an Irish Morning, detailing that trip was written during the lead up to Outside Mulligar’s New York production at the Manhattan Theater Club. It is reproduced in its entirety (and in a very small font) in the Dorset program, and clearly outlines the autobiographical nature of the play. During that same time period, Shanley took a similar trip back to his ancestral lands with his own son, Nick, along with the director and designer from MTC, which he also chronicled for the Times.

Set in the Irish Midlands from 2008-2013, Outside Mullingar is a simple love story between two hopeless shy and repressed people who have managed to get clear into their 40’s without admitting to a love that has existed since they were children, despite the fact that their farm lands are contiguous and there is a long-standing land feud between their families. We meet Anthony Reilly (Michael Hayden) and Rosemary Muldoon (Mary Bacon) on the day of her father’s funeral. Their surviving parents – her newly widowed mother Aoife (Jennifer Harmon) and his long widowed father Tony (Jonathan Hogan) – set the scene. Instead of leaving the farm to Anthony, Tony is planning to sell it to an American nephew, who claims he wants to come to Ireland and “marry Irish.” But the Muldoons own a strip of land separating the Reilly farm from the road, making it necessary for them to open and close a pair of gates as they leave from and return to their home. The American nephew won’t buy the farm without the right of way, which, it turns out is owned by Rosemary, not Aoife, and she will NOT sell.

Over the course of a few scenes that cover five years during which Aoife and Tony also pass away and Rosemary and Anthony become the sole owners of their adjacent family farms, we see them fight and block each other at every turn. Finally, they manage to connect in a conclusion that is heartwarming and thoroughly satisfying.

This play clearly comes from deep inside of Shanley, and it is beautifully written with lots of laughs amidst all the repressed longing. The cast is superb and the direction by John Gould Rubin is deft. Bacon and Hayden bring a deep energy to their scenes together, especially the long final one during which they finally, desperately manage to find a way to come together.

But Hayden shares another deeply moving scene with Hogan, as Tony prepares himself, and Anthony, for his own impending death. The scene is played on and in Tony’s bed and for a long while two men just hold each other as they talk, in a way that a father and grown son seldom do. It is infinitely touching.

So the play works – the actors, their movements and interactions, the words they speak. What didn’t work for me was the carefully constructed physical setting of the play. Outside Mullingar is set in an Ireland where the rain and fog are constant and the sun never shines. It calls for at least five distinct sets – the kitchens of both farmhouses, a bedroom, and two exteriors – which makes this an expensive production despite its small cast and modest run time. In order to make it affordable, Rubin has worked with set designer Narelle Sissons, lighting designer Michael Giannitti, sound designer Ryan Rumery, and projection designer Kevin Ramser to create a single set to represent all of Shanley’s sodden Ireland, and for me it just didn’t work. Three grimy gray walls create a single mammoth room, which dwarfs the modest interior furnishings hauled on and off by stagehands. While the walls act as admirable screens on across which Ramser sets clouds scudding and wheat waving, they are just too big and completely out of character. “Why are these Irish farmers all wandering around inside the long-neglected ballroom of a derelict mansion with an earthen floor?” I kept thinking. The set does have a claustrophobic feel to it – there is just one window in all those walls – but not enough so. Anthony and Rosemary’s lives and desires are so tightly confined that setting them adrift in even one small stage full of open space is too much.

Shanley has made much of his own Irishness, and much has been made about how authentically Irish this play is. One of the primary concerns the Dorset team had in creating the physical look of this production was to prevent it from becoming too stereotypically Irish in a Lucky Charms sort of way. But having seen several truly Irish plays, most recently Shining City by Conor McPherson, I can tell you that Shanley’s Ireland exists only in his dreams. It is a fine dreamscape, and he makes it work, but it is not a realistic portrait of modern day Ireland. Shanley is an American playwright and this is an American play. The Irish accents are rather hit and miss, which is not surprising since there doesn’t seem to have been a dialect coach on board.

But for all that, I predict that Outside Mullingar will become as popular on the regional and amateur theatre circuits as its more lauded predecessor, Doubt, but I am quite sure there will not be many productions better cast than this one. I encourage everyone to hurry up to Dorset now and see this gem.