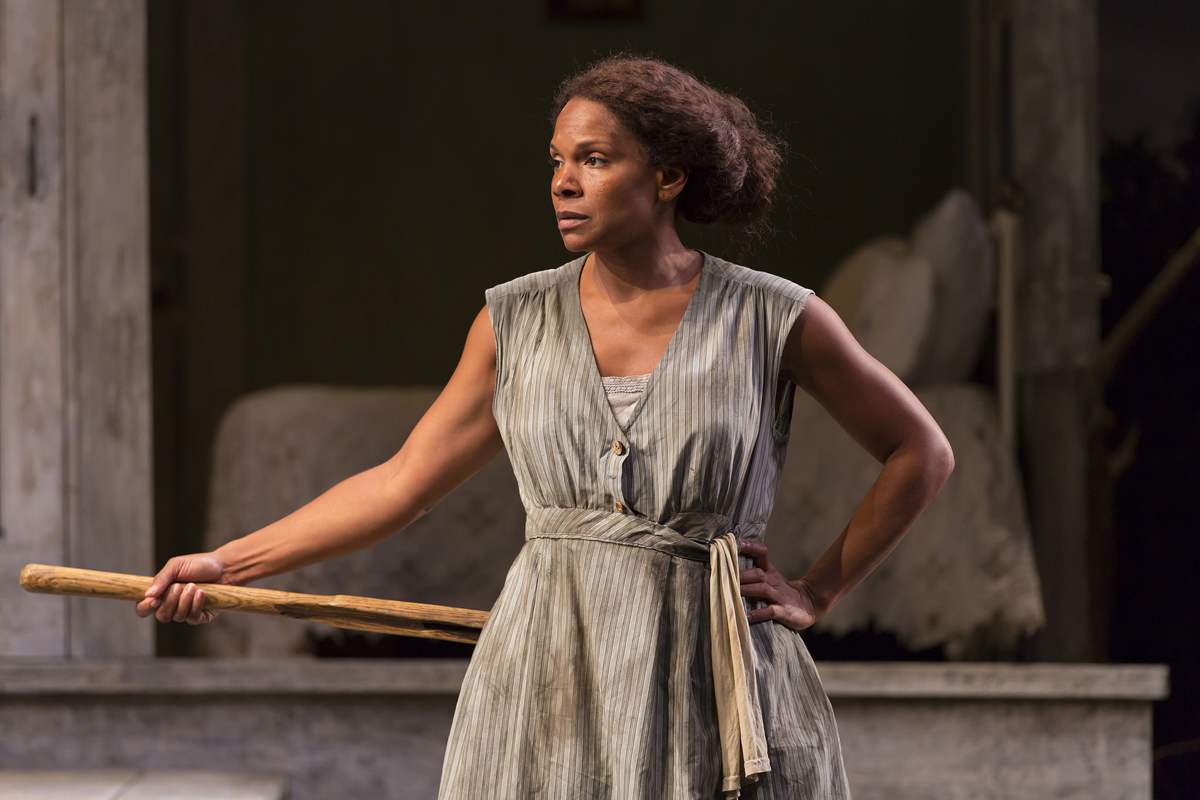 Eugene O’Neill describes Josie Hogan as having the map of Ireland stamped on her face, a woman of Amazonian proportions, nearly six feet tall and 180 pounds. (A Moon for the Misbegotten is set in 1923, when a woman of that size would have certainly been unusual.) With her brash persona, and her boasts of multiple sexual flings, she puts on a fearful show, and though I’m a big admirer of Audra McDonald, I had concerns that the beautiful, elegant actress would be miscast, a distraction.

But McDonald is bigger than that, figuratively speaking. In this heart-wrenching production at the Williamstown Theatre Festival, McDonald makes Josie her own, and the raw honesty of her Josie is magnificent.

The entire cast is superb. Josie and her father Phil (the great Glynn Turman) are tenant farmers living in a shack on the the estate now owned by James Tyrone (Will Swenson, who also happens to be McDonald’s husband). Tyrone is a dissipated alcoholic, a womanizing Broadway actor whom O’Neill modeled after his brother, the same James Tyrone from A Long Day’s Journey Into Night. With his elegant attire and fine manners, it would seem odd that James is drawn to the rough-hewn Josie, and that she is in love with him, but the beautifully crafted play brings us to an unforgettable understanding of their mutual love.

Director Gordon Edelstein has taken a bold step in casting the Hogans as an African-American family, and it pays off. I did hear an audience member gasp “Connecticut?” when the location of the play was mentioned, but I suspect that she was unfamiliar with the play and confused by Turman’s southern accent, which I found entirely appropriate for the time and place and the back story of his character.

“Nothing has a stronger influence psychologically on their environment, and especially on their children, than the unlived lives of the parents,” wrote C.G. Jung. This is a play about family scars; even more, it is a play about love in its purest state, in the midst of degradation and loss. It concludes with an act of love that left me breathless, and so thankful for McDonald’s glorious gifts.

The technical side of this production is as luminous as its cast. With a set originally designed by the renowned Ming Cho Lee (beautifully restored and adapted by Lee Savage), lighting design by Jennifer Tipton, and sound design by John Gromada, all aspects dovetail seamlessly with the action onstage.

O’Neill is daunting territory to explore, and many avoid his work because of his reputation for prolixity. Watching an O’Neill play can be an uncomfortable experience for an audience when it’s in the hands of lesser actors. At around two hours and 45 minutes, Moon is one of his shorter full-length plays. I would urge you, if it is still possible to get a ticket, to witness the beauty and depth of A Moon for the Misbegotten that not only honors O’Neill, but transmits all of the humanity this play so richly deserves.