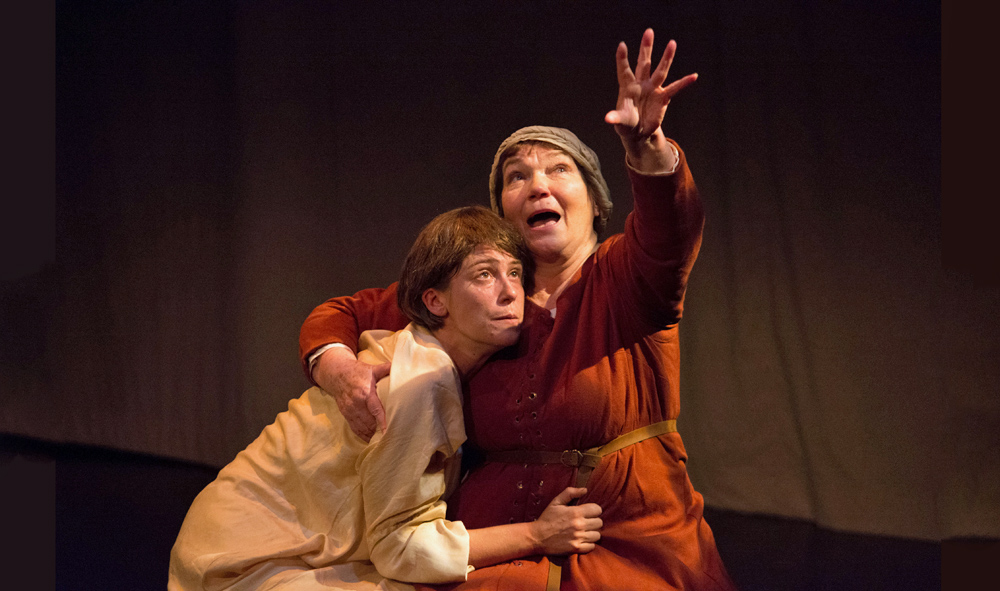 Ever heard of Isabelle Romée (1377–1458)? She was married to a man named Jacques d’Arc and they had a daughter named Jeanne, known in English as Joan. Joan d’Arc. Joan of Arc. The Maid of Orleans. Saint Joan.

I had always been presented with Joan of Arc (1412-1431) as a peasant girl, but in fact her family was what we today would consider solidly middle class. They owned and farmed several acres. Isabelle spun wool, while Jacques also held a minor position in the village government as a tax collector. Yes, they were illiterate, the majority of people were back then. After Joan went to court the family was ennobled 1429 by King Charles VII, the former dauphin who Joan had brought to the throne. After Joan’s death, Isabelle moved to Orleans, where she received a pension from that city.

Turns out the apple didn’t fall far from the tree. While Isabelle’s life was far less spectacular than her daughter’s, she was an intelligent and tenacious woman who devoted the second half of her life to clearing Joan’s name. This required her to learn to read and write so that she could petition a series of Popes and argue her case before church courts, and to travel internationally. Over the course of four years from 1452-1456, the posthumous retrial of Joan’s case involved clergy from across Europe and concluded with her being cleared of all charges and labeled a martyr instead of a heretic. Incidentally, the crime for which Joan was burned alive was cross-dressing, and she wasn’t canonized until 1920.

So while Joan’s story is flashier and more sensational, Isabelle’s life was just as dramatic. Last summer The Berkshire Playwright’s Lab presented a reading of Emmy Award-winning writer/director/producer Jane Anderson’s play about Isabelle, Mother of the Maid, and here it is twelve months later receiving its world premiere on the Bernstein stage at Shakespeare & Company as a star vehicle for Tina Packer, with BPL co-founder Matthew Penn directing once again. This is the latest in a series of successful cross pollinations from the BPL to Shakespeare & Company, and it seems a healthy partnership.


The question Anderson poses is this: What do you do when your child’s life takes off on an extraordinary path, one you never imagined and over which you have no control? Anderson allows Joan’s father Jacques (Nigel Gore) to have his blustering say about his daughter’s situation, but only the youngest of her three real-life brothers, Pierre (Nathaniel Kent), appears here and he is not given much of a chance at an opinion, although he accompanies Joan (Anne Troup) to court and into battle. (In reality, Joan was accompanied by her brother Jean as well, and there was another brother, Jacquemin, and a sister, Catherine, about whom nothing is known and who Anderson presents plausibly as having died in childhood.) In the play Mother of the Maid the stage is Packer’s, even Joan’s story is only peripherally told.

Anderson’s play brings us Isabelle’s story during the period of her daughter’s dramatic rise and fall. Packer brings tremendous energy to the role, rendering Isabelle an ageless Everymother.

Our closest modern parallel to the story of the d’Arc family is probably the repeated tragedies of young celebrities and their families, only in those days it was the church, not some capitalistic economic behemoth, which made, and unmade, celebrities. A religious life provided young women with their only chance at two very important things – an escape from the terrors of childbirth, which was a death sentence for many, and the opportunity for an education. Joan experienced her first visions at age 13, just before she would have become capable of bearing children and therefore been expected to marry. Having holy visions was a socially acceptable form of contraception through abstinence. The male attire Joan adopted, and for which she was put to death, allowed her to fasten her hose, boots, and tunic together into one piece, which deterred rape. Women who choose not to reproduce have always been suspect, Joan was no exception.

Bridget Saracino as St. Catherine.While Joan claimed to have seen visions of several saints and angels, Anderson connects her only with Saint Catherine of Alexandria (305-313) who was martyred for refusing to marry the Roman Emperor Maxentius and sticking to her guns as a Christian. Notice a pattern of women being killed for refusing to become sexually active? Catherine was tied to a wheel and tortured, then finally beheaded. Anderson has Catherine (Bridget Saracino) act as the narrator in the play, appearing in a golden triptych which forms the central focus of Patrick Brennan’s simple set. Open, it houses the celestial. Closed, it represents the exterior of Jacques and Isabelle’s farmhouse. Catherine, and later Joan in full armor, are revealed in the triptych. Govane Lohbauer’s costumes are perfect, as usual.

Packer, Gore, and Saracino form the energetic core of this play. Troup’s Joan is lacking in the passion bordering on hysteria that must have carried her so far from home and all expectations. Anderson has created a rather one loud note character for Gore, but he brings all the wrath of a father who fiercely loves and wants to protect his child to Jacques’ explosions. In the end, of course, father does know best. Everyone would have been better off if Joan had stayed at home and married the nice boy next door.

Anderson casts Isabelle in the more supportive role of the parent open to new options and ideas for her daughter’s future. The penultimate scene, in which Jacques, not Isabelle or Pierre, stands vigil at Joan’s immolation, is heart-wrenching. Anderson follows the legend that Jacques died on his trip home from the execution, which may or may not be true although certainly Isabelle outlived him by several decades. Then Isabelle gets just a few lines to speak about the quarter century she devoted to clearing her daughter’s name. Perhaps another playwright will be inspired to bring the story of those years to the stage.

There is much that is anachronistic in Anderson’s script, including the language which is a modern American vernacular settled into the mouths of a medieval French family who, and I assume this is Penn’s decision, many of whom speak with English accents. British-born Packer, Gore, and Asprey, have them naturally, while Kent and Aspenlieder adopt them, and Troup and Saracino use their native American accents. I would be okay with swapping British accents for French ones as a way to delineate the relative class of the characters, except that the English are the enemies in this story. It is they whom Joan feels called to defeat, and they who capture and execute her. All in all rather a linguistic muddle that distracts from instead of clarifying the story.

Aspenlieder plays a Lady of the Court, who identifies herself as Nicole but who is given no name in the program. The character is a friend and ally to Isabelle and Joan at court, but while this character provides some insight into the existing class differences – Nicole has three teenaged daughters of her own – she does nothing to move the plot along. Aspenlieder’s very, very upper class accent is a bit much, but she has two delightful scenes with Packer and the actresses real-life personal and professional bond is much in evidence, as is Packer and Gore’s long standing partnership. Asprey is Packer’s real-life son and only child, which adds extra poignancy to the lines she speaks to him about Isabelle’s attachment to Joan.

I was intrigued by this play and this casting from the moment it was announced last winter, and the enthusiastic audience response at the performance I attended proves that I was not mistaken in this show’s appeal and ability to engage, especially since the majority of the company’s audience is of an age to have shepherded children through the drama of adolescence and into adulthood.