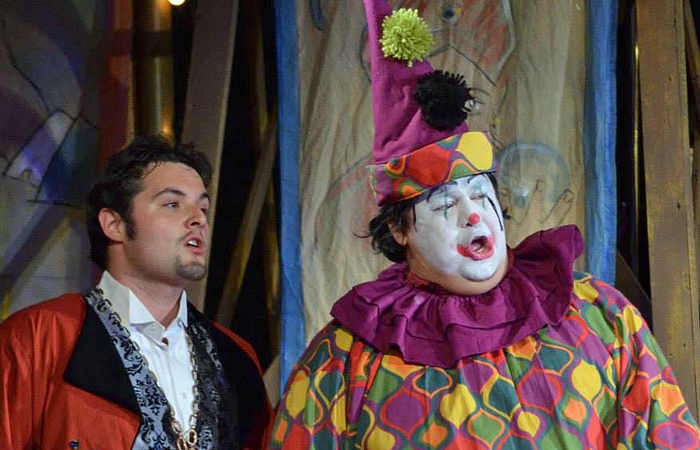 Use what talents you possess; the woods would be very silent if no birds sang except those that sang best.” – Henry van Dyke

I don’t misunderstand this opening quotation, the singers at Hubbard Hall Opera Theatre are excellent, but because they are young or because they just haven’t been at the right place at the right time yet, they are not in that elite group the world considers “the best.” And that is what this quotation is saying – there are many voices worth hearing. This quote also has a lot to do with why Alexina “Alix” Jones founded HHOT in the first place, she was tired of being one more soprano waiting around audition rooms for permission to make music, so she created a space where music could be made and has given hundreds of singers and musicians a chance to be heard as she has built an audience in a place where opera seems unlikely.

At intermission of Rigoletto one of my companions turned to me and said “Now THIS is how to experience opera!” We were sitting right on the floor, in some cases mere inches from marvelous professional singers belting out Verdi, with a full orchestra up on the stage in front of us. We were literally saturated in sound, and it was amazing. I had never seen or heard Rigoletto before – well, except for “La donna è mobile” which is probably the most famous opera aria in the world – and so the whole adventure was a new one for me. Up until this year Jones confined her major summer programming to comic operas, but now, in her 8th season she obviously decided that her audience was ready for some truly grand and tragic opera.

Rigoletto is based on a play called Le roi s’amuse (literally The King Amuses Himself) by Victor Hugo that ran exactly one night in 1832 before being banned by the government for ridiculing the Royal Family. Written in 1851, Rigoletto was performed many times in Paris before Le roi s’amuse was allowed back on the boards there in 1882, and Verdi and his librettist Francesco Maria Piave had a tough time getting the rights to adapt the play. One Austrian censor denied permission calling it “a repugnant [example of] immorality and obscene triviality.” Only when they moved the action of the opera from the royal court of France and renamed most of the characters – the bad guy is now the Duke of Mantua, a dukedom that no longer exists so no living nobles could be offended – was the opera allowed to go forward.

Stage director Kirk Jackson has moved the action to a small travelling Italian circus between the two World Wars in the 20th century. Rigoletto (Benjamin Bloomfield) is the clown, and the lascivious Duke of Mantua (Christopher Lucier) is the ringmaster. Rigoletto cruelly assists the Duke in his endless conquest and humiliation of women, which has earned both of them the wrath of the magician Monterone (Daniel Oakden) whose daughter, Page (Hannah Miele), has fallen into the Duke’s clutches, and early on he utters a terrible curse on them. When the circus roustabouts, who form the all-male chorus of this opera, spy Rigoletto with a young woman, they assume she is his mistress and plot to be revenged on him by abducting her and bringing her to the Duke for deflowering.

But the girl is actually Rigoletto’s beloved daughter, Gilda (Meghan Picerno), who he has kept locked away and sheltered from the world, allowing her only to go to church on Sunday. That tiny bit of freedom is enough though, and during those ecclesiastical outings she has fallen in love with the Duke, who has told her that he is a poor student. So when she is abducted and raped, she is humiliated and distressed, but still believes that the Duke loves her and begs her horrified and vengeful father to be merciful towards him. Even after Rigoletto shows Gilda the Duke wooing a prostitute named Maddalena (Monica Soto-Gil), she loves him to the point of being willing to die for him when her father sets him up for assassination by the knife-thrower, Sparafucile (Paul An). And so the tragedy ends with a young woman giving her life for a loathsome rat of a man and breaking her father’s heart in the process.

I do not have the musical vocabulary to do Picerno’s performance justice. She is, literally, a world-class soprano, and to watch and hear her perform that beautiful music in such close quarters was astounding. I hope that the opera world very soon elevates her to the ranks of “the best” where she belongs. Close behind her was Bloomfield, a powerful baritone, in the title role. These two not only sang beautifully, but are strong actors who really embodied their characters fully. The tragedy was all the more poignant as they brought the story to life.

Sadly, Christopher Lucier as The Duke had no such acting ability. He is a handsome young man, and he sounded great, but I never believed for a moment that he either lusted after the many lovely ladies with whose affections he toyed, or that he was a particularly nasty man. Since the libretto makes it very clear that he absolutely abominable, an important element of the story was missing.

Luckily both Daniel Oakden as the ominous, curse pronouncing Monterone, and Paul An as the serpentine Sparafucile really upped the villainous ante every time they took the stage. I was as terrified as Gilda as she waited in the dark for Sparafucile’s fatal blow – well, nearly fatal since she survives while rolled in a drop cloth long enough after being stabbed to sing another duet with her father. This is opera, after all.

While I have seen HHOT create very stylish sets, this year Carl Sprague went minimal to allow as many audience members as possible to fit into Hubbard Hall along with a full cast and orchestra, professional lighting instruments and supertitles. It is a snug fit, but the proximity adds to both the musical and theatrical excitement. Lighting designer Brittany Shemuga and costume coordinator Sherry Recinella’s work bring necessary light and color to the otherwise dark proceedings.

The orchestra of talented regional musicians under the baton of Maria Sensi Sellner sounded spectacular. What fun to play Verdi with professional singers! How wonderful to get to share your instrumental talents and let your musical voice be heard.

Which gets us back to the opening paragraph and the joy that HHOT brings to the little village of Cambridge, New York, and its environs every summer. Every August I look forward to making the beautiful, bucolic drive up to Hubbard Hall to experience great art in a simple place, and to share it with a community who values great music above multi-million dollar performance spaces and big name performers. Those things are lovely, but this is the real deal. Can’t wait for 2016!