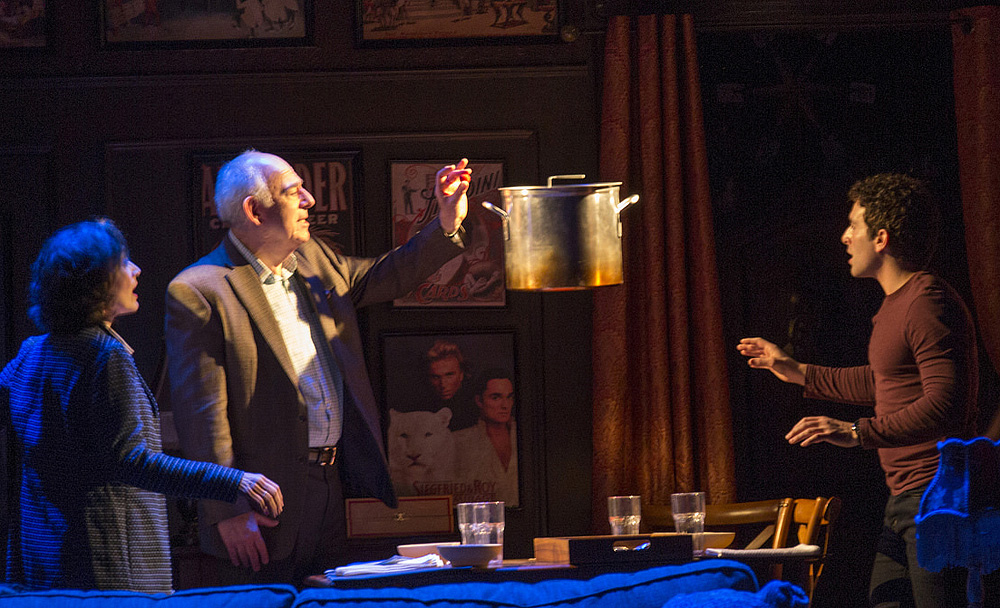 Many of the tools used by magicians are drawn from the theatre. Things like lighting, fog, scrims and mirrors are found in both forms of entertainment. Presto Change-O, now having its world premiere performances at Barrington Stage Company in Pittsfield has plenty of magic onstage, in a series of illusions created by Joseph Wartnerchaney and a cast that has obviously practiced their prestidigitations for hours to become proficient in such sleight of hand tricks as the classic cups and balls.

But Presto Change-O is first and foremost a different sort of musical drama with book and lyrics by Eric Price and music by Joel Waggoner. A company of six actors and five musicians put on a hell of a show that can be enjoyed on a number of levels and across a wide range of ages. The plot is, of course, a bit contrived in order to give everyone a chance to show off their magic tricks, and the songs give each of the actors their own moment in the spotlight. The title song “Presto Change-O” as sung with passion by Barbara Walsh as Mary is perhaps the best of the lot, though the quartets and quintets were also a marvel to see and hear as melody lines were tossed back and forth like a frisbee.

The story revolves around a family with three generations of magicians, driven apart by betrayals of both each other and of their magic secrets. This critic was delighted not to have to spend yet another evening with siblings squabbling over who an ailing mother loves the most, or deciding who went to bed with whom and why. Hurling rusty verbal daggers at each other is much more fun.

As Tina, Jenni Barber was the only character onstage who was not a family member, and is more smitten with illusions than with Michael (Jarrod Spector) though they do share a pair of duets together. Spector’s tenor is always a marvelous instrument to hear (he sang in Jersey Boys for more than 1500 performances) but Barber’s voice, especially as over-amplified in the theatre came out less well.

The set by Derek McLane was sweeping, with hidden nooks and crannies that came into play many times during the course of the play. It is meant to convey the feeling of an old fashioned Manhattan Townhouse, and in fact was so solidly built it didn’t look like a stage set at all. The lighting by Ken Billington was brilliant, especially in the way it could transform the space from a home into a theatre. The costumes by Alojo Vietti were bland enough to not get in the way of the story. The men were monochromatic, the women, well, meh. Tina, and the blanket for a shivering Michael were the two splashes of color on stage. Direction by Marc Bruni utilized a lot of resetting of the characters as the story flashed back and forward in time, one of the problems with the uneven book.

Michael Rupert as Lance and Bob Walton as Arthur each had memorable moments in the spotlight. Arthur, for example, was determined to get the family back together as a cruise ship act. Some of the musical’s backstory could be trimmed a bit, and while most of the songs had fresh approaches, there was a familial feel to them, which has its advantages. I would still go for a romance between Tina and Michael, and a real lovers duet.

Overall, this new musical is entirely enjoyable, and don’t be surprised to find that inside this promising production there is a sleek musical waiting its turn in New York City. And that’s exactly what the Barrington Stage Musical Theatre Lab is giving it a chance to do: find its legs, get some rewriting, renovations and sharpen up its focus.

It’s well on its way.